It is understandable that some things in life, whether you like it or not, would eventually come to an end. An end can come from all sorts of things, be it big and small. One of life’s biggest ends is of course death. It is one of life’s scariest things to even think about and no matter how people would try to avoid it, it is something that will happen to all of us. But I am not here to write about the big ends in life, I’m going to talk about one little end – sample employment separation.

It is about separating from a job you really had good times and fun in. It is one of life’s little ends because not only are you leaving the job you like, but you’re also leaving the people who have become friends and family. This does not necessarily mean you’re retiring, but rather just resigning and separating yourself from the company. No matter how emotional this can be, you have to be professional in addressing it to your management and to everyone else. This article will guide you on how to do that. 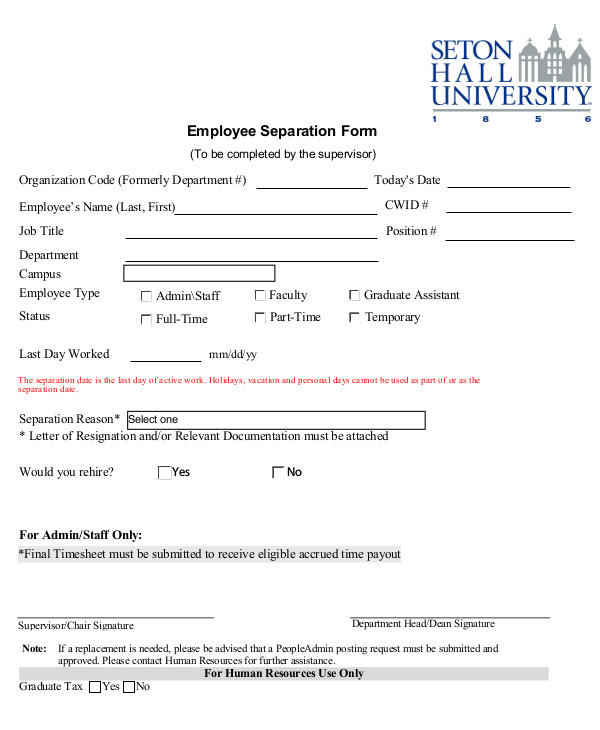 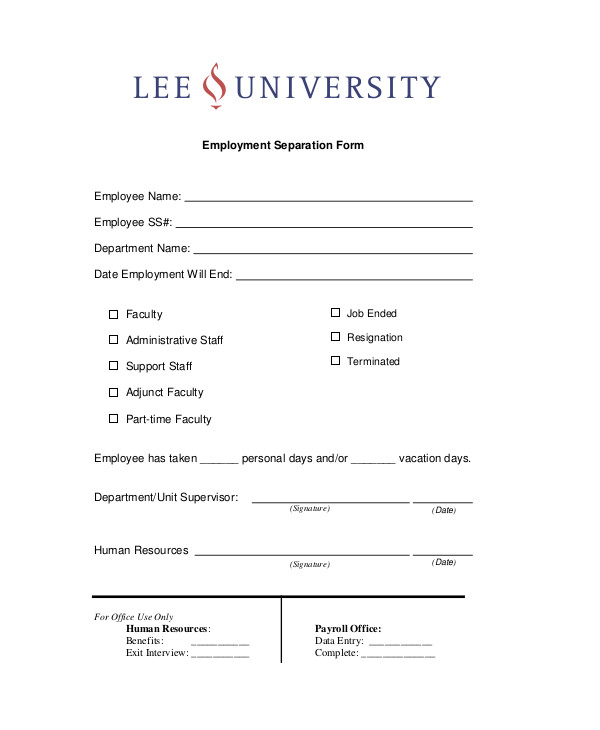 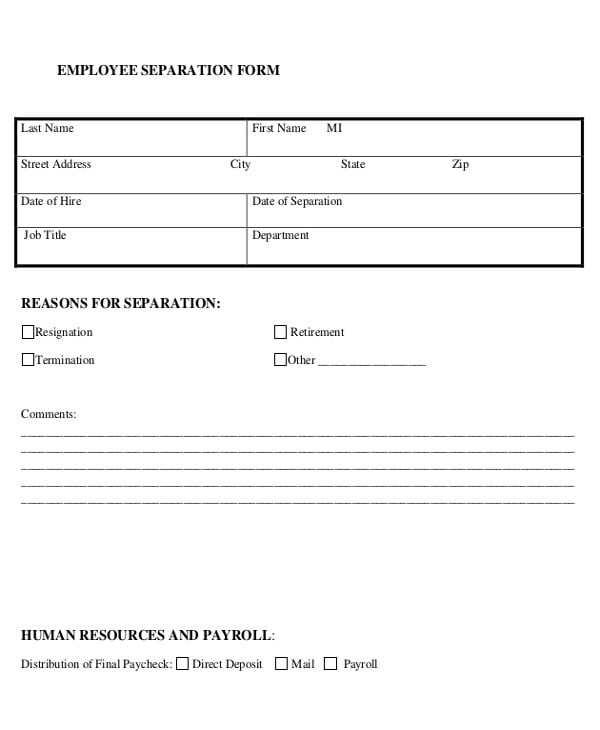 What is an Employment Separation Form?

It is generally understood what the meaning of employment separation is. Basically, this form is a resignation letter in which the employee would address to his or her employer stating the reason why he/she wants to depart from the company. Writing a letter requesting a resignation has to be formal and should follow a certain structure. It’s not just your regular love letter. You’re in a company, so practically everything has to be formal. The following sentences will serve as a guide for you in constructing your letter of separation or resignation from the establishment. 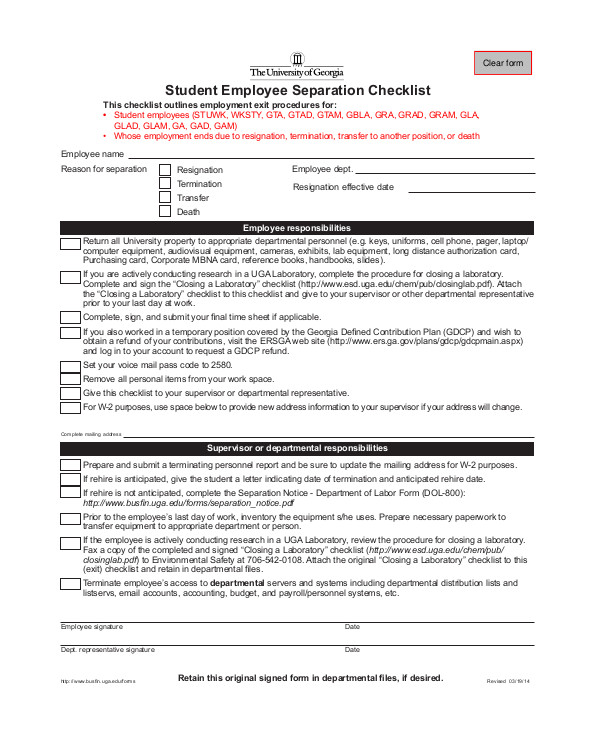 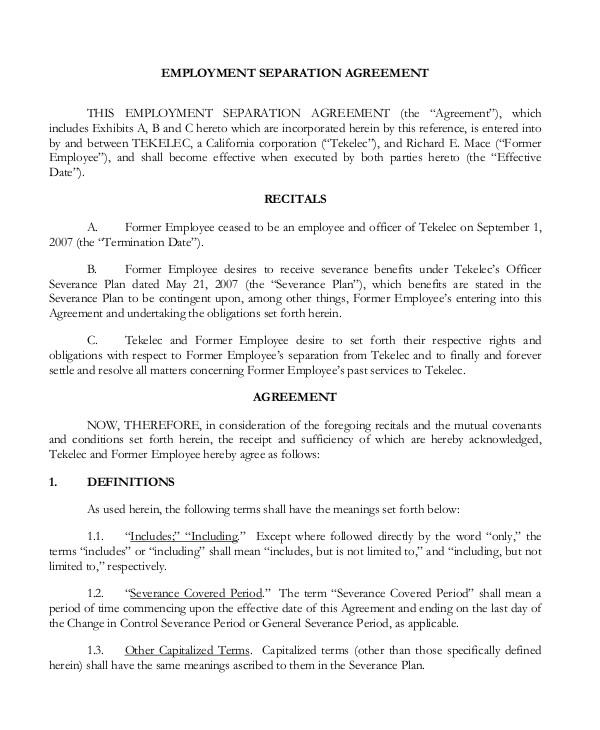 Writing this kind of letter is easy when you have already reflected on the topic and are aware of its consequences. But for those who have a hard time writing this letter, for whatever that reason is, we will guide you through it all. This part of the article will give you tips on how to write a letter of employment separation. These tips have a balance between a personal and formal approach. So here are the tips that you should take note of:

Since everything comes to an end, there is always a reason for it. It might not be reasonable if you let others judge the way some people make decisions in terms of changing their career path, but for those who have the strength to do so, it is as reasonable as it can get. In this section, we will state few of the many reasons why people choose to pack up and leave their job in search for the next and right job opening for them. These are the following reasons.

This might be one of the most obvious reasons why people would want to resign from the company. No matter how fun the workplace might be, if you’re investing so much and get so little in return, it can drive you to look for another job that would give you the income that you deserve.

If one is being mistreated badly by a group, it can make one leave. Bullying and grapevine communication can affect one’s productivity if it is too much. Everyone has their limits.

This is where one is already bored by doing the same routine all over again. Even if the job pays well, some people out there in the world desire to try something new and be challenged by it. Going out of one’s comfort zone is still one of life’s greatest constant practices.

4. If it is Still Meaningful

Meaningful in a sense that it gives the employee passion and purpose in the job. If the passion, for example, to help the needy are gone, so would the eagerness of the employee. This would make him/her search for another meaning, another purpose in his/her life to do that might contribute to himself/herself and to his/her community.

If one is so engrossed with work and do not have enough time for himself/herself, the love of self will always win in the end. Every human being in the world has to find time for himself/herself in order to catch up on the other beauties of life like being with friends, being with family or being with a loved one or pursuing some of the hobbies that he/she likes or exploring the world. He/she can never do that if he/she is all work and no play with his/her life. 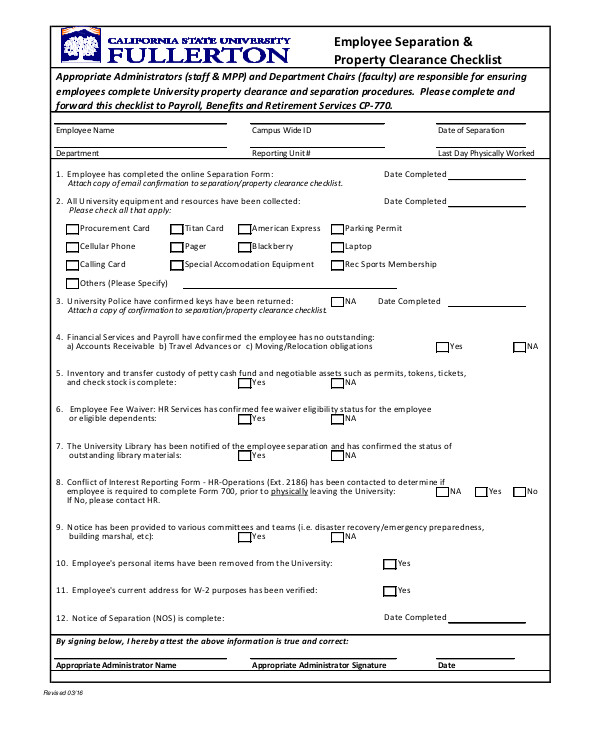 Before you arrange your things and leave on the final day of your relationship with the company, one good tip is to always make the days count leading up to that day. As much as possible, have a positive vibe in your workplace and forgive those whom might have hurt you and also say to those who you have offended. Hangout with your coworkers more and agree on days or holidays you guys can still get together and have a good time. Still, do your duties genuinely especially knowing that your days are numbered there in the company. This would ultimately let the company and it’s people miss you and have a good memory about. With this, the company may try to fight for you to change your mind and stay there at the workplace or because of you leaving a good performance, other companies would hear about it and would want you to be part of their workplace. Once that arrives, you start all over again and hopefully, stay longer.