A bill of lading is one of the widely used documents in the logistics industry. It plays a significant role in the transfer of goods between freight carriers and shippers. 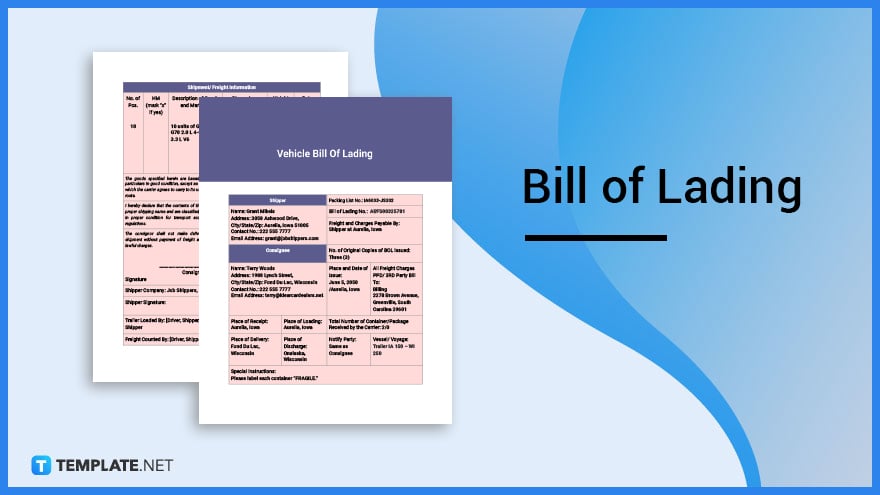 Download the Free Bill of Lading Article in PDF

A bill of lading or BOL is a document issued by an accompanying freight forwarder or carrier that details the list of shipments in a form of a receipt.

This document serves as a contract between the shipper, carrier, and consignee which indicates what goods are being shipped, their point of origin, and destination.

What Is a Bill of Lading?

There are a number of documents needed in order to ship goods from one destination to another, particularly across international borders. One of these documents is called a Bill of Lading (BOL) which is a legally binding document that must be executed or shipments cannot proceed. This is issued right after the customer has provided all the details and after the vessel’s departure from the port of loading.

10 Types of Bill of Lading

Parcels and cargoes are also normally transferred via trucks which travel for long hours from one border to another. A trucking bill of lading is a document that trucking companies are complied to prepare to ensure that the shipment’s details are dutifully recorded. This document also serves as a record for cargo claims.

A shipper is responsible for sending the goods; therefore, they too can be responsible for preparing a shipper bill of lading. This document should describe the type, quantity, and destination of the goods being carried. And it is important that the document is signed by an authorized representative from the receiver, courier, and shipper. 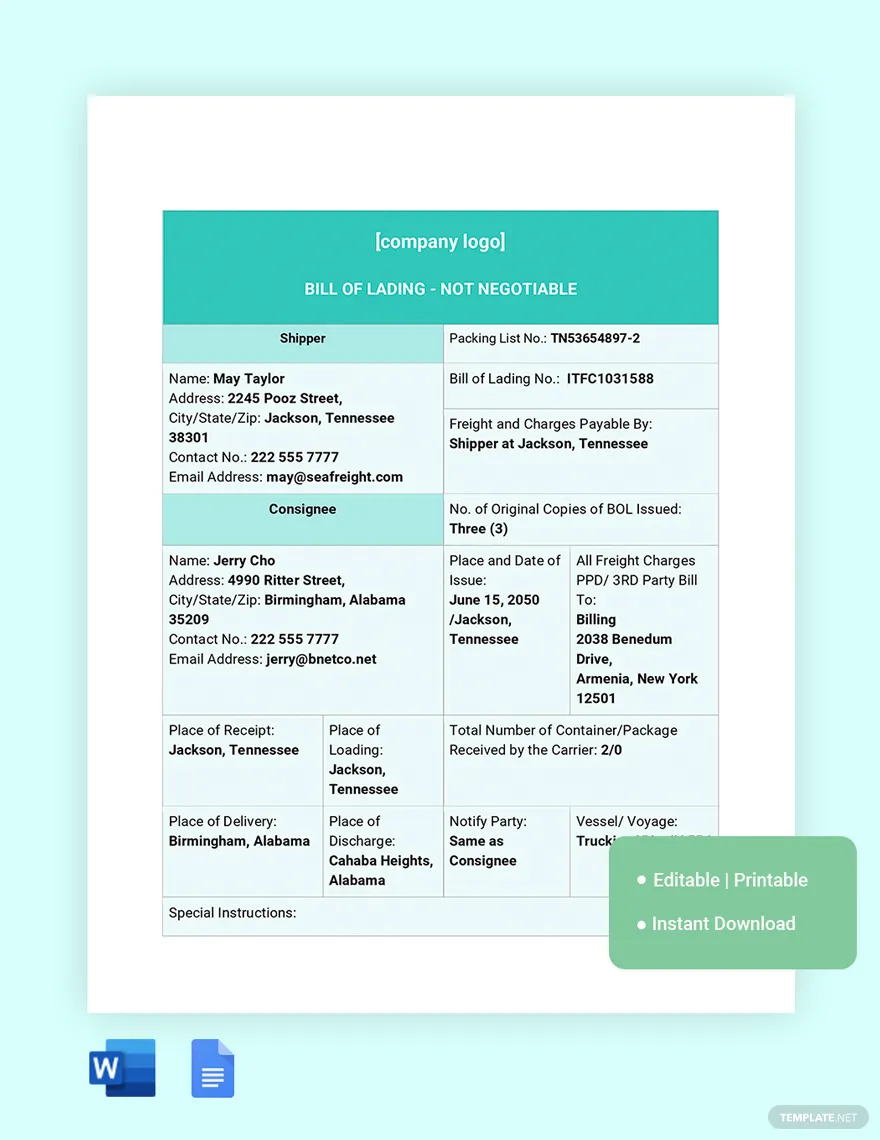 Companies that offer services to move goods across borders would need to prepare several essential documents. One of which is a moving company bill of lading which is included in their services. This document acts as a contract between the mover and the client and it should be duly signed. 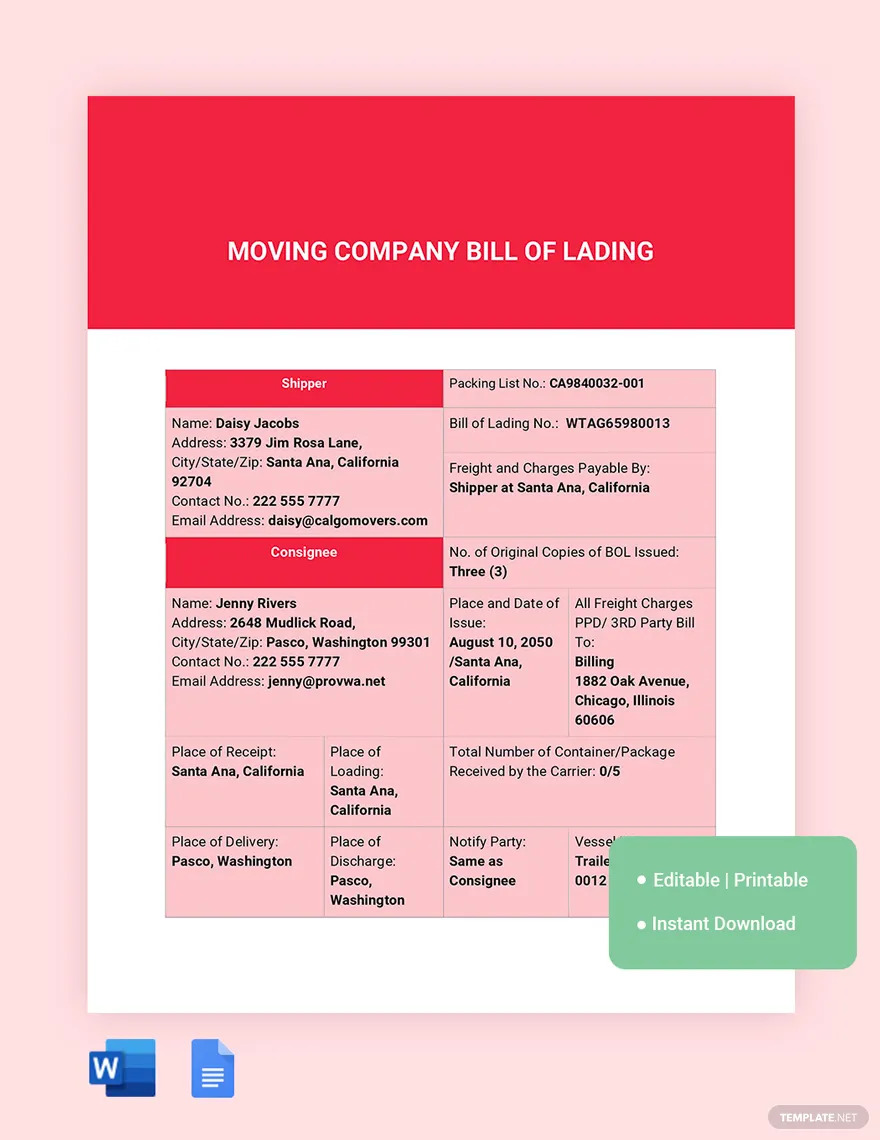 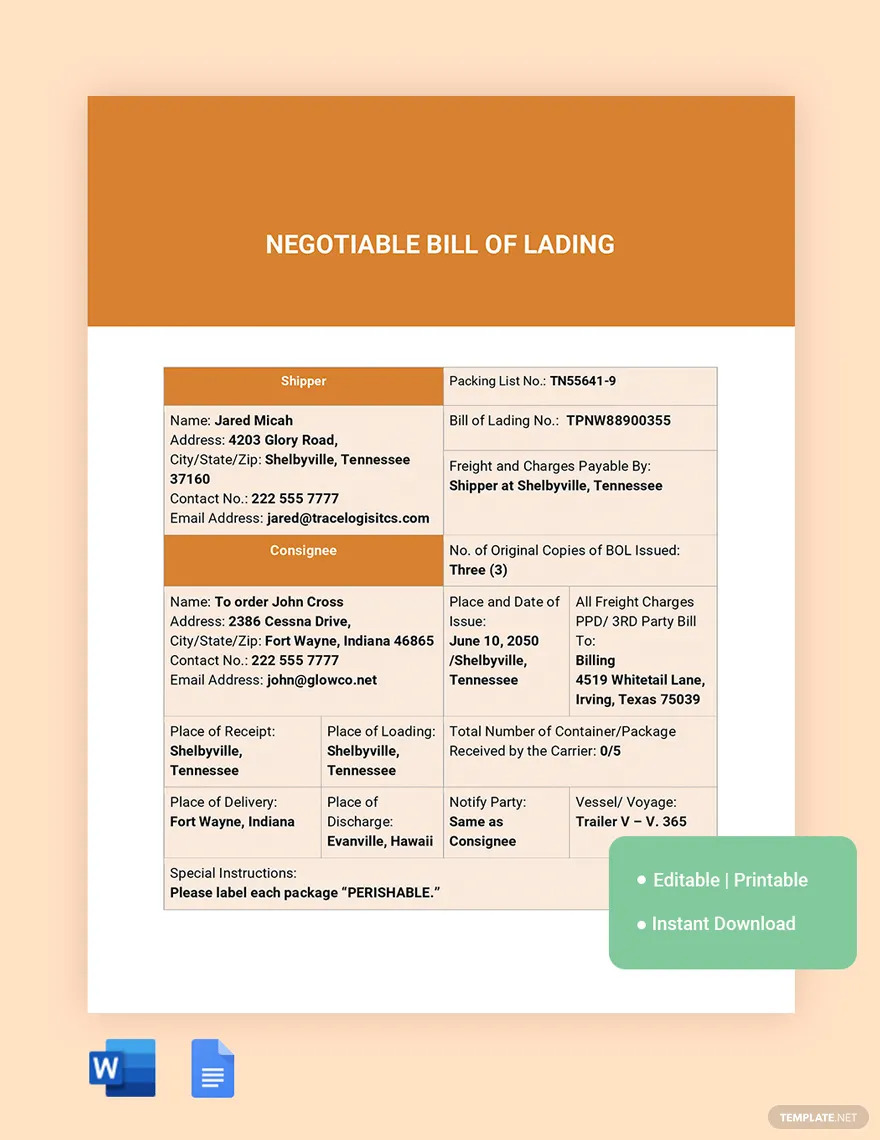 Whenever you ship a car using an auto transport company, then most likely you will need an auto transport bill of lading. This is a legal document that records the details of the car that is being shipped. This should also include how much was paid for the shipment.

A car or vehicle bill of lading is a binding document that provides the driver and the carrier with enough data needed in order to process the invoice and shipment. Without this document, it is impossible to proceed with the shipment thus making it a vital piece in the chain of shipping the vehicle. This BOL would serve as a receipt, a contract, and a document of title.

Another type of BOL is a house bill of lading. This particular document is prepared by a freight forwarder or a non-vessel operating company to be issued to the supplier once the cargo has been received. It is simply an acknowledgment receipt for the items being shipped.

Household goods are one of the many items that are constantly being shipped around the world. A household goods bill of lading is a legal document that ensures the successful shipment of household goods. The one in charge of its issuance is the moving company, which also includes all the important details of the move. 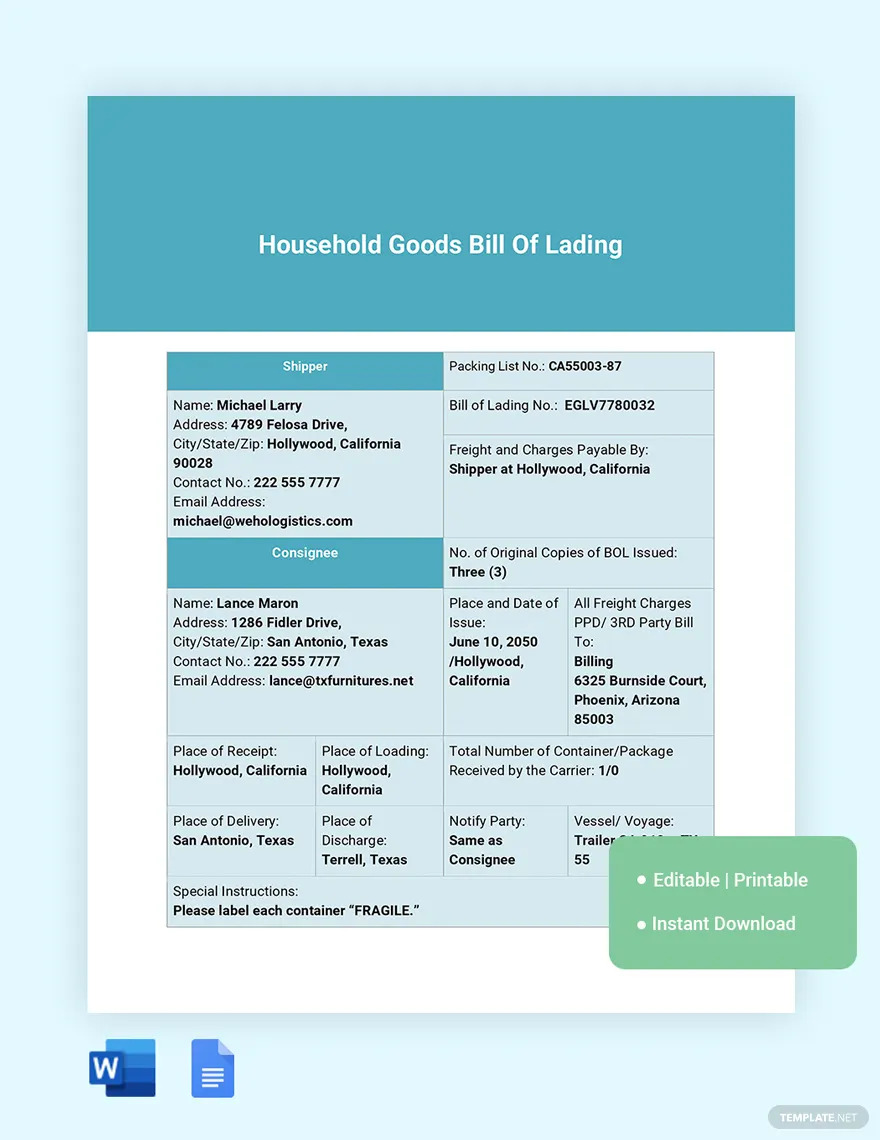 Carriers are in charge of different kinds of shipping documents, including a carrier bill of lading. Whenever a shipment has been made through their company it is their prerogative to prepare this document which will serve as a binding contract between the carrier and shipper and a document of title. Written in the type of goods that are being shipped, the quantity, and destination. 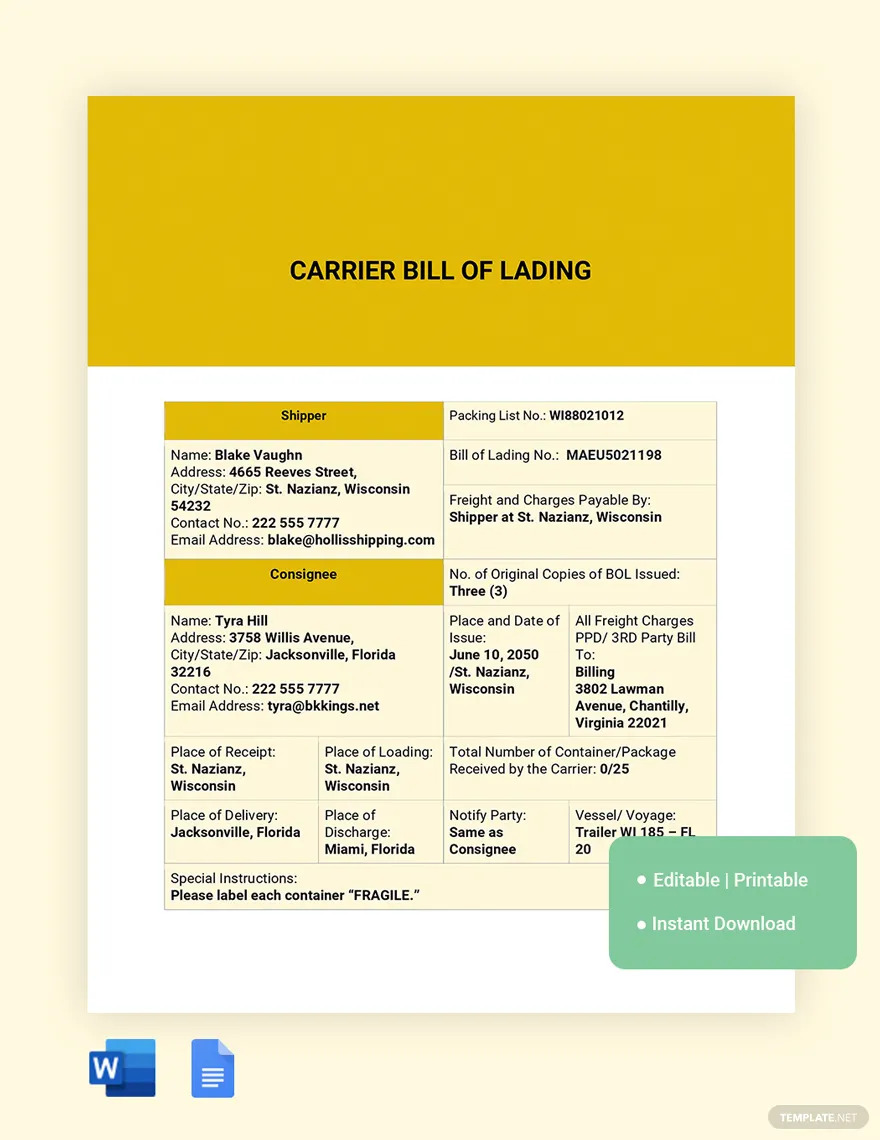 Although the use of hardcopies or paper bill of lading forms is still being practiced, a lot of companies have adopted the use of an electronic bill of lading or eBL/e-bills. This type of BOL is much more cost-effective and is easily canceled or re-issued in case there are any errors. Also, e-bills are easily tracked and monitored online, making them convenient to use.

A bill of lading is an important document needed by a shipper and a carrier or forwarding agent. It is vital that there is documented proof that the shipment has been dutifully received. Without this, shipments cannot be executed as this would provide a trail of information that would help protect the rights of the sender.

One of the major functions of a bill of lading is that it serves as a document of title. A person who is in possession of this document can receive, hold, sell or dispose of the goods it covers. This would serve as verification of ownership.

A bill of lading acts as a receipt or proof that the shipment has been received in an acceptable condition and is ready to be shipped by the agent. It is crucial that once a shipment has been processed, shippers would need documented evidence that the parcel has been collected. This is to avoid any discrepancies or issues during and after transit.

When shipping cargo or a parcel, a bill of lading would point out the terms and conditions for the transportation and delivery of the shipment. This section is important because it promotes transparency and would help manage everyone’s expectations. With this, everyone is aware of what are the risks and conditions when shipping parcels.

Ensure That the Shipper Is Paid

A bill of lading serves as evidence of the contract of carriage. This is defined as the legal responsibilities of the carrier and the user. This also constitutes duties and liabilities of parties to the contract, addressing topics such as acts of God and including clauses such as force majeure.

What’s In a Bill of Lading? Parts?

The name, address details, and contact number of the shipper who is shipping the cargo should be included in the document.

The consignee or the receiver’s details such as the name, address, and contact number are written in the document. They are legally allowed to receive the document, thus the details must be correct and true.

This is the name and address of the person who should be notified once the shipment has arrived. Sometimes the names of the notifying party could be the owner or a clearing or forwarding agent.

This is a unique alphanumerical number that is designed for a particular shipment and is covered under a specific bill of lading.

This is a specific number that is directly associated with the shipment which is used by forwarders or the client to trace their parcels or cargoes.

The shipment date, together with the place of issuance, is written in this document.

This would include the quantity, weight, declared value, destination, and freight classification.

If ever the shipment has special or unique instructions, this should be written down in the BOL document as well. 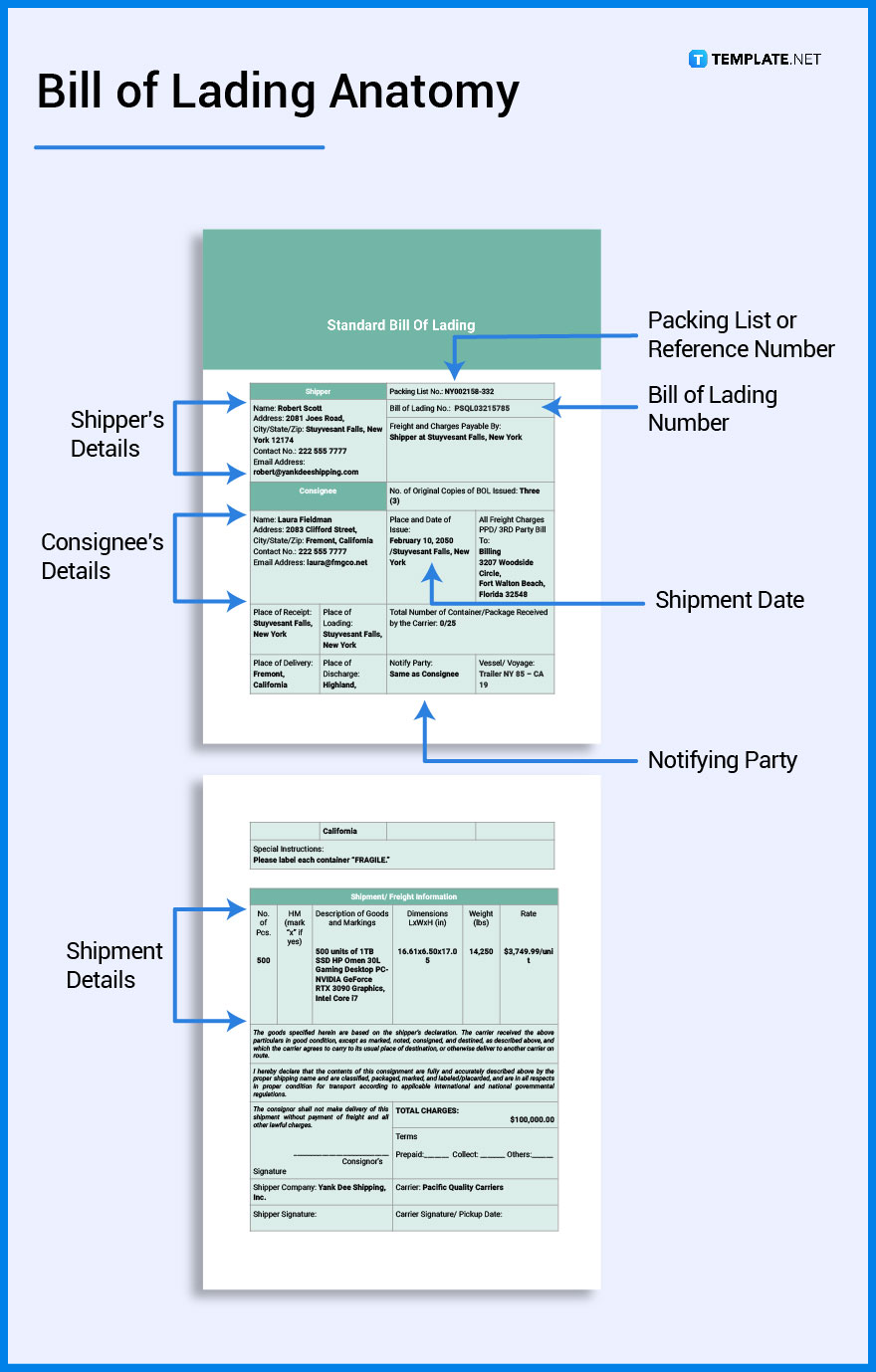 How to Design a Bill of Lading?

1. Choose a bill of lading size.

2. Decide on the purpose of the bill of lading document.

3. Select a bill of lading template.

4. Customize the template and add all the necessary details.

5. Add any graphics or logos. 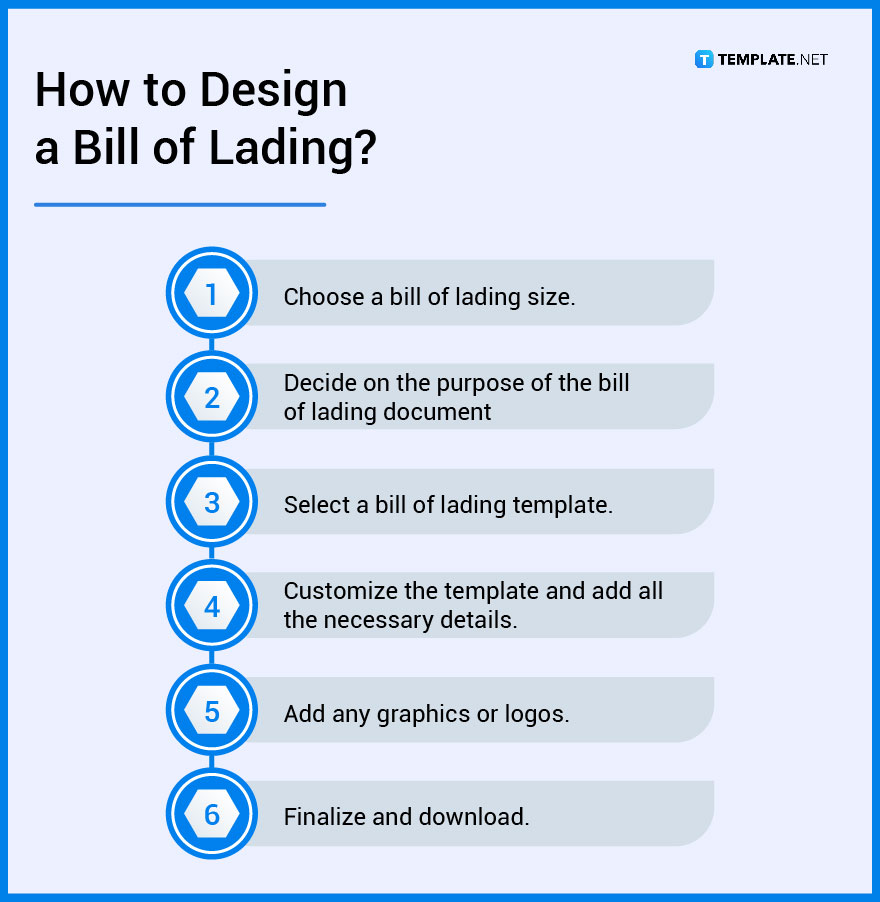 Bill of Lading vs. Bill of Exchange

A bill of lading is a legal document issued by a logistics company to the shipment owner which serves as an agreement of the goods being shipped.

A bill of exchange on the other hand is a written order which facilitates the shipment’s financial transaction between both parties.

What’s the Difference Between the Bill of Lading, Sea Waybill, and Freight Bill?

A bill of lading is a valid contract of carriage, is negotiable, and accepted in banks as a title of credit.

A sea waybill on the other hand is used for regular shipments between companies, which do not require settlements through banks or third parties.

A freight bill is an invoice that contains a detailed description of the financial components of the agreement or the BOL.

A bill of lading is an essential document that contains a lot of important data needed to ship items from one port to another. To ensure you’ve got all the details covered, here are the commonly used bill of lading size standards that are applicable for this type of document. 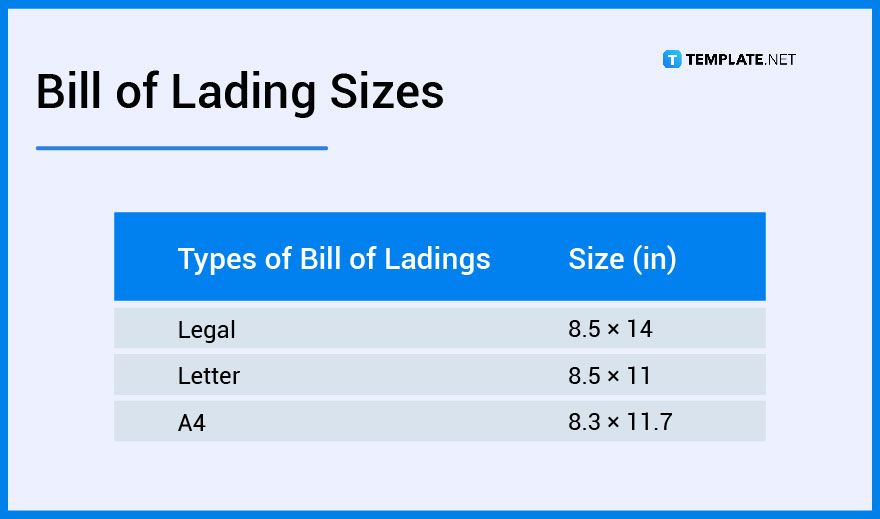 Bill of Lading Ideas and Examples

A bill of lading document is used in shipping goods of all kinds. To learn more about this we’ve got a list of the bill of lading ideas and examples you can use to give you an understanding of how to create this document.

What does a bill of lading contain?

A bill of lading contains the names and addresses of the shipper, the consignee, date of shipment, description of the goods, quantity, value, weight, and freight classification.

Who creates a bill of lading?

Those who are responsible for creating a BOL are the shipper, the carrier, or the 3PL (third-party logistics) working on the shipper’s behalf.

Why do you need a bill of lading?

This document is needed because it serves as proof or as an acknowledgment receipt for the goods shipped.

What makes a bill of lading negotiable?

A BOL becomes negotiable when the shipment is endorsed by the consignee to another consignee or third party.

How do you endorse a bill of lading?

You will need to make use of a blank endorsement on a bill of lading, thus the bill of lading is now classified as negotiable, which means the ownership of the goods is being negotiated while the cargo is in transit.

What are the main features of the bill of lading?

The main features of a bill of lading are the shipper, consignee, and parcel’s details, BOL number, and reference number.

Why is a bill of lading required?

A bill of lading is required because it is a document of title; it also serves as a receipt of the goods, and it contains the terms and conditions.

How do you create a bill of lading?

To create a bill of lading, you can use our templates made available in this article or simply fill up a ready-made form that has all the basic details common in all BOL documents.

Why is a bill of lading mandatory?

A bill of lading is mandatory because it is needed in order to move shipments since it serves as a legal contract between the carrier or forwarder and the shipper.

What is the marine bill of lading?

A marine bill of lading is a contract between the shipper and an ocean transport carrier.