A Likert scale is most frequently used in a survey questionnaire and is a helpful tool that can gauge how much you agree or disagree about something. This type of scale, when used in a survey, can make complex opinions much easier to understand. 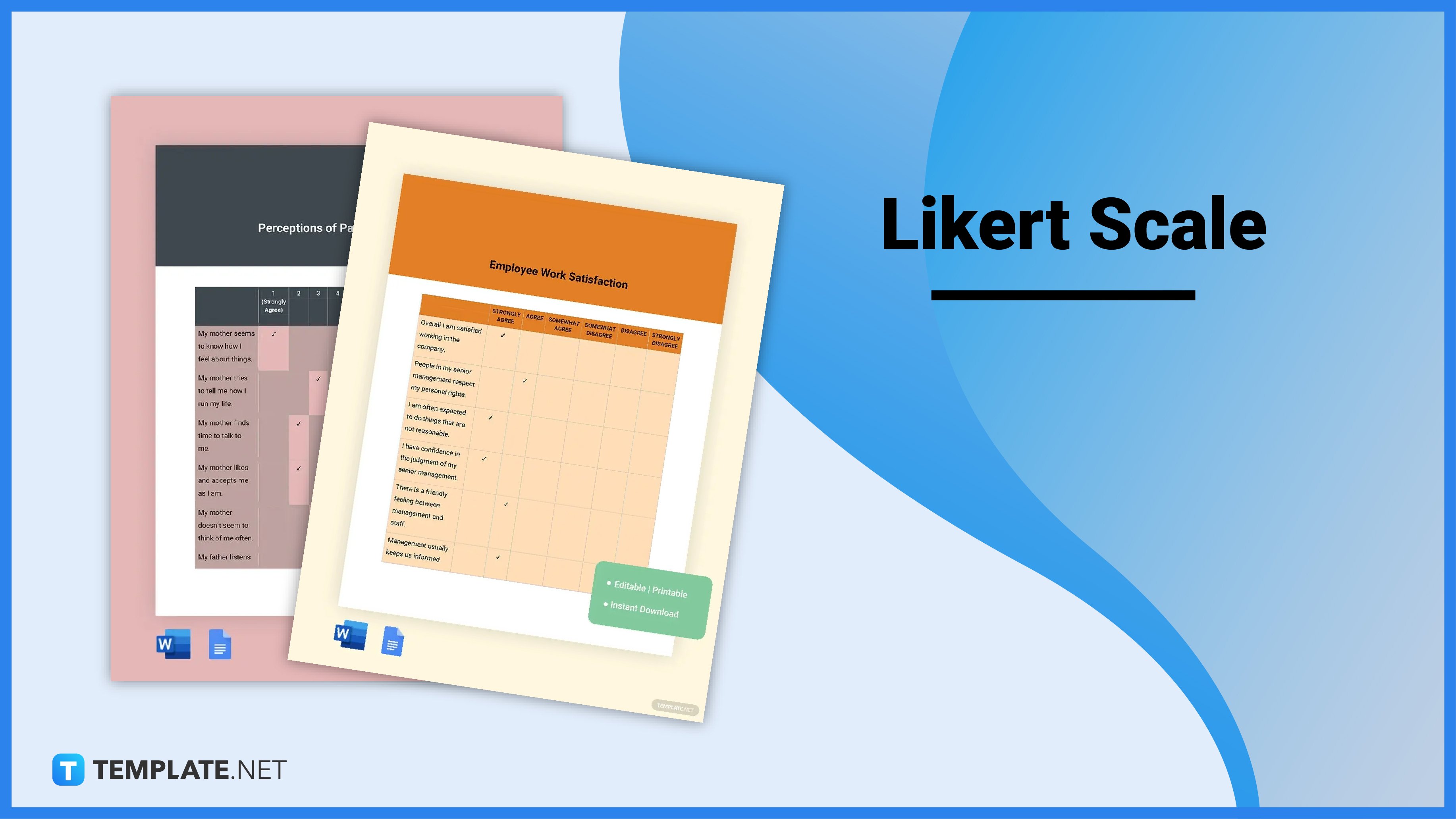 A Likert scale refers to a unidimensional rating scale that is used by researchers to collect attitudes and opinions about different data such as products, brands, or scenarios.

It’s named after its inventor, Rensis Likert, and is often interchangeable in its use with a rating scale.

What Is a Likert Scale?

A Likert scale is a psychometric scale commonly involved in research that makes use of questionnaires. Questions in the Likert scale are usually single-choice and close-ended in format. Respondents find generally that engaging in this type of questionnaire is much simpler since they can easily understand the intent of the scale, which helps them quickly formulate a response.

A 5-point Likert scale is a response scale in which the responders specify their level of agreement to a statement in 5 points. It can also be used to measure the rate of satisfaction or to measure frequency. The sentiment levels in this type of Likert scale should provide a reasonable array of opinions that provide a rich understanding of attitudes towards an object or a situation that the researcher wants to evaluate. 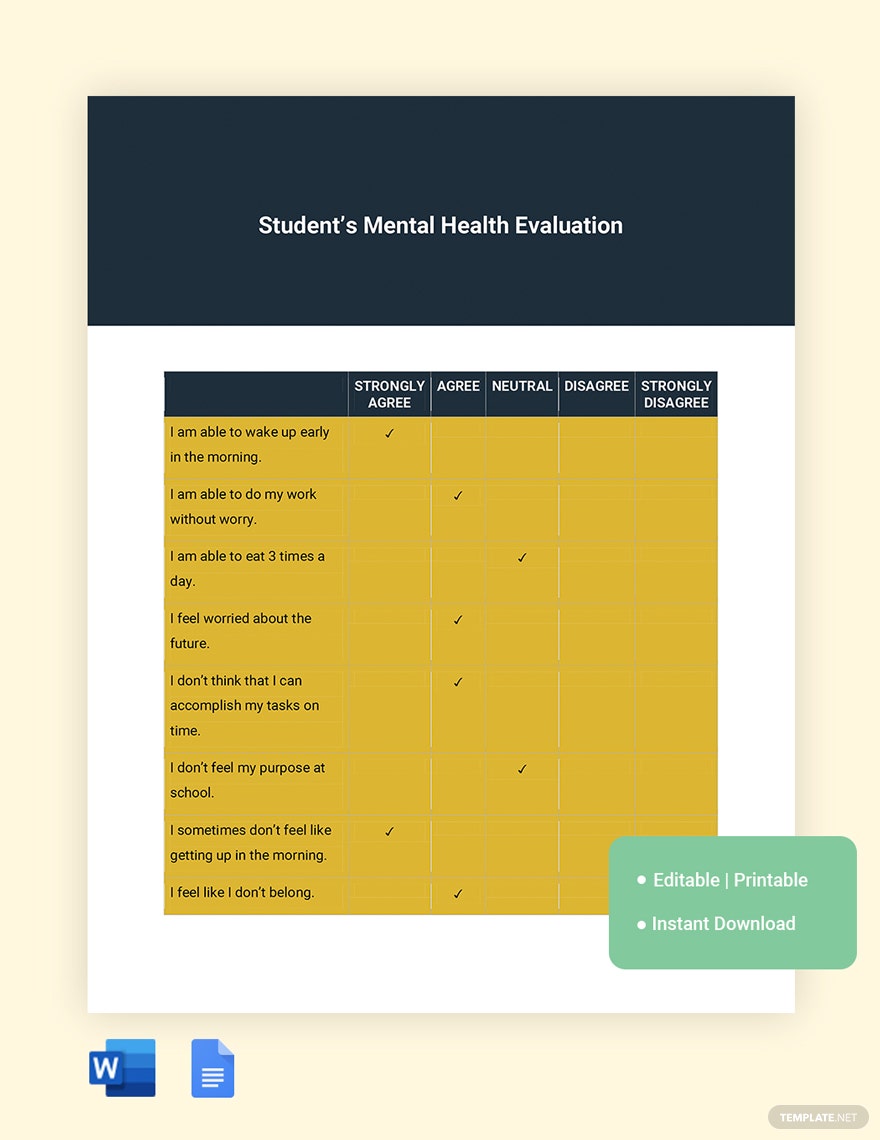 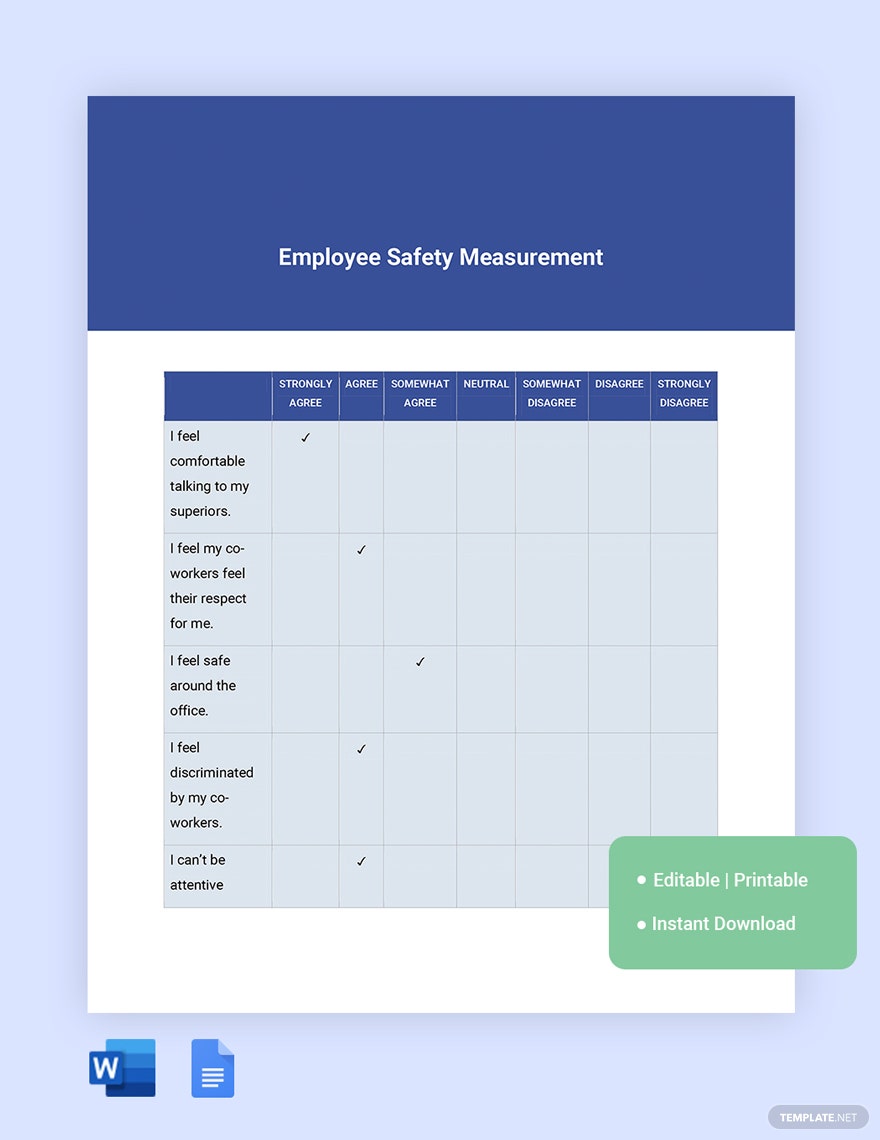 The 10-point Likert scale serves as an alternative that can be used aside from the more prominent rating scales. Also known as the 10-point survey scale, this gives a much wider spread of options to the respondents and should yield clear results. It can be used after a product launch or a new service launch to make sure that the customer’s overall satisfaction with the brand is properly evaluated. 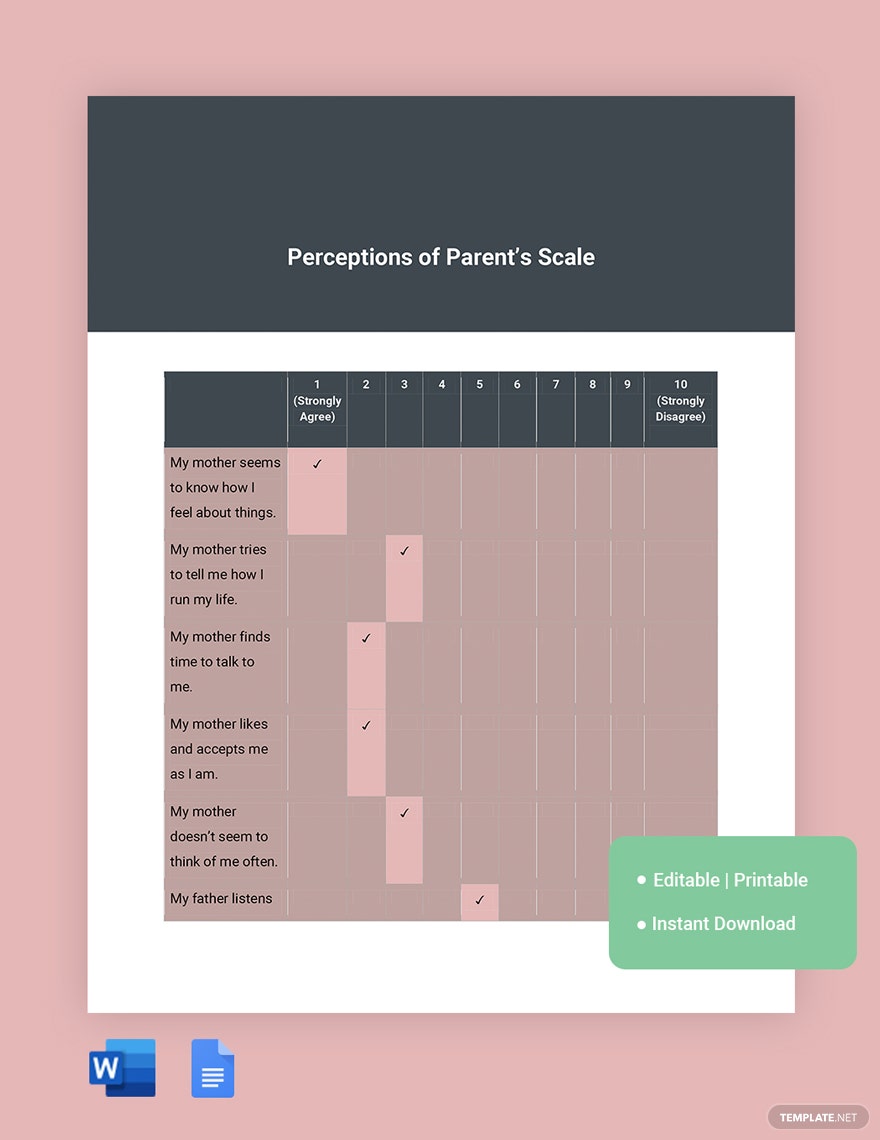 A 6-point Likert scale is different from the typical ones since it encourages the users to really make a careful analysis of the questions and make a choice that tends to go on the positive or the negative side. This type of rating scale doesn’t have a neutral option, which can be an easy way for respondents to answer lazily. Additionally, an even number of items on the rating scale can be advantageous since it creates groupings that are easier to understand and discuss. 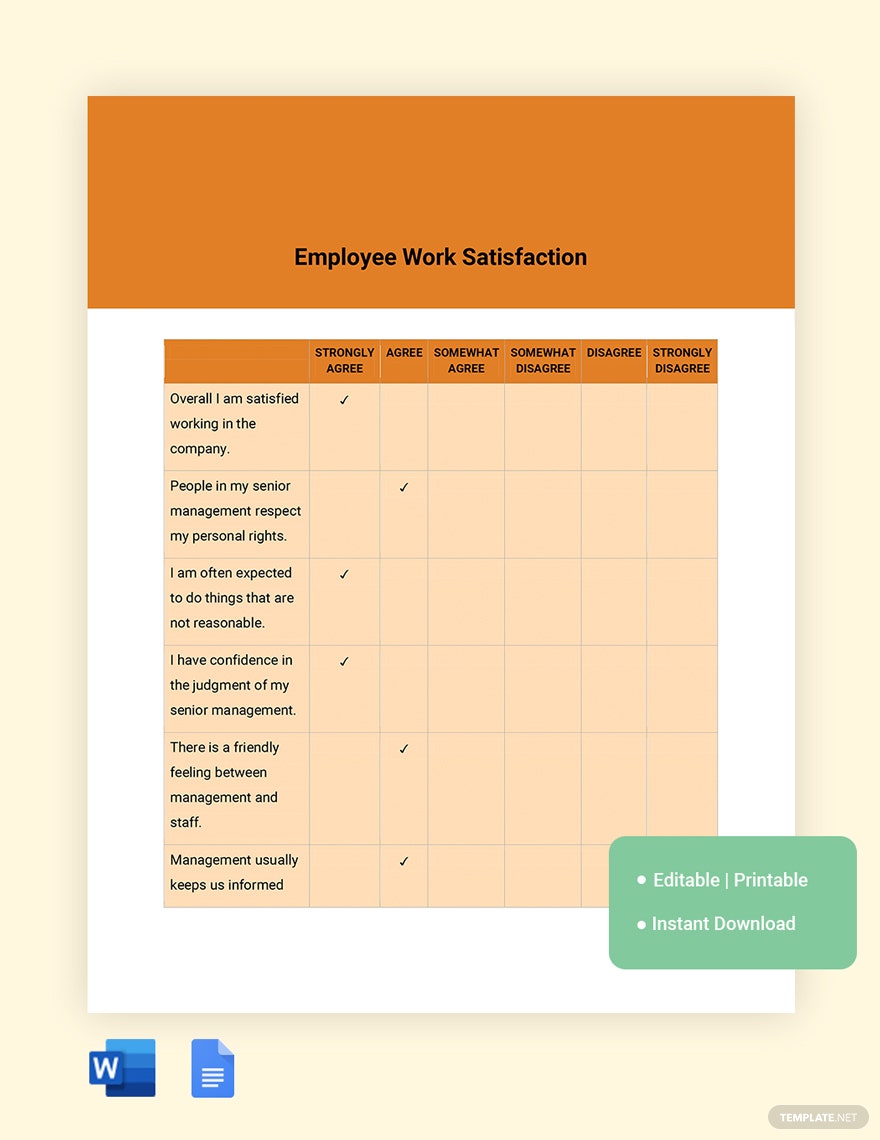 A survey Likert scale consists of questions that are laid out in a scale and these questions are used in a survey. This is one of the most widely used types of questions and they usually provide specific choices based on agreeing or disagreeing on a particular topic. They are important in measuring a respondent’s opinion towards a given subject and are considered to be an integral part of market research. 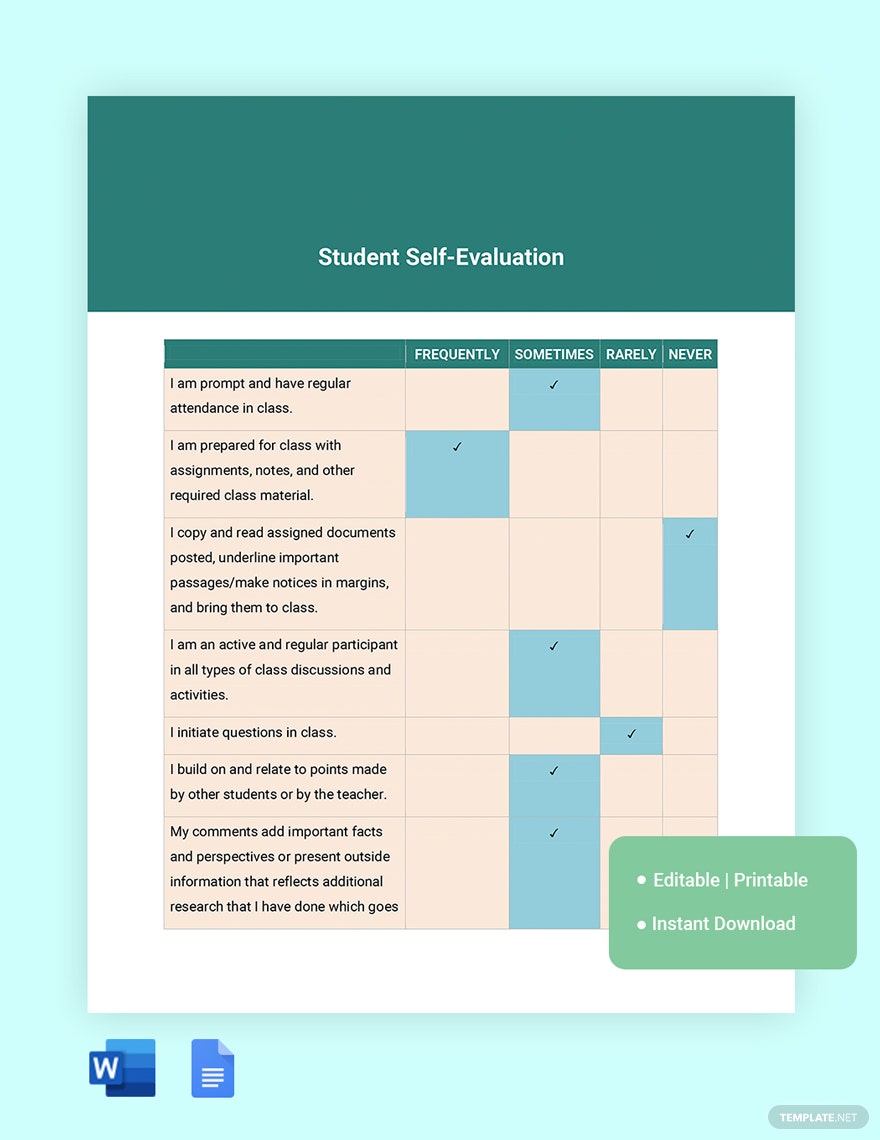 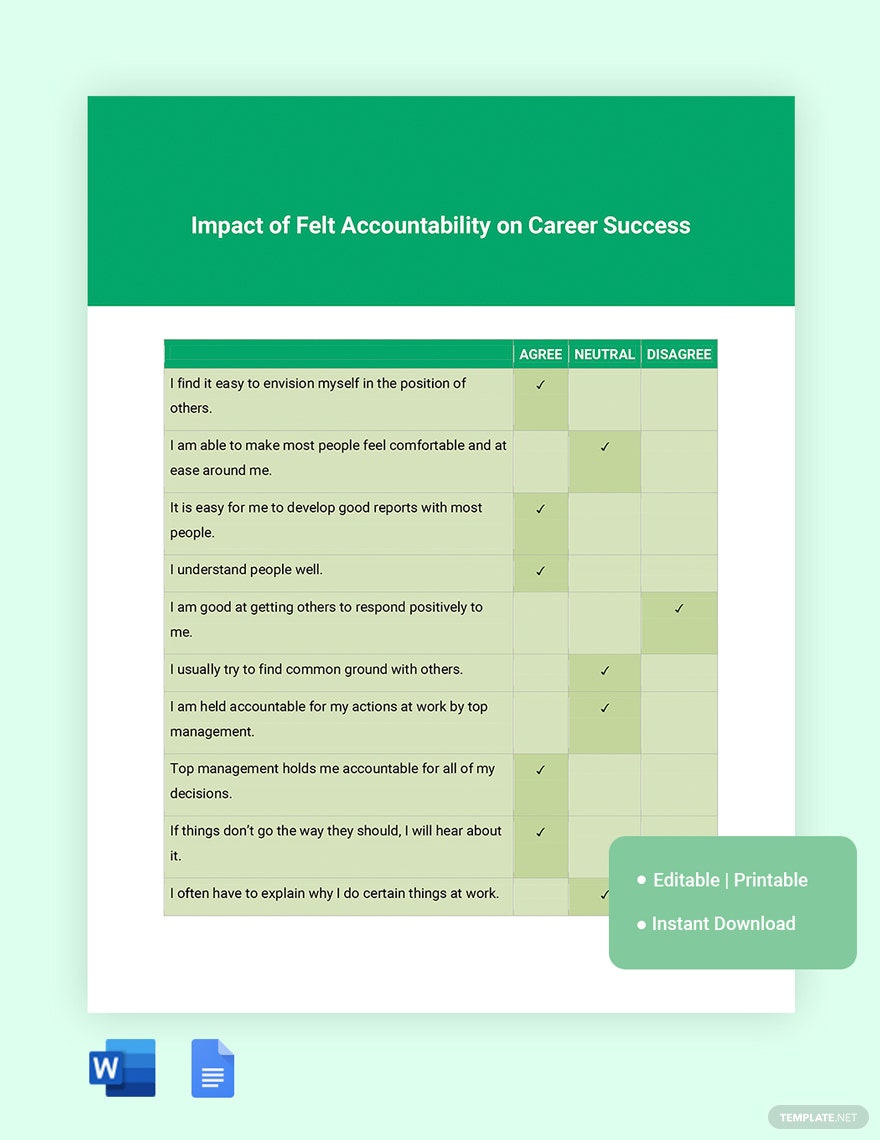 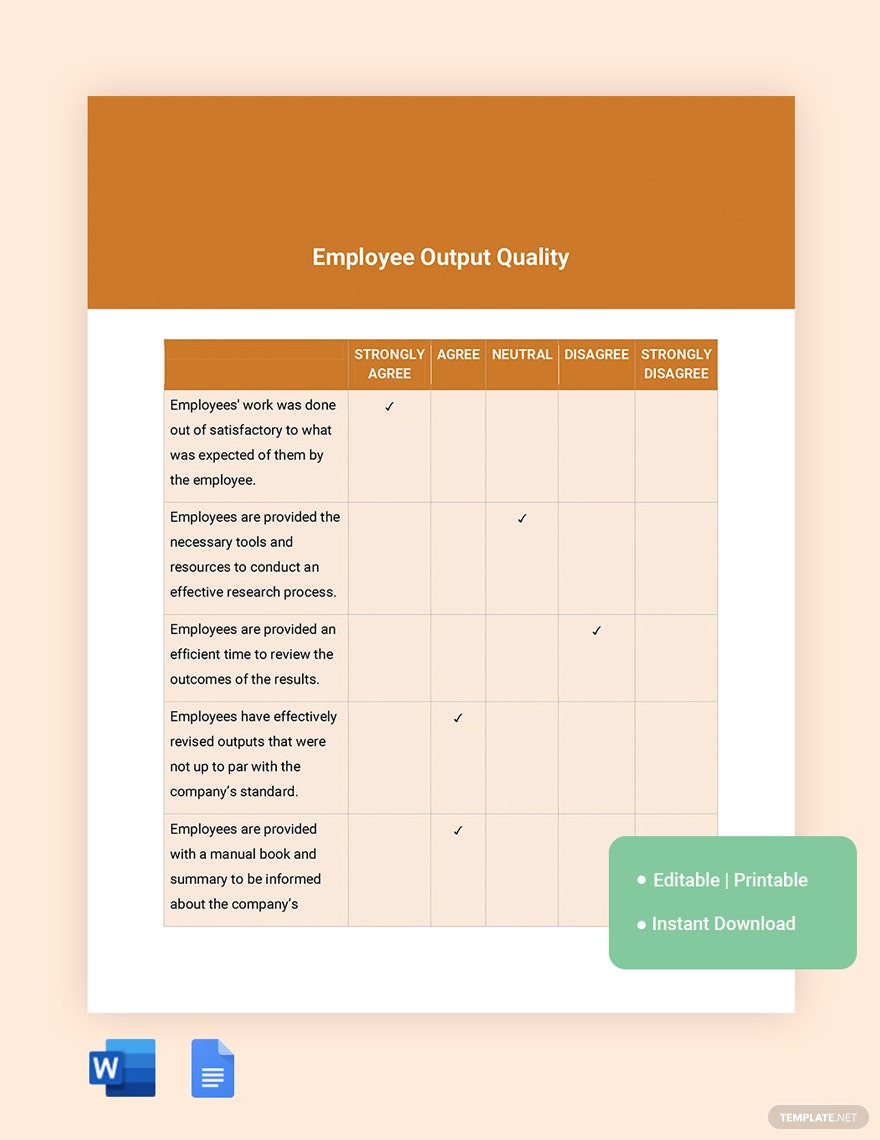 Likert scales are psychometric scales used in research that employs questionnaires. A modern Likert scale can be similar to this, only that this can also include more visual elements such as faces or a graph. This type of Likert Scale can also tackle areas that have become a significant talking point in today’s modern age, such as the management of kids inside of a classroom, performance anxiety issues in a workplace, and so on. 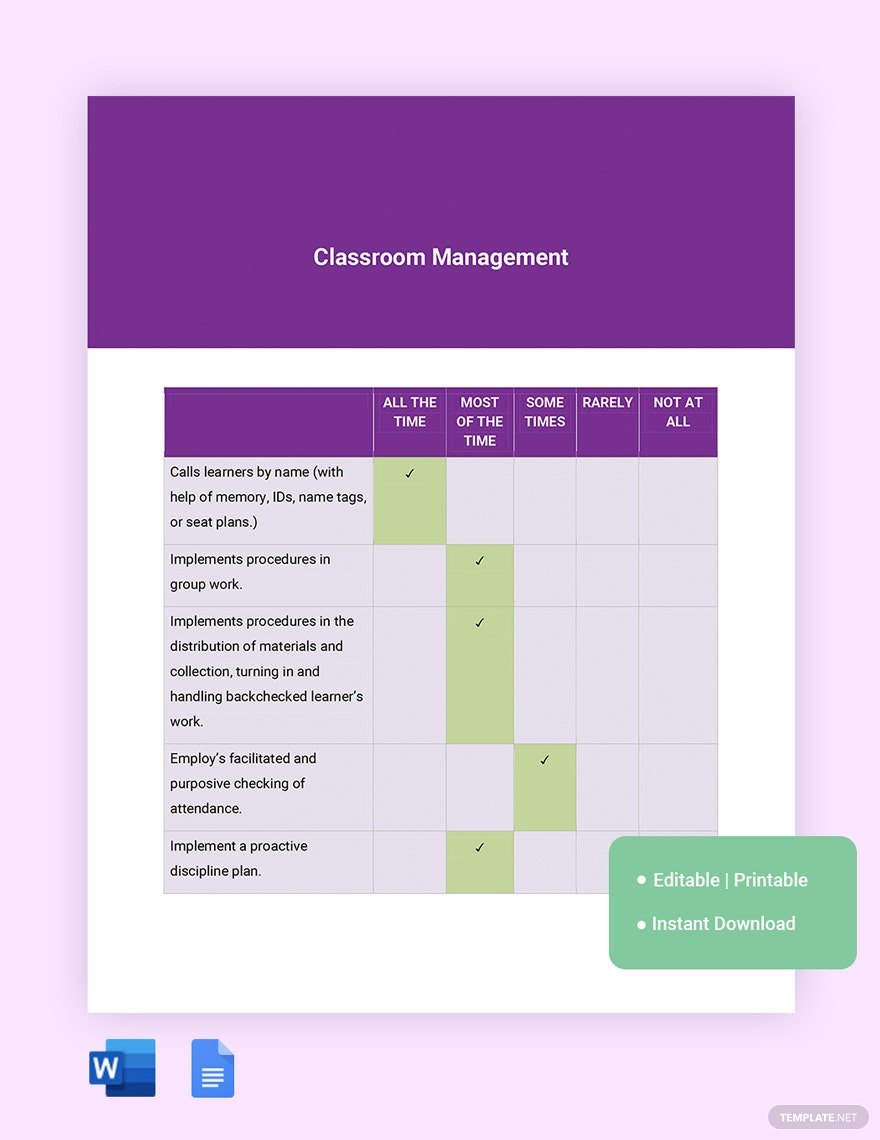 A 4-point Likert scale forces the user to form an opinion, which makes it a forced Likert scale due to the limited options without room for a middle ground. This can also be an ideal scale to use for market researchers since they usually require specific responses. However, this poses a disadvantage since it forces a choice even if a respondent has no opinion on a particular topic, which can lead to the respondents not even answering at all. 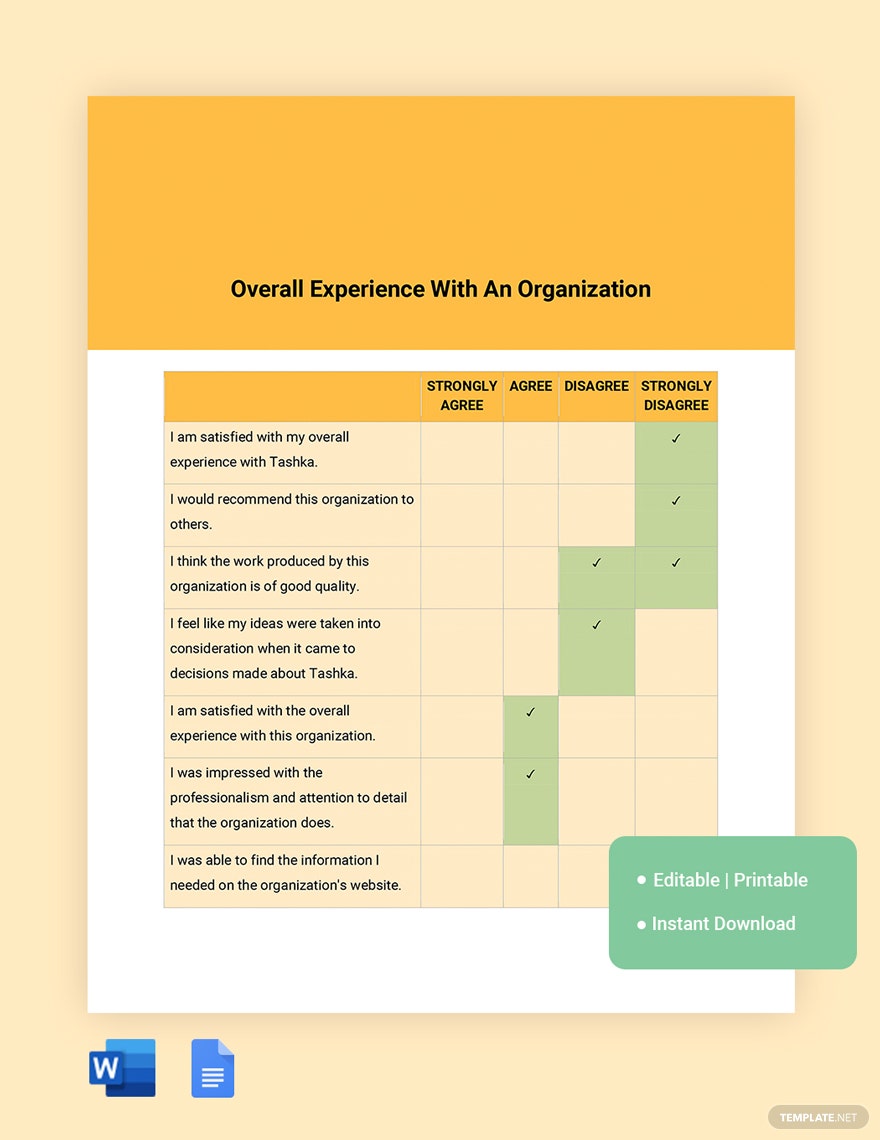 An analysis Likert scale essentially provides the respondents with options regarding the analysis of a particular topic. This can include an analysis of conservation initiatives whether they’ve made a significant impact or not, or it can also center on analyzing an employee’s performance inside the workplace. Additionally, after performing the survey and before starting an analysis of the answers, it’s key to determine the type of data in the survey, whether it is interval or ordinal data. 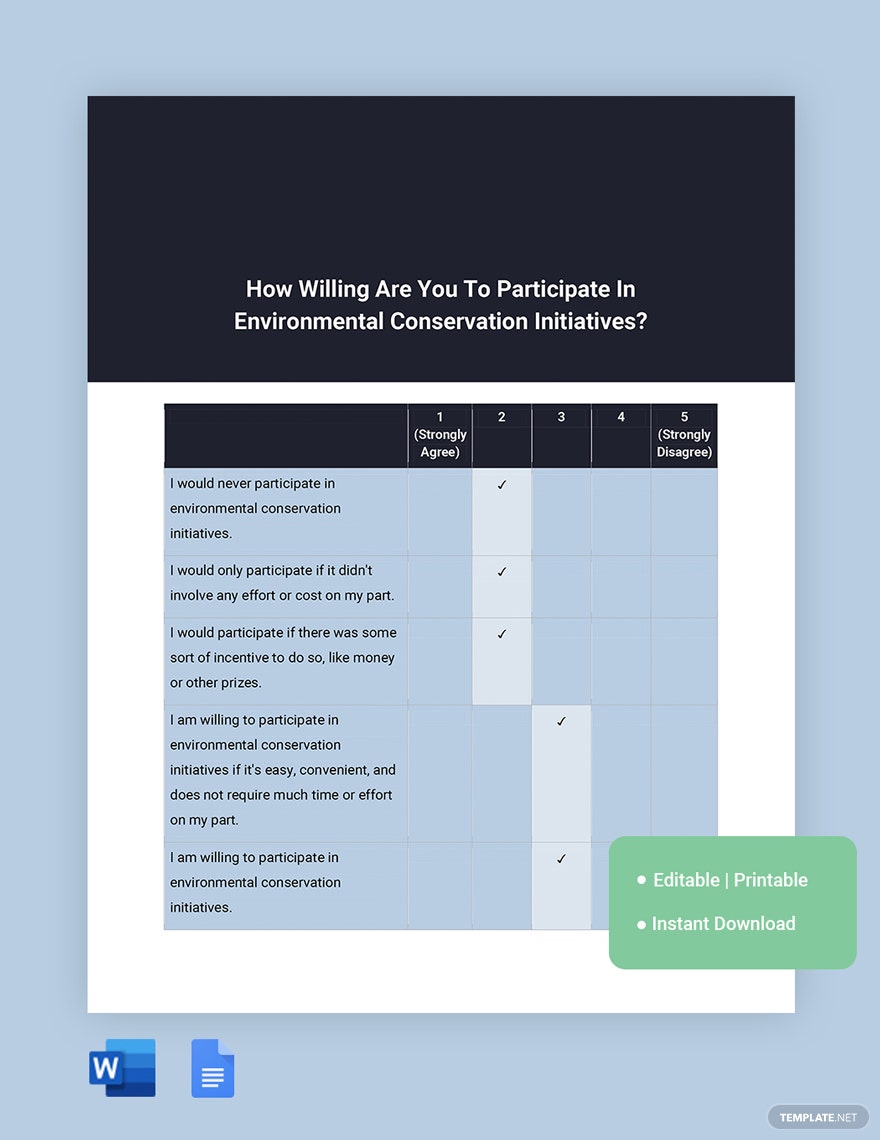 Likert scales rank high in their effectiveness in measuring opinions, perceptions, and behaviors. Additionally, using a quantitative data collection method or tool such as this one enables the researchers to understand the sentiments of their respondents. Here are some other uses and importance of a Likert scale.

Likert scales are useful tools for the evaluation of employee engagement. By conducting a survey on their employees, companies can make use of a Likert scale in order to keep tabs on the engagement and sentiment of their employees in the workplace. They also help companies gauge the levels of agreement that the employees think on a particular situation.

Likert scales are ordinal scales that can be used in customer satisfaction surveys to allow them to rank their opinions. Likert scales in this use case are usually flexible, as they can be used to measure a variety of sentiments, including satisfaction. The options that the respondents can choose in this survey range from “very satisfied” to “very dissatisfied” with a neutral option in the middle.

They serve as an easy valuation tool

Likert scales provide a very simple and easily comprehensible scale for valuation. This is because this type of tool allows the researchers in a survey to quantify the intensity of the answers of their respondents. By being a relatively easy valuation tool, people won’t be too frustrated during surveys.

Evaluation of products and services

Another importance of using a Likert scale is that it can be a useful scale to evaluate different products and services. They do so by offering people a simple way of asking if they have an interest in or they like a particular product or service. This can be especially useful in industries wherein new products and services frequently launch from time to time along with technological changes and fluctuations.

Likert scales can also be used to gather responses from people who participated in a particular event. This can be used by marketers or event professionals to collect important information regarding the success or failure of the event that they organized. This can also be used to ask the participants to evaluate their experience, the impact that it had on the participants, and how likely they are to attend again.

What’s in a Likert Scale? Parts?

These are the main questions that the respondents will provide an answer to during the survey.

This part of a Likert scale serves as the place in which the participant will give their answer, which can be in a form of a checkbox, a shading box, or a circle. 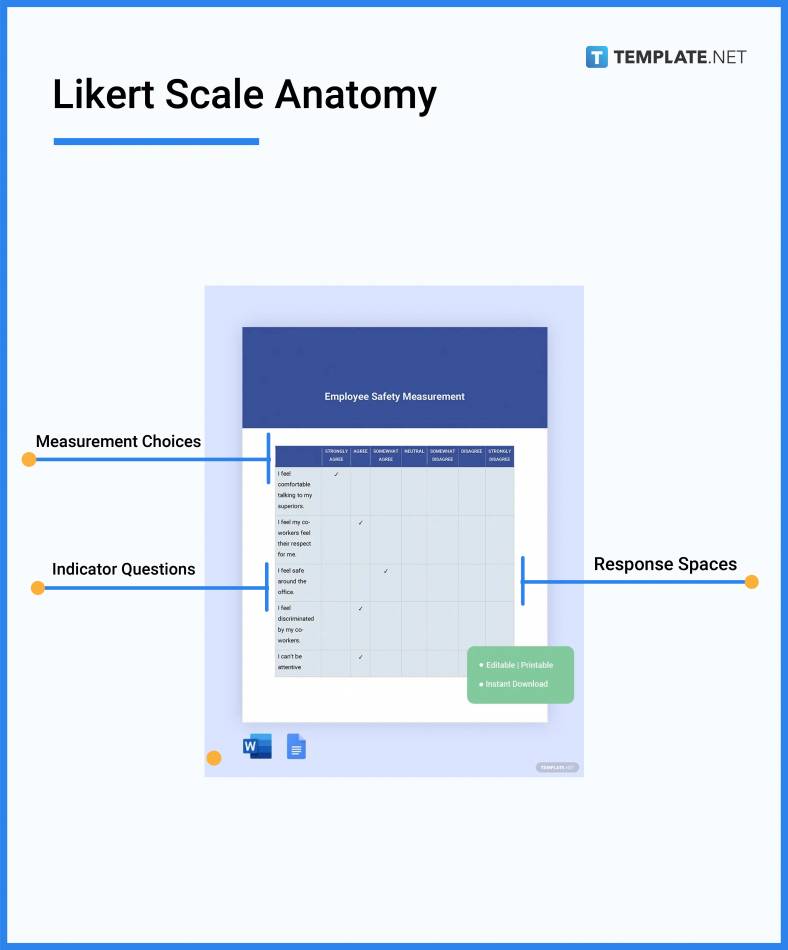 How to Design a Likert Scale?

2. Decide on the topic and the type of Likert scale to be used.

4. Modify the structure of the template to suit your topic.

5. Add any supporting graphics if necessary. 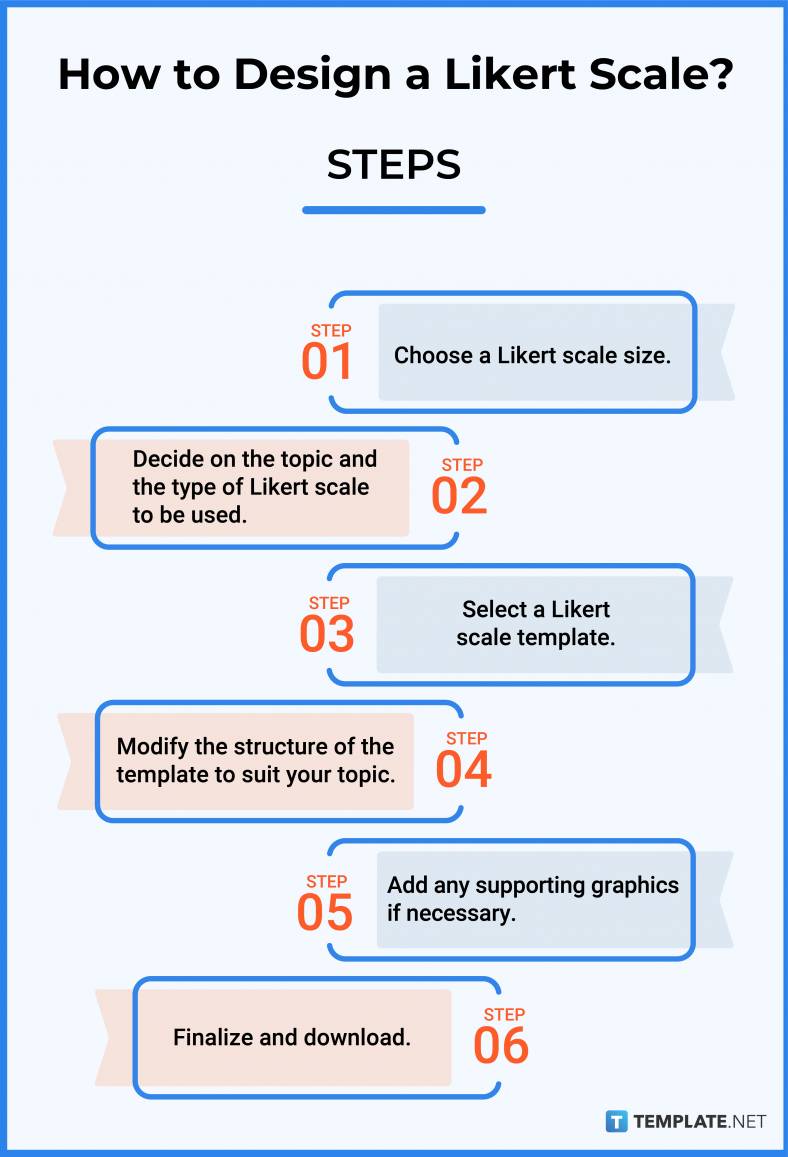 A semantic scale, or a semantic differential scale, is a type of scale that measures where the participant’s attitude or view lies to a statement on a bipolar adjective scale, which consists of antonym adjectives on both ends.

What’s the Difference Between a Likert Scale, Rating Scale, and Ordinal Scale?

A Likert Scale is a type of rating scale that exclusively focuses on a range of answers on a spectrum.

A Rating Scale consists of any number of rating choices, such as stars, faces, or numeric responses.

An Ordinal Scale is a level of measurement that reports the ranking and ordering of data without establishing any degree of variation between them.

Likert scales are most commonly used during surveys to encourage a response from the participants, and when a page that contains this scale is being created, it needs to be of the right size to ensure that the layout won’t be destroyed. Here are the most common Likert scale sizes in use.

Likert scales can be used for surveys with various topics such as product satisfaction, event feedback, or performance feedback. The following Likert scale ideas and examples can prove to be of great help should one find them difficult to make.

What is the method of the Likert Scale?

A Likert scale can be a bipolar scaling method, which either measures a positive or negative response to a statement, or it can also be a forced-choice method, in which the middle option or the neutral option is removed.

Why is the Likert scale used in research?

Likert scales are used in research since they allow the research to easily operationalize different types of personality traits or perceptions.

What type of measurement is a Likert scale?

A Likert scale is usually created with 4 to 7 points and can be treated as an interval scale, but strictly, it should be seen as an ordinal scale of measurement that does not allow arithmetic operations to be conducted.

What is the 5-point Likert scale?

A 5-point Likert scale lets the survey responders specify their level of agreement with a statement in 5 points, and is the most common type of Likert scale in use.

How do you create a Likert scale?

To properly create a Likert scale, first, determine what the scale should measure, then next, create a list of indicator statements, then decide on the response scale that should be used, and lastly, have it go through a repeated testing process.

What is the structure of a Likert scale?

The structure of a Likert scale consists of the measurement choices, which can be either 5 or 7, the indicator questions, and the spaces for a response, which can be a check box.

How is a Likert scale constructed?

A Likert scale is usually constructed by summing or averaging the responses that are used to measure a concept or phenomenon.

A Likert scale is an ordinal scale where arithmetic operations cannot be conducted.

What is the optimal Likert scale?

An optimal Likert scale usually consists of 5 to 10 scale points, with 7 being the best one to use.

What are the benefits of a Likert scale in the hospitality industry?

The benefits of using a Likert scale in the hospitality industry are that they are a universal method of collecting data, which makes it easy to understand them, and additionally, their responses can be easily quantifiable.