A company’s success doesn’t solely depend on its profit, revenue and its ability to be financially stable. There are other important factors that go beyond how much sales you can generate in a day and how many clients you can continue to attract. Financial statements won’t mean much when a company fails to assert and manage its philosophy and business ethics because each of these plays a major role in the sustainability of a business in the industry. If you’re aiming for long-term success, which we’re pretty sure you are, then it is better to set a code of ethics since it is very important in making sure that the company maintains a long-term performance.

What is ethics exactly, and why does a business need to have one as a code for its policies?

Ethics by definition is the branch of knowledge that deals with moral principles. It is concerned with what is good for an individual and for the society, ergo, the judgment and moral philosophy about what’s right and what’s wrong. For centuries, people’s general concept of ethics has been derived from early religions, philosophies, and cultures branching out from early civilizations. In business, ethics is important to make sure everybody follows a professional conduct that would help define a company’s success and culture. 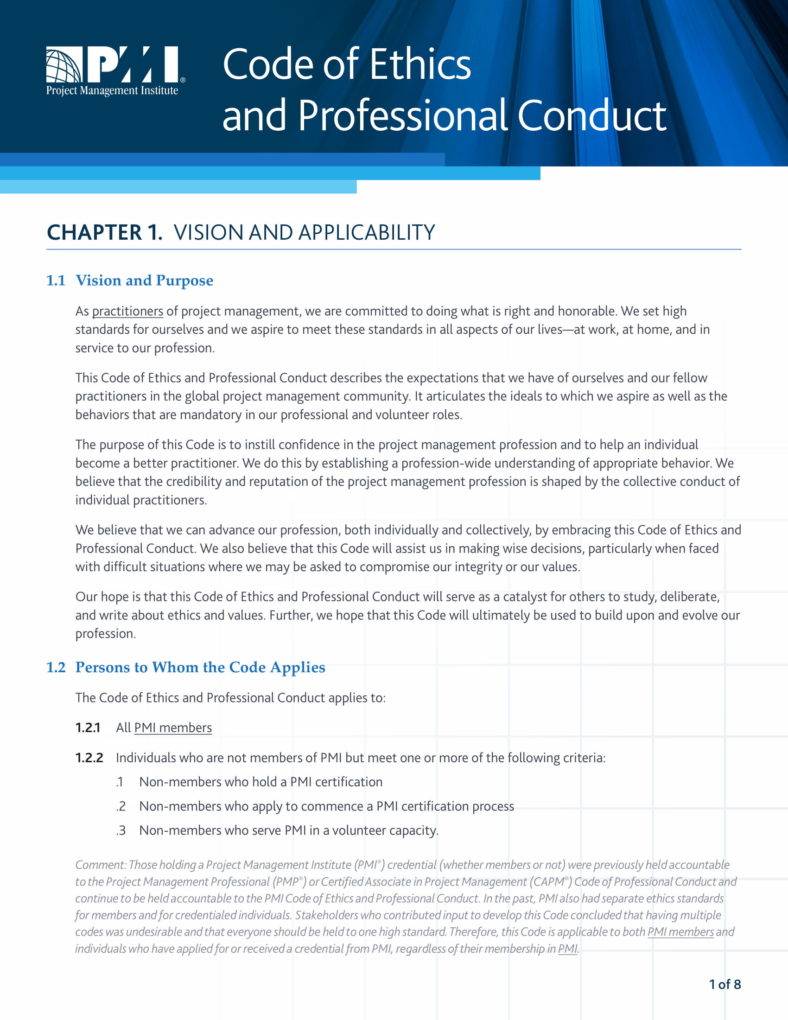 Decision-making in any organization may come from certain individuals or groups or usually, those who are in charge. But whoever makes them will always be influenced by what the company stands for. It would depend on these people’s general understanding of their company’s culture. To conduct oneself professionally is a moral decision. The manager, the employees, the members of an organization must decide for themselves whatever they think is the right thing to do, in every situation, especially decisions or actions that may have a big impact on everybody involved, including those who played no part in the decision-making process. This may involve rejecting short-term profit promises for better ones. In fact, this may involve decisions that some people may not understand but would ethically and eventually set the company on the right track. 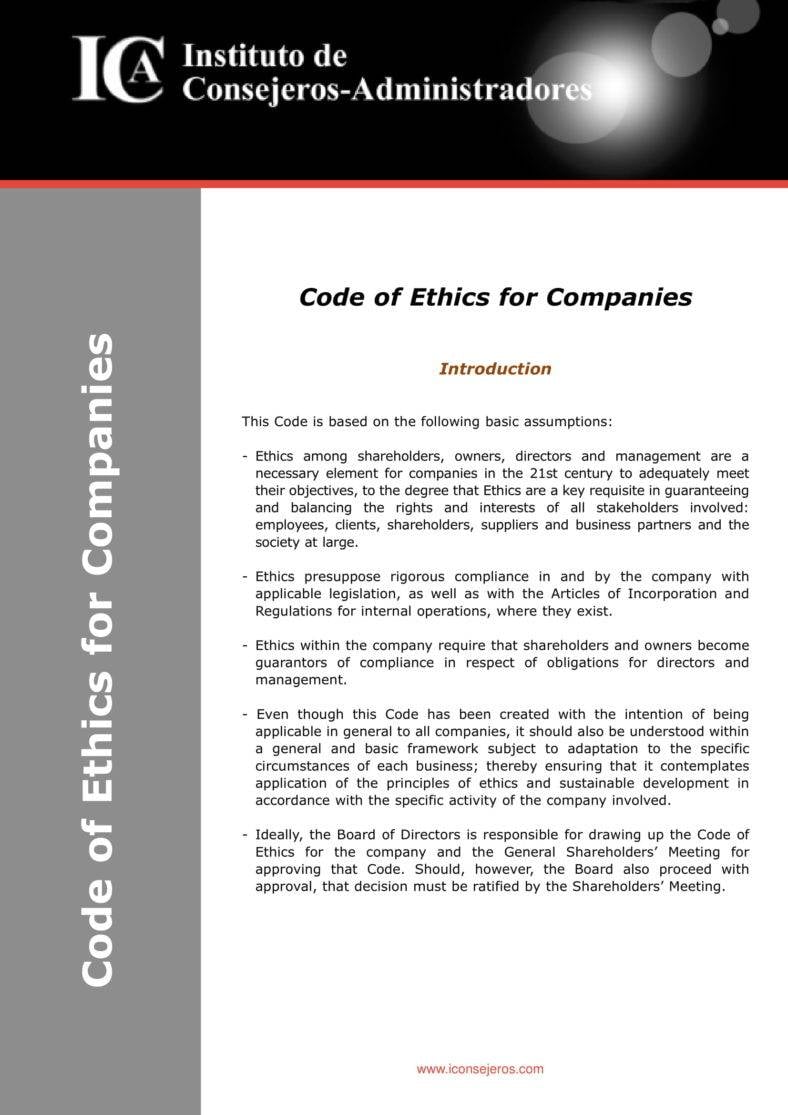 A code of ethics is an important document for any business, because if anybody breaches it, the company may land in some serious issues, disputes and all kinds of trouble with its shareholders, competitors, consumers and the authorities when worse comes to worst. Creating a code of ethics policy will guide the people in the company through long-term goals and decision-making. This way, setting ethical standards from the highest-ranking member of the organization down to the last employee will be easier. It also evokes a clearer understanding of different perspectives among members.

Having a code of ethics policy ensures that all managerial decisions are guided through a common framework and a shared understanding that makes for a stronger foundation of future decisions. It’s not always easy to take into account other people’s view of right and wrong and whether or not their moral perspectives are in line with what the company actually stands for. There are standards by which the company conducts itself when dealing with other stakeholders. 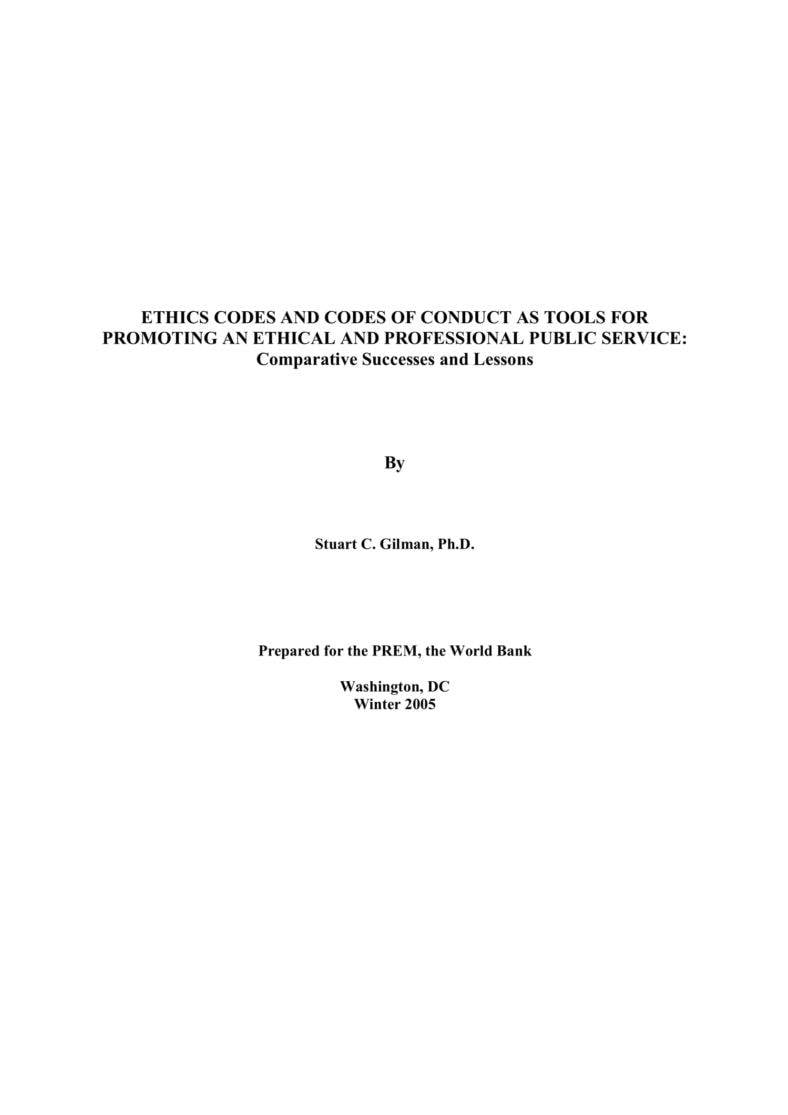 A company, no matter how small a place they hold in an industry, will do well to have a clean and commendable reputation because that is what the customers and investors would remember you for. A bad word here, an ethical error there, will find the business in an ugly proposition, one that you may never get out of. Having a code of ethics helps protect any business from any breach of ethics by an individual who doesn’t have the company’s best intentions at heart. It also sets the boundaries for dealing with other stakeholders. In this case, having a clear, formally-written and well-communicated code of ethics will safeguard the company from someone inside who decides to threaten it.
Integrity is a trait that unfortunately, not everybody can seem to go by. From the beginning, make it a point to show your employees that the company values integrity in the workplace and will operate according to its moral philosophies. This would evoke a feeling of security, knowing that people can work in an environment where they won’t be afraid or threatened of dishonesty among fellow employees and management. Aside from that, third-party groups also feel reassured by the existence of a Code of Ethics in an organization so that they tend to favor those having this policy in place.

Code of Ethics for Organizations 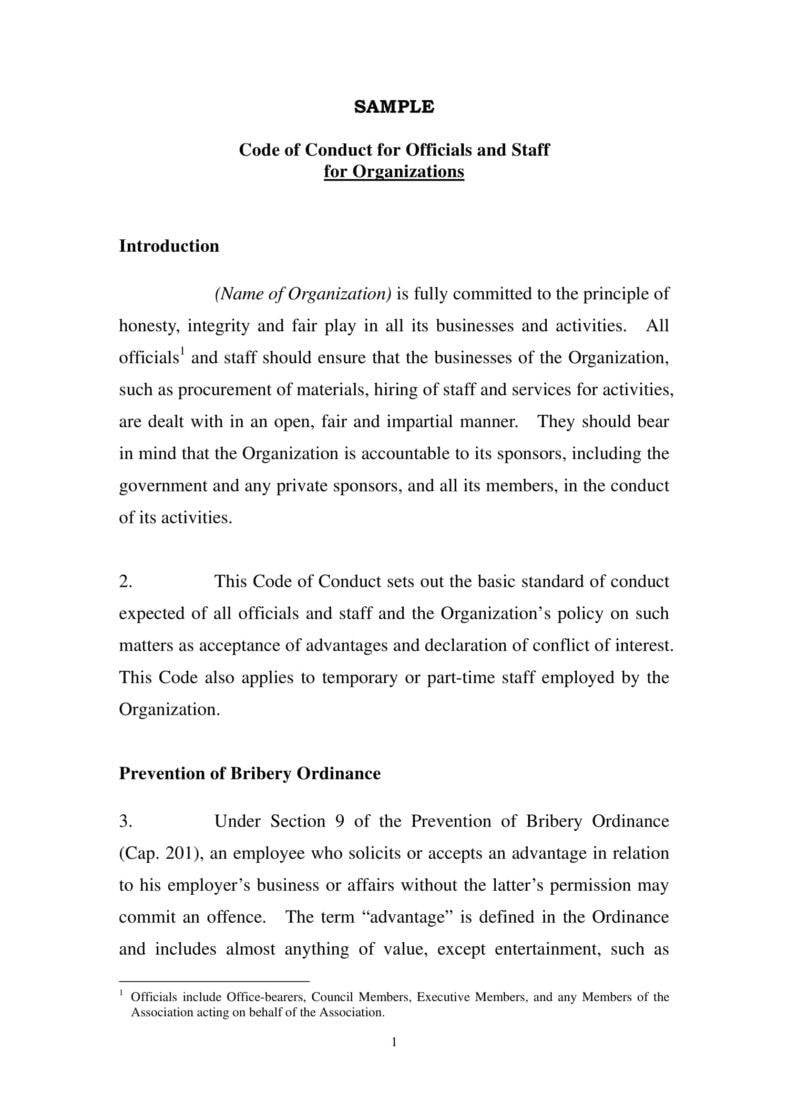 Generally, an organization’s code of ethics deals with conduct or action that, while not really illegal, can still be deemed harmful enough to the company, its clients, and everyone involved. A good code of ethics policy should have a strong statement stating the reason for its existence and the company’s purpose of having one. It should seek to address the consequences an individual, or the company would face, should anyone violate or breach it. It would be better if you include the ways in which an employee can report violations of a code, no matter how light of an offense they may seem.
When creating the code, avoid unnecessary phrases and be direct in communicating expectations. Keep it formal and write in a professional language, one that everybody will understand.  A code will be rendered useless unless it is documented, understood and followed well by the members. You should, therefore, welcome questions regarding it and its scope. Frequently talk about it in the workplace, making sure everybody is on the same page. Ask questions about the consequences of violations. Enforcing and communicating the code of ethics within the company will make it part of your company’s culture and identity. 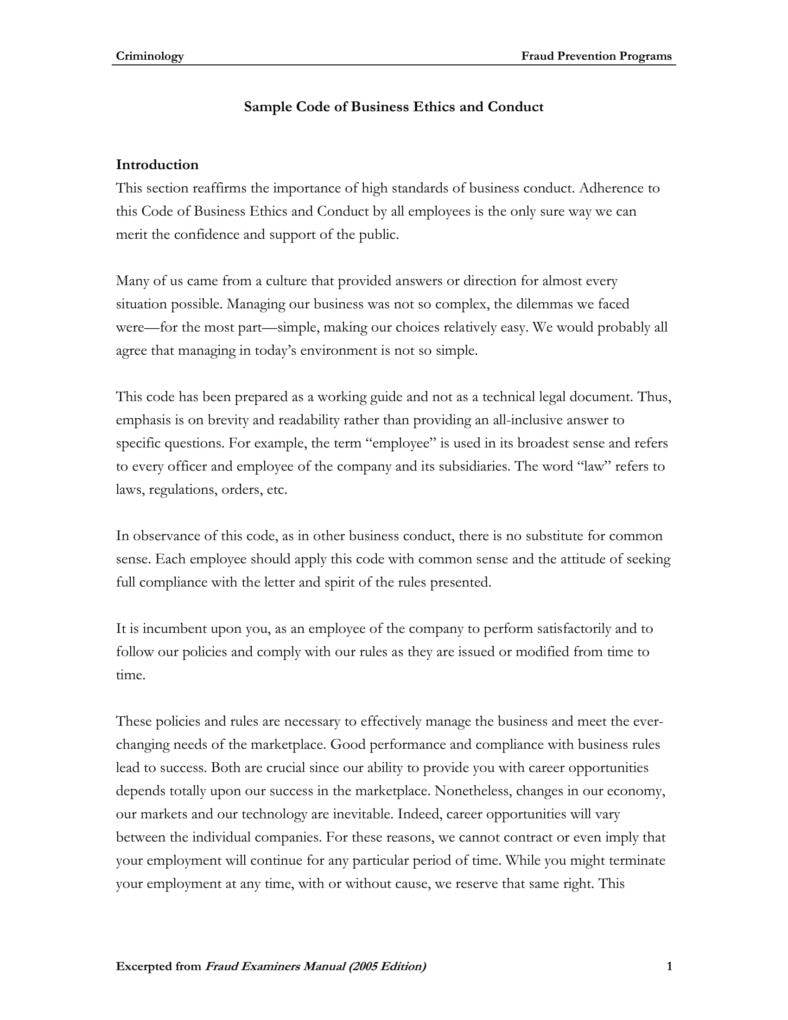 The meaning and purpose of a code of ethics may generally be the same, but not all businesses have the same policies set for it because they have different principles. It doesn’t mean one can be dishonest in one company and not be punished for it. Moral judgment is after all still about right and wrong. There is no middle ground no matter how hard you look for it.  It just means that companies have different ways of enforcing a corrective action for misconduct. A good code will, therefore, serve as a clear point of reference for dealing with wrongdoings.
Michael Connor, editor and publisher of an online magazine once said,  “A code of ethics is about corporate culture,”
Many businesses will always have a code of ethics to help set the course of the company’s long-term goals. Some may not have it in writing, but it sure is better to have it documented. Some companies even have them in fine print in every important part of their workplace, for all to see. In modern-day business dealings, companies who do not have their code of ethics written will be devoid of protection from everyday risks in their operations. 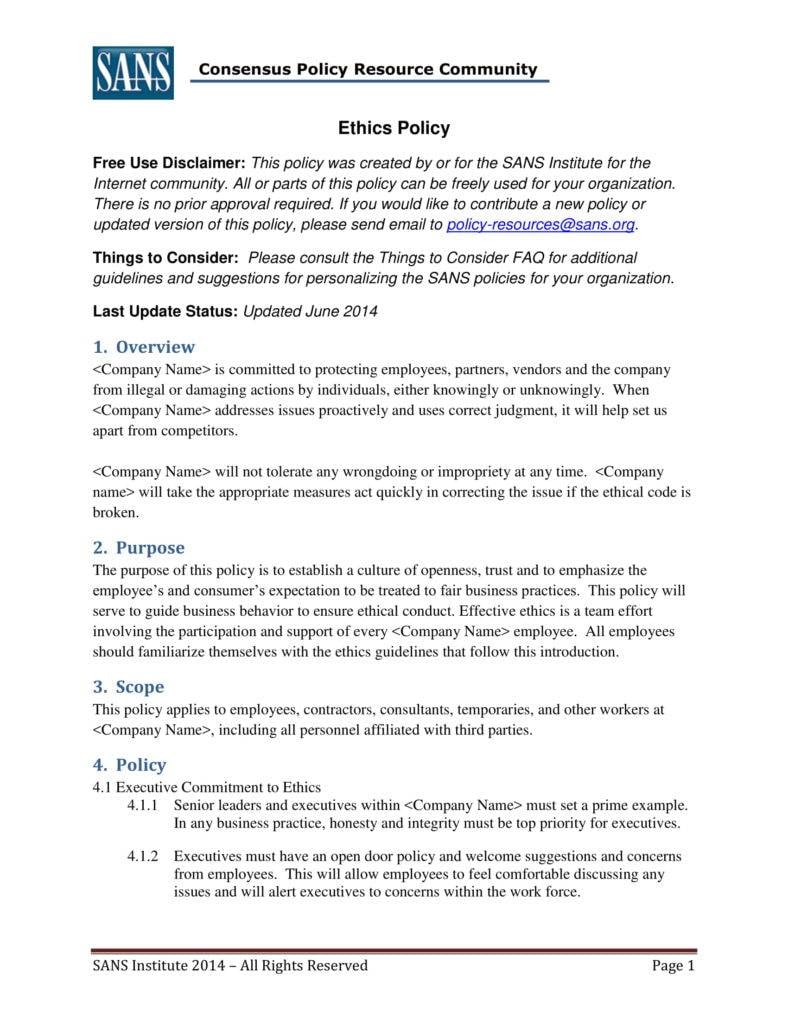 Straighten Out Your Priorities

Inside a company, there are lines that the management doesn’t want to be crossed. And then there are people who are willing to cross a line for what they think may be an important decision. What are the things that the company as a whole, would consider unethical? How much do you want to be protected and how much are you unwilling to compromise? Establishing a proper network on how people in the company are supposed to conduct themselves, would set the expectations for existing employees and help you decide what kind of people is fit to work for you or not.
In many cases, some companies have continued to hire and remove people without them ever having an understanding as to why and how they were chosen. A business looking for a long-term success and growth should build on its credibility and it is not credible to get and take away people without proper communication. This is the type of things that makes or breaks loyalty of the workforce. Don’t forget, without the workforce, there’s nobody to deal with the customers, no profit. 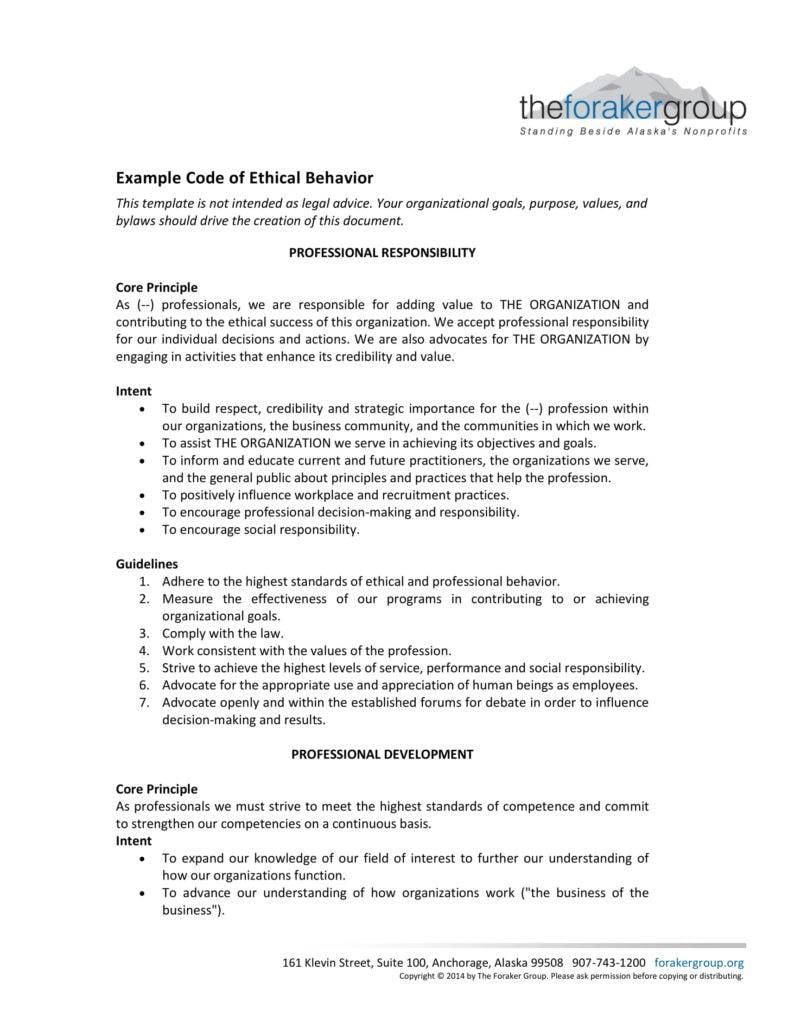 Where and How Do You Get Your Priorities?

A leader would naturally want a place away from prying eyes to brainstorm and write down his company’s code of conduct. While this is not an issue, it is still better to ask help from other members of your decision-making team, since this is not necessarily a solo activity.
In business, there are times where you are faced with decisions that test your moral code. What is morally right may not be practically what the business needs. Whether these decisions lead to mistrust, having to lose people from your team who have been with you for years, your ethical code will surely be tested, and that’s part of the job. A business world devoid of ethics would eventually make both bad and wrong decisions. It may not always be good to be morally right. But being ethical sure takes you places and gives you opportunities as far-reaching as the skyscraper outside your office window.