Struggling to write a good enough letter of agreement?  Then struggle no more, our high-quality Agreement Letter Templates are here. Why do we say so? It's because our templates are already professionally written thanks to the writing prowess of our professional business writers. They're also printable, 100% customizable, and easily editable using formats such as Google Docs, MS Word, and Pages. Moreover, they're available in A4 and US letter sizes. Thus our Agreement Letter Templates saves time on your part, enabling you to finish a good enough letter of agreement more quickly than ever expected. So go on and download them now!

How to Write An Agreement Letter? 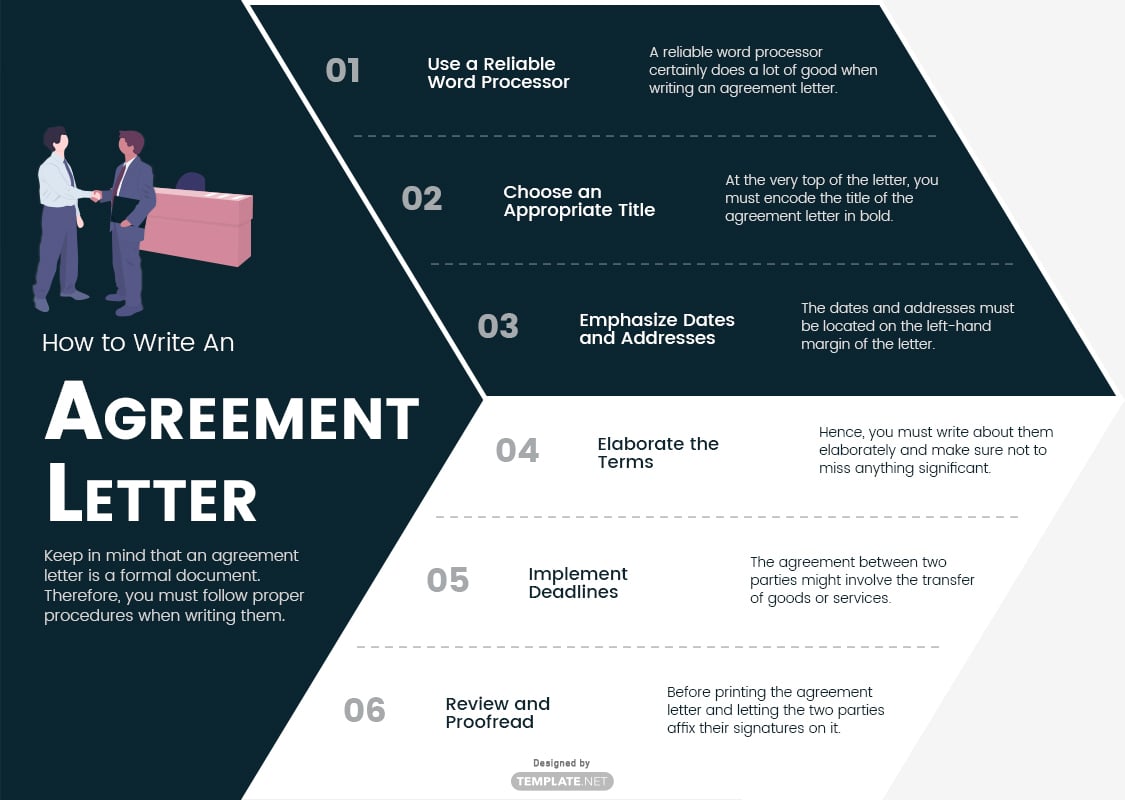 1. Use a Reliable Word Processor

A reliable word processor certainly does a lot of good when writing an agreement letter. Why? It's because they have all the right features and tools to write a formal document. Good word processors provide you with formal and readable fonts (e.g. Times New Roman) and enable you to outline your agreement letter formally.

The dates and addresses must be located on the left-hand margin of the letter. In this way, they're emphasized and will be seen clearly by the readers. Dates and addresses are an important part of any form of business letter, it indicates when and where the letter was written and signed.

This is the most important part of the agreement letter. Hence, you must write about them elaborately and make sure not to miss anything significant. This is most important if the term in concern involves large sums of tangible assets and Financial Assets.

The agreement between two parties might involve the transfer of goods or services that has to be complied with by one party. So to assure that the other party fulfills their obligation, implement a deadline to entice them to deliver as soon as possible. If the goods will be delivered by batches, make a timeline on when each batch is expected to arrive.

Before printing the agreement letter and letting the two parties affix their signatures on it, review and proofread it first. Check if there are some unintentional typos and grammar discrepancies and then correct them accordingly. And lastly, see to it that everything written on the agreement letter has relevance.