Memos are short company communications, which help spread fresh information in an efficient manner. They are usually written in order to provide dynamic and effective changes.

Memos, also known as memorandums, are defined as a common form of communication utilized within businesses.

Making use of this document enables a company or an organization to provide messages that are brief and easily understood.

What Is a Memo?

A memorandum document (also known as a memo) contains messages that are usually sent from one person or department to another within a particular company or an organization. In other words, internal conversations concerning procedures or official business are often documented in the form of a memo. Another context where a memo can be used would be in the context of law, in which it is defined as a document that records the terms of a transaction or a contract.

A memorandum in accounting, more commonly known as an accounting memo, is a short message placed in the general journal and general ledger. This memo serves as a vital communication tool that an accounting business can make use of and is usually entered into the ledger to track accounting record modifications. Even if there’s no modification in the accounting ledger, the memoranda must be documented as notes for record-keeping and management. Army correspondence is mostly official memoranda. It’s utilized to formally correspond (internally and externally) with any DoD command, staff, or activity, such as conducting programs to keep soldiers in their ranks or to attract new recruits. Army memos are usually generated by the respective secretary and are usually addressed to the commanding general. Audits can appear burdensome and irritating, yet they can enhance firms’ finances, operations, and profit margins. An audit memo refers to a type of memo that can be issued during the course of an audit for the purpose of eliciting information, confirmation of facts, or any other necessary matter during the audit phase. Companies can use external or internal auditors during the audit, and once the process is done, this document is then generated to give recommendations for any changes to improve the accuracy of the records being audited. A business memo is a document that serves as a primary way to convey information within a business. Memos are brief, direct, and user-friendly, and are usually designed to accommodate the preoccupied readers who prefer to find the information they need quickly. A business memo can have a similar role as a press release, only that its target audience is the internal personnel of a business. 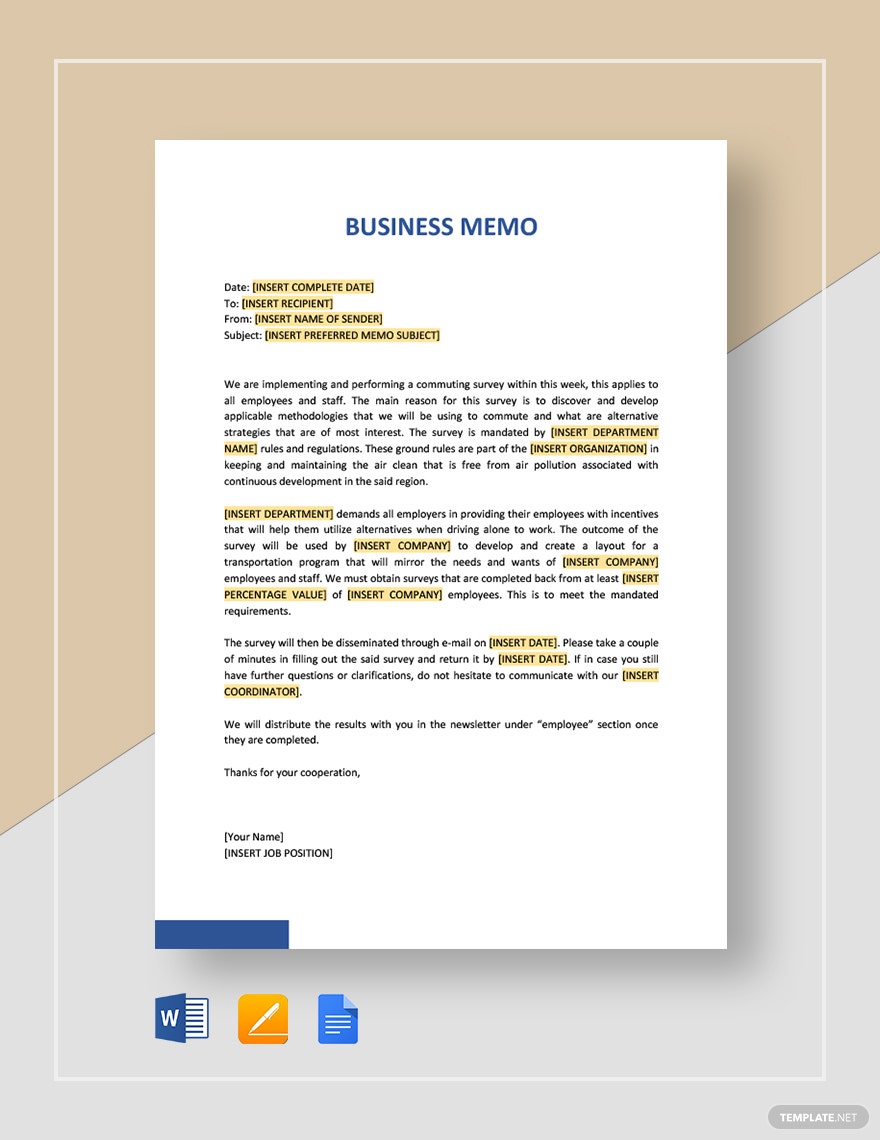 Company memos are used to relay urgent information within a company or organization. Memos can also be given to vendors or consultants with which the company has close ties. They can contain announcements regarding new rules or they can also announce impending changes within the company’s working environment. A government memo can come in different names, such as a policy issues paper, policy memos, or cabinet submission, and this document is used to transmit policy analysis to political decision-makers. Briefing notes, which can also be a form of a government memo, are usually marked “for information” or “for decision.” Overall, this type of memo can help decision-makers make better decisions. In law, a memorandum is a record of a transaction or contract, such as a policy memo, MOU, MOA (memorandum of agreement), or MOA (memorandum of association). Legal memos are used for internal company communication, while letters are for external. In other situations, this type of memo can outline the legal issues in a case and the lawyer’s respective assessment of that situation. Office memos are the official means of internal communication in any size company. This type of memo can be distributed to individuals or the entire department about upcoming events and meetings. Using department-specific memo templates can be an advantage since it saves time by avoiding unnecessary meetings. A project memo is an internal document intended to update stakeholders on progress, policy changes, or compliance measures. This type of memo can be handwritten or sent to staff, and can also be used to address to the target audience the various stages of a project or to present data that is related to a project. When creating this document, keep in mind that memos should follow a certain corporate format. A school memo (also known as a school memorandum) helps communicate efficiently with school departments, organizations, and people. This can be addressed to the parents of the students, the faculty, the staff, or the students within a private or public school. They should be simple and easy to read, which is a key factor in efficiently communicating the message to its intended audience. Memos can be used to swiftly communicate something brief but significant, such as procedural modifications, pricing increases, policy updates, meeting schedules, team reminders, or agreement conditions. A memo draws attention to a task, project, event, or problem that can affect business or personal life. Memorandums communicate new information with communities and businesses. Here are its uses and importance to users.

A memo informs employees of essential company details. A memo communicates both directly and indirectly through tone and structure. Memo writers retain professionalism by employing a formal tone, yet an informal tone may be suitable for a message about the company picnic.

An advantage for businesses

Businesses might use memos to update policy, adjust practice, or convince staff to act. Attend a meeting, convention, or milestone celebration. A memo’s structure must be simple so receivers can scan the message quickly.

Management may issue a memo to address a situation. A memo like this may describe the problem’s seriousness and any investigative findings. Memos may address employee tardiness or absence, customer dissatisfaction, badly implemented procedures, or workplace etiquette issues like cell phone use during meetings.

Memos are often used to comment on company programs, services, or products. These memos provide staff feedback on their job. HR may utilize a message to share survey results with staff.

What Is a Memo? Parts?

Heading Components of a Memo

A memo’s heading must include sender, recipient, date, and subject.

Another element that makes up a memorandum is called the context section, and its purpose is to provide some history regarding the material that is being delivered.

The reader will now have a notion of the next steps you are taking as a result of reading the memo.

If you need to provide statistical information, data, or facts gleaned from market research, supply these particulars in a new paragraph.

Finish off your memo with a succinct conclusion that explains what you are hoping the reader will take away from the experience of reading it.

Documents and Other Attachments

Attach any relevant graphs, charts, policies, reports, minutes, or other business documents at the back of the memo if you make reference to them inside the message.

How to Design a Memo?

2. Decide on the purpose of the memo document.

5. Make sure to include the date.

6. Designate who receives the memo with “To”.

A memo is a short formal note given from one employee to another.

What’s the Difference Between Memo, Letter, and Cover Letter?

A memo is an official note intended to inform, direct, or advise organization members.

A letter is a company’s brief message to an outsider.

A cover letter is a document provided with a job application that describes the applicant’s qualifications and interest in the employment.

Memos come in a variety of sizes and can be utilized in many different ways. Listed below are the most common memo sizes that were utilized in the process of producing this document:

Different types of institutions make use of a variety of memorandum forms, each of which calls for a specific design, layout, or image to be used in accordance with its intended function. If you are going to be writing a memo paper, then the various memo ideas and examples that are provided here can be of great use to you.

How to write a business memo?

The subject line should tell the reader what to expect from the memo and where to save it in their email folders and don’t forget to express your gratitude for their hard work and your plan to help them through recurring changes.

What is the format of a memo?

Keep in mind that you need to skip a line between phrases in order to mark new paragraphs and that memos are typically one or two pages long, single-spaced, and left-justified.

What is a good way to start a memo?

The memo’s purpose should be quick, concise, and to the point so you may convey the most important information first and go into more depth later.

What is a letter of memo?

Since you may know the recipients, a memo may seem less formal than a business letter, but it’s not.

What is a memorandum of understanding?

A memorandum of understanding (MOU) indicates each party’s intentions to act, undertake a business transaction, or form a new partnership.

What are the four main headings of a memo?

Your memorandum ought to include the following sections: a heading, an introduction, the body, and a conclusion.

What is the memo used for in a workplace?

Memos are a useful tool for keeping staff up to date on the most recent activities taking place inside the firm or within a particular department.

How do you write a school memo?

You need to make sure that whatever memo you write, whether it’s for a teacher, a student, the staff at the school, or anyone else, it’s written in a formal manner and has an explanation of what the message is about.

What makes a good memo?

Memos are brief, direct, easy to navigate, less formal than letters, and should identify a problem and provide a remedy.

How to write a memo for effective business communication?

The key to effectively communicating your thoughts or message in a business memo is to do it in a manner that is as unambiguous and succinct as possible.

What could be the best thing to do after using the tips in writing a memo?

After you have utilized these pointers on how to write a business memo and have crafted your message, the next best thing to do is to have a professional proofread and edit your memo to ensure that your memo appears and sounds exactly how you want it to before you distribute it to the entire office.

Why is it important to use the appropriate tone?

Memos should be assertive and straightforward that is why you need to take into account both the content of your memo and your intended audience before selecting the tone that will most effectively communicate your message.

How long should a memo be?

Less is more when writing a memo; therefore, if it runs over one page, use headings to make it easier to read.

Where can we find the purpose of the memo?

The objective of a memo is typically stated in the first paragraph, and this paragraph will typically comprise the following sections, which are the context and situation, the specific assignment or task, and the purpose of the memo.

What is the most important part of a memo?

A task statement is an important component of a memo wherein you could outline the actions you are taking to contribute to the solution of the problem.