Damage reports are a cumbersome document to create from scratch. But that shouldn't trouble you if you make use of our high quality Damage Report Templates. Why so? It's because they're already professionally written courtesy of our professional business writers. Our templates are printable, 100% customizable, and easily editable with formats such as MS Word, Google Docs, and Apple Pages. Plus they're available in A4 and US sizes. Ultimately, our templates significantly saves time on your behalf, enabling you to create damage reports a lot more quickly than usual, and allowing you to proceed to other tasks. Download them now and experience their convenience!

What Is a Damage Report

A damage report (sometimes called damage assessment report) is a formal written record of the damages incurred by an unfortunate incident. The purpose of a damage report is to assess the magnitude of the damage, which would then serve as a guide to find some ways to compensate the negative aftermath incurred by an incident. One of the ways to compensate damages is with an existing insurance. The victims of these damages could be a vehicle, an equipment, a real estate property, an infrastructure, an appliance, a house, and any other property damage.

How to Create a Damage Report 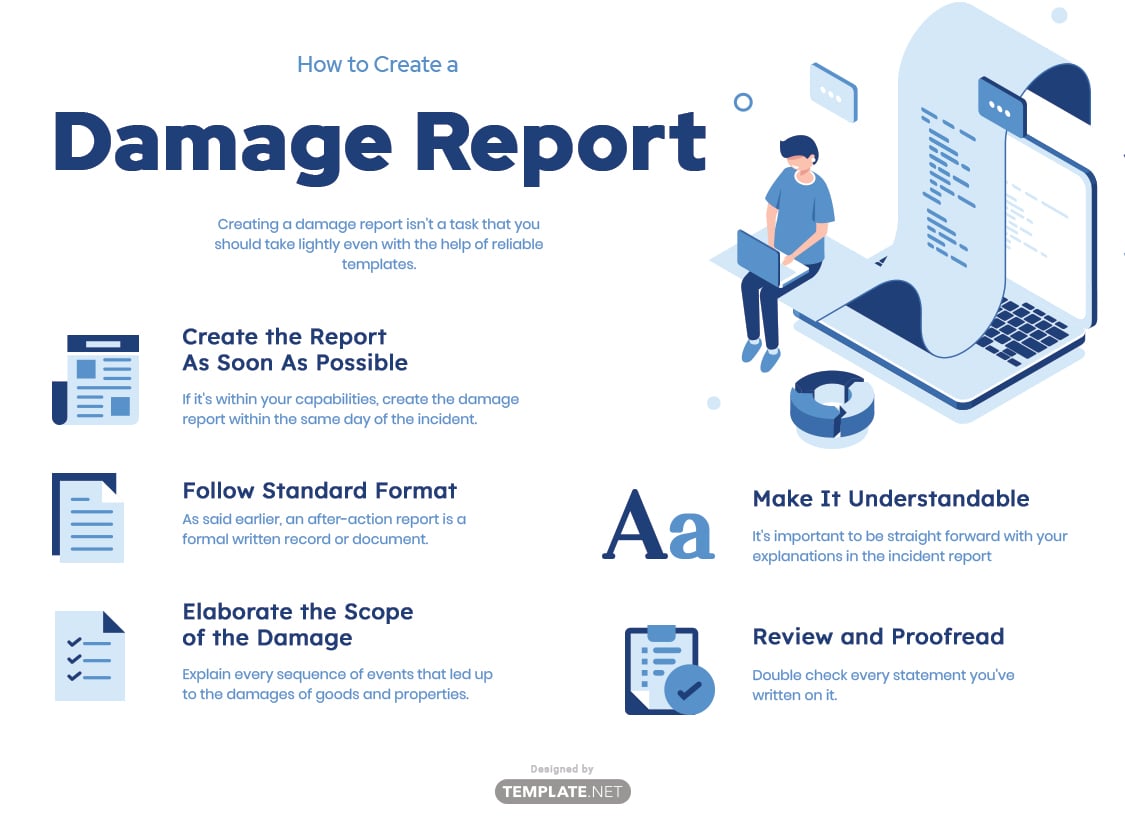 1. Create the Report As Soon As Possible

If it's within your capabilities, create the damage report within the same day of the incident. Sample reports that are created the day after or days after can eventually cause major problems. Questions of suspicions might then be raised by other entities. It's likely they will question the credibility and authenticity of the damage report. The claims you've written on it could also be deemed insufficient and unreliable when further investigations begin.

As said earlier, an after-action report is a formal written record or document. Therefore, it's fitting to create it following a standard format. However, it's much better to make use of damage report templates to save yourself the hassle of formatting them accordingly.

3. Elaborate the Scope of the Damage

This is the most important heads-up that you should always remember when creating a company report. As much as possible, explain every sequence of events that led up to the damages of goods and properties. If you do this in an elaborate manner, then it should significantly help during the investigations. You can also attach photos or show video footage showcasing the aftermath caused by an incident.

It's important to be straight forward with your explanations in the incident report. Don't use flowery sentences and phrases that could cloud the information you're trying to convey. Other variables in the damage report that aren't connected with the incident and the damages are immediately deemed irrelevant.

Once you've finished creating the damage report, take some time to review and proofread it from start to finish. Double check every statement you've written on it. There might be some grammar and punctuation discrepancies that could confuse the readers. Lastly, make sure that your explanations are true and reliable.