Record Proceedings of Your Meetings Efficiently with Template.nets Free Meeting Minutes Templates. Download Samples for School or Business Meetings, Whether Formal or Informal and Disseminated for Office Staff or for Sending through Email. Download and Easily Fill the Spaces with Agenda for Projects Like Construction and Other Relevant Projects!

Meeting minutes, as difficult and tiresome as they sound, are very important documents for the well-being of the company. Briefly describing, they are the summary of a meeting in words. This includes the name of people present, the strategies discussed, the motions-for and against and the pertinent decisions are taken.  One needs to make sure that the minutes comprise every single detail and that too accurately. Recording and registering is the most difficult part of making minutes. But, why worry while we are still there. Fortunately, our printable Meeting Minutes Templates make a great tool for writing formal meeting minutes, whether it's for a staff meeting, committee meeting, board meeting, or more. They are available in different formats like MS Word, Pages, Google Docs, and PDF. Get more of these templates prepared with specific provisions and take advantage of our premium-quality service to pose as an absolute professional!

How to Write Formal Meeting Minutes? 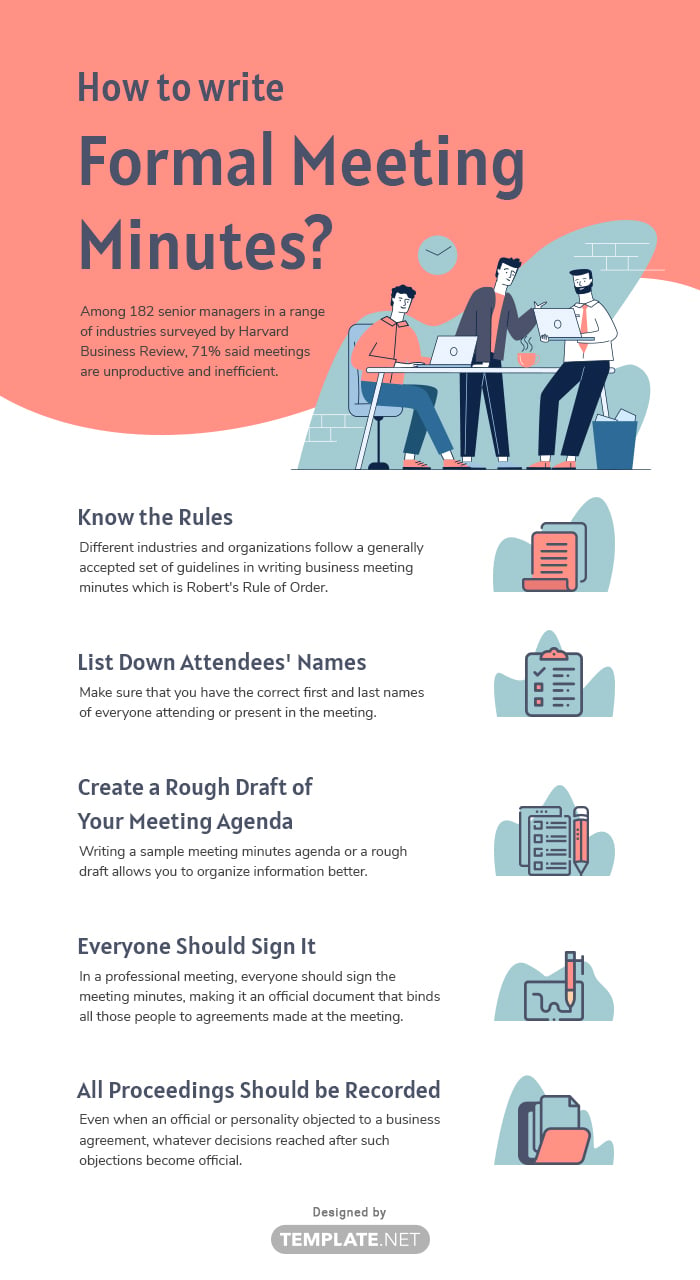 The minutes of a meeting record in writing the proceedings of such meetings. Meeting minutes are very important in the documentation of key points discussed which led to a decision, especially if such decisions required voting on the participants' or attendees' part. Effective meeting reports or meeting minutes are fairly simple to write but they also shouldn't leave out critical information.

Among 182 senior managers in a range of industries surveyed by Harvard Business Review, 71% said meetings are unproductive and inefficient. One way of changing your approach to make your regular or monthly meetings productive and effective is by creating and using meeting minutes.

In official or formal gatherings such as Senate and Congress sessions, everything that is said by everyone is recorded so that no one can claim otherwise. Whether it's for a formal or fairly informal meeting, you should be able to create weekly meeting minutes for your business that document the session accurately. Here's how.

Different industries and organizations follow a generally accepted set of guidelines in writing business meeting minutes which is Robert's Rule of Order. Ask whether your group follows the same if you're the secretary, since most of the time, it's the secretary that writes the minutes. If you're following any other basic corporate meeting minutes guide, it's still important for you to be familiar with the general formatting rules. You also have to know your role beforehand because it might be limited to documenting which means you may not be able to participate in the meeting itself.

Make sure that you have the correct first and last names of everyone attending or present in the meeting. If you're not sure, ask your boss or the person who presides it. Most of the time, a meeting cannot take place without the presence of a particular person or individual. You can also prepare a meeting attendance sheet that the attendees can just fill in.

3. Create a Rough Draft of Your Meeting Agenda

Writing a sample meeting minutes agenda or a rough draft allows you to organize information better. Have a separate section for the agenda as well as the time and date of the meeting. Include a space for writing down motions with their corresponding ruling because it is crucial to have a written record every time something is decided by officials or organization board.

In a professional meeting, everyone should sign the meeting minutes, making it an official document that binds all those people to agreements made at the meeting, policies formulated and all such other things discussed. In no way can an official or member back down from the agreements or decisions as therein lies what they had agreed upon.

5. All Proceedings Should be Recorded

Even when an official or personality objected to a business agreement, whatever decisions reached after such objections become official. That is why all the proceedings in a meeting should be recorded, and it is precisely why it is called a meeting minutes. It is an official document which, in many cases, can withstand court scrutiny.