Software developers churn out thousands and thousands of code every day. Not only do they write code to develop new apps, they also do it to update older ones. Apps, and in a larger scale software, need to be refined and updated to remain useful and relevant. Every day, people would think of better ways to make themselves convenient. For humanity, progress is the name of the game. Not all software updates give birth to positive results, however. Some people dislike change. Sometimes an app dies from just a facelift even if this facelift is as simple as moving a button originally found on the left to the right. You may also see sample budget report templates. 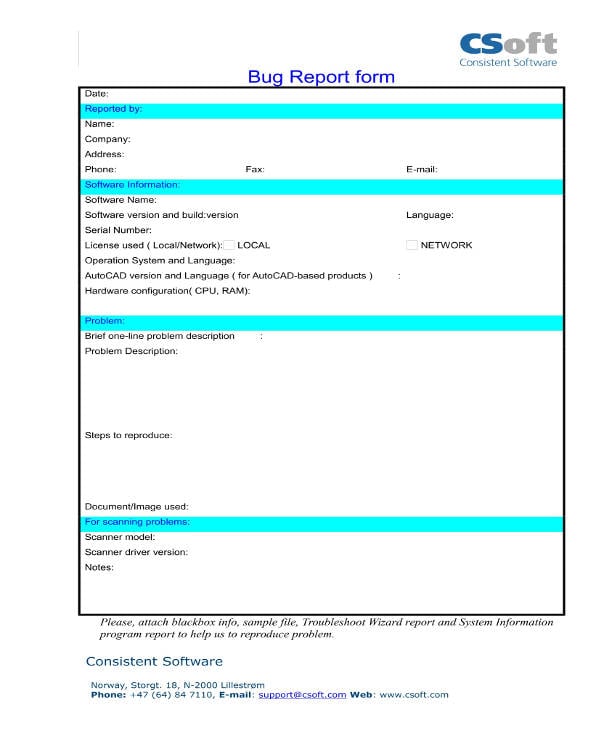 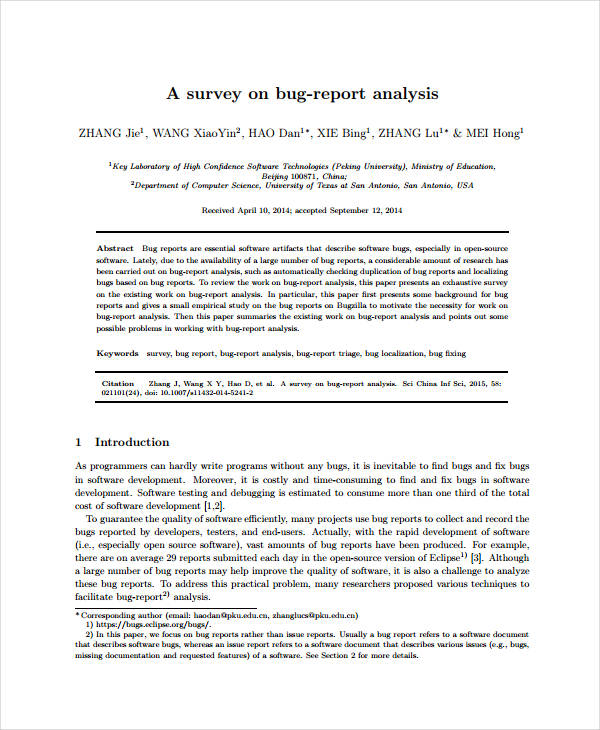 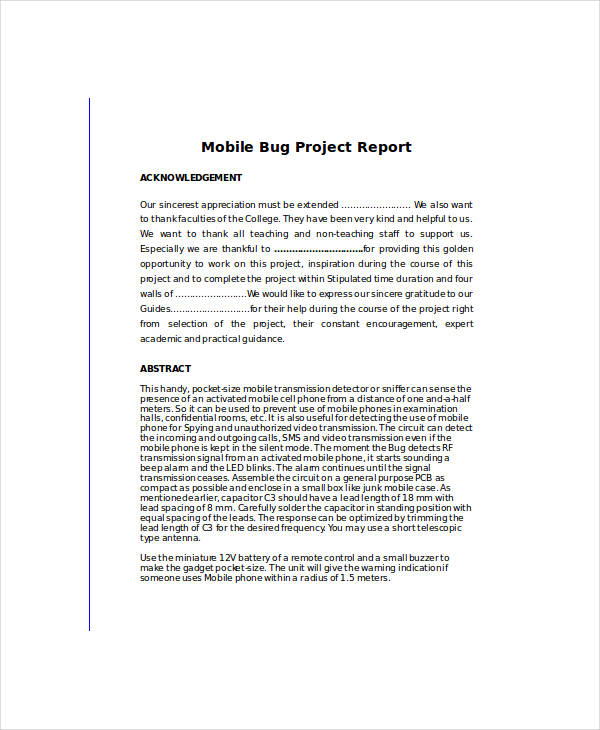 Another one of these rough patches in software development would be the bugs. The term “bug” (which originated from a computer problem caused by an actual moth, a real “computer bug”) is defined by Wikipedia as a failure, flaw, error, in the computer system or program that causes it to produce an unexpected or incorrect result or results in unintended behaving ways. Software debugging is the term used for the process of correcting these bugs. Software debugging can take a long time and as such, bug reports are vital to this process. You may also see contact report templates.

A bug report is just that, a document created to report the existence of bugs. Software testers are the people whose main job is to find and test the bugs. It is their primary job to test a software to the limits of its capabilities and report their findings to the developers. Software testing can even take more time and resources than developing the program, as such, it is vital for testers to write a good bug report. You may also see IT report templates.

Elements of a Good Bug Report

A bug should have a unique number assigned to it. Having a specific number for each detected bug could make for an easier way to track it. This number could be considered as the bug’s ID. This could be automatically generated when a tester is using an automatic bug reporting software. You may also see sample action report templates.

A bug must be reproducible for it to be considered a bug. Reproducing a bug ensures that the bug was from a system error and not just unique to one person. This also proves that the bug does exist and not just a random report. You may also see performance report templates.

In order to avoid wasting more time, a bug must be described properly. There is no need to write a long essay. A quick description of the bug to help the developer visualize the problem is enough. It is also a good practice to write your expectations on executing a certain command to ensure whether the bug is indeed a bug or the program is working just as intended. Note that it is also good practice to write just one problem per report and do not combine them in a single report. You may also see feedback report templates. 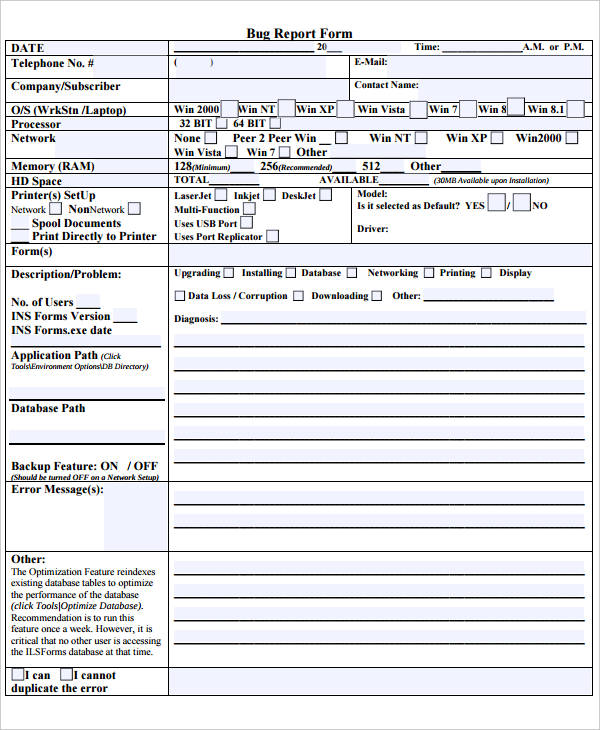 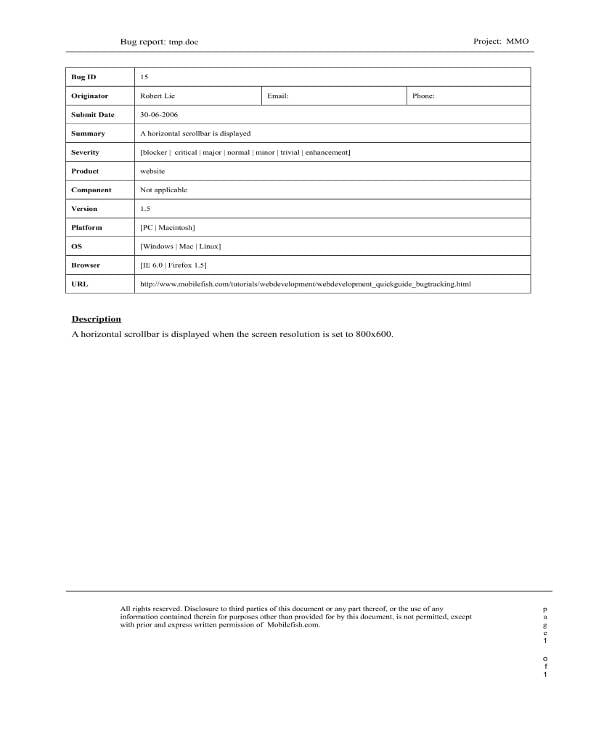 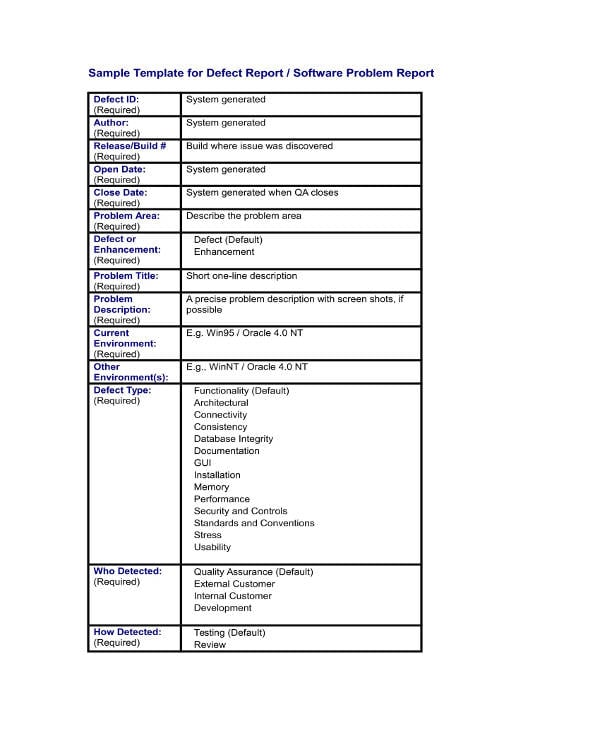 Before Writing a Good Bug Report

The first step in writing a bug report is to isolate it. This means that you should try to reproduce the bug. Remember that a bug must be reproducible for it to be considered a bug. To correctly identify the problem, retrace every step that you have done and in always be specific. Being explicit is key. Try to write your report in a step-by-step process so that it would be easier for the developer to replicate said bug. You may also see monthly report templates.

3. Check if the Bug is Known

This is what the specific bug numbers are for. Having duplicate bugs can be confusing and frustrating. Avoid adding burden to the testing cycle by checking if the bug has already been identified. Create a new issue if it is not. You may also see executive report templates. 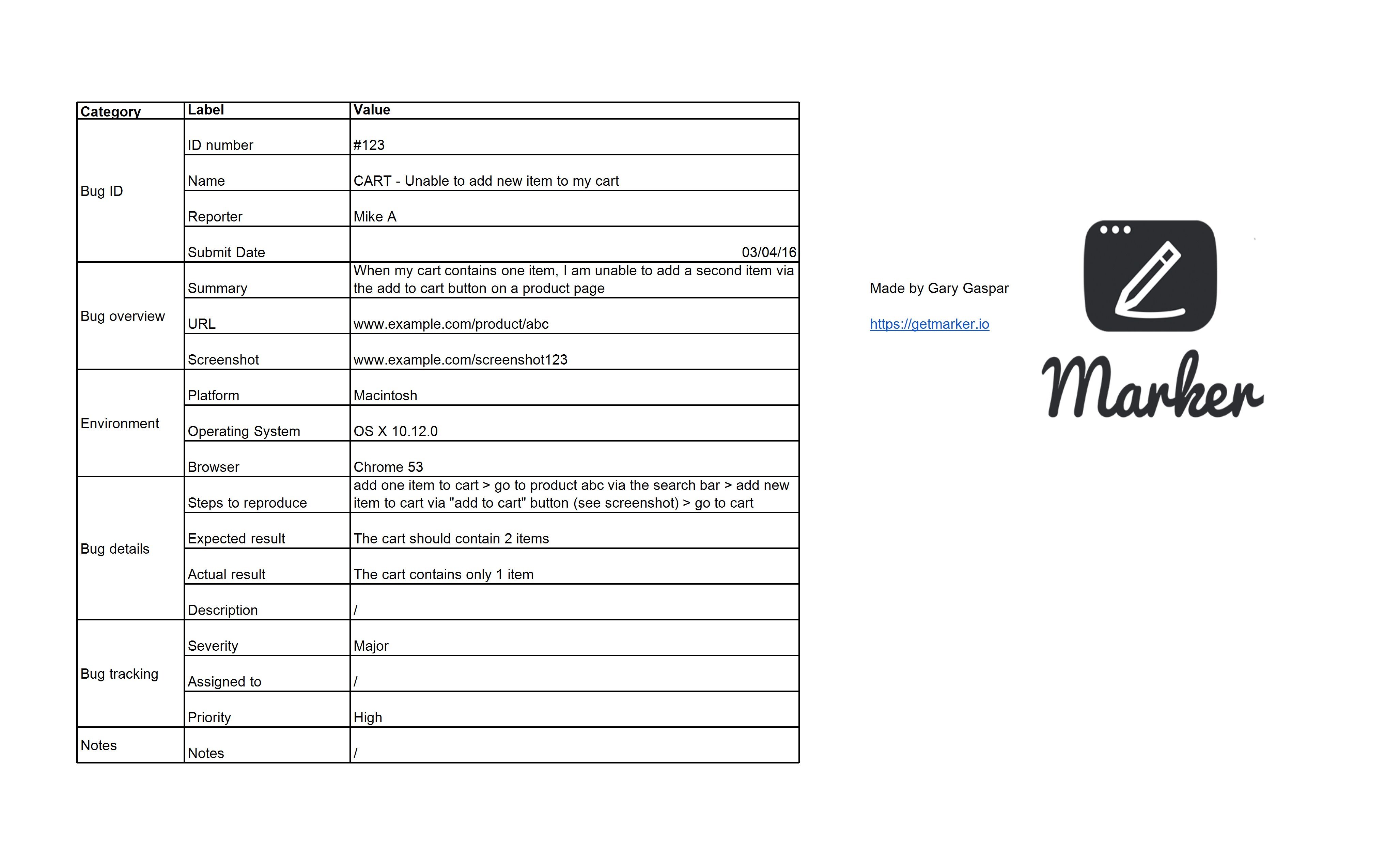 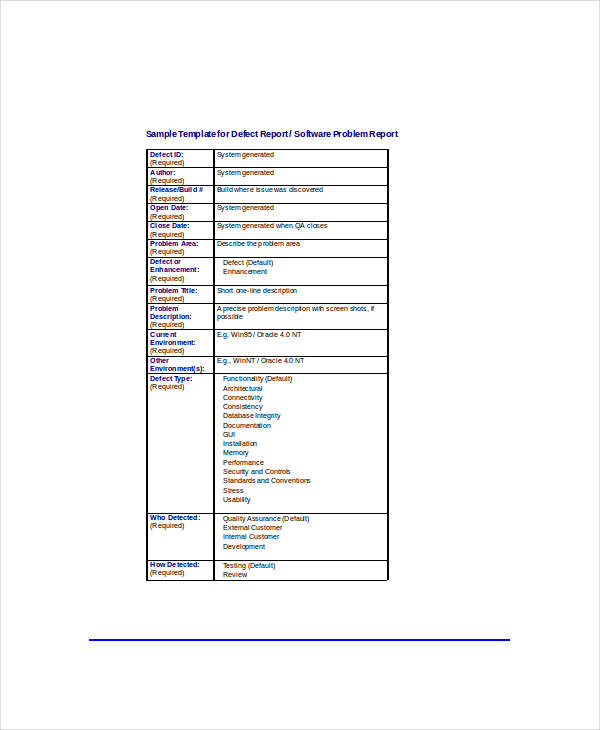 What to Include on Your Bug Report

Indicate what went wrong here. As stated above, keep it brief but detailed.

2. Steps to replicate it

Indicate how you broke the program here. Write it in a step-by-step process. Always be specific. Indicate things like whether you used a keyboard to submit a form or used the button instead. These things might seem inconsequential but they are vital to the replication process. As much as possible recreate the environment when you found the bug. You may also see status report templates.

Indicate what you think should happen here. This is essential to the bug report as this will tell the developers if one is just not misunderstanding the function of the program. Some bugs are obvious while others are not. Indicating what you expected to happen can be a great help to developers in finding the problem or if there is any problem at all. You may also see evaluation report templates.

A picture speaks a thousand words. Including pictures in your bug report can help highlight the bugs you found.

What is Found on Your Bug Report

A simple format for a good bug report should at least include the following: 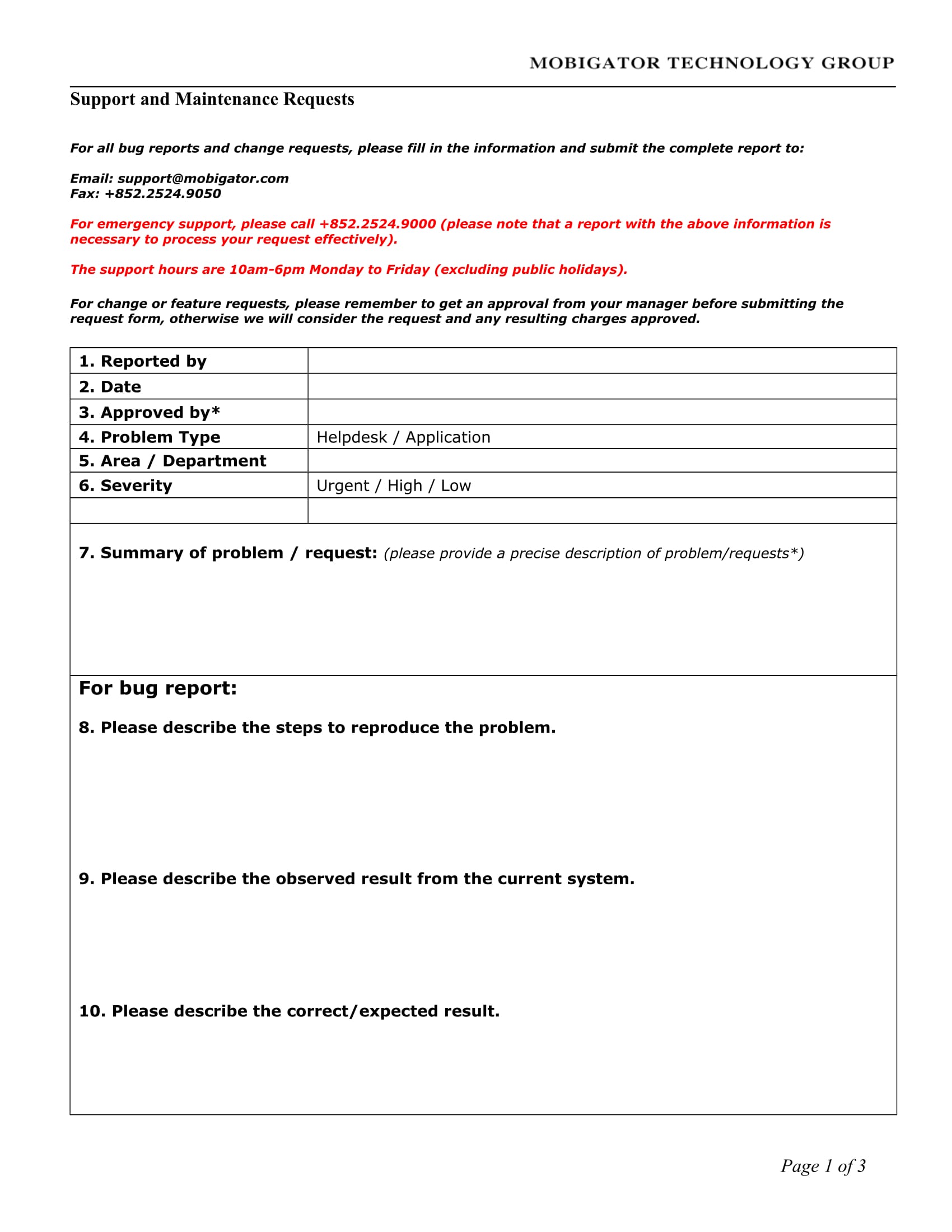 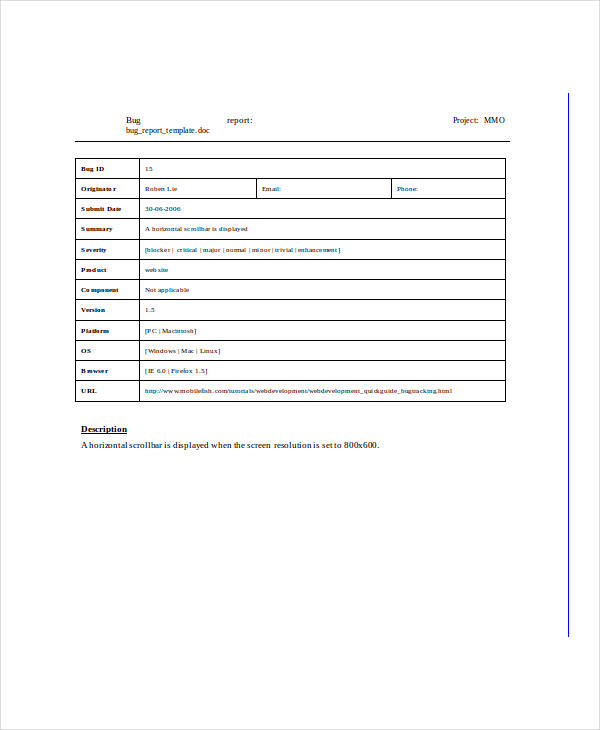 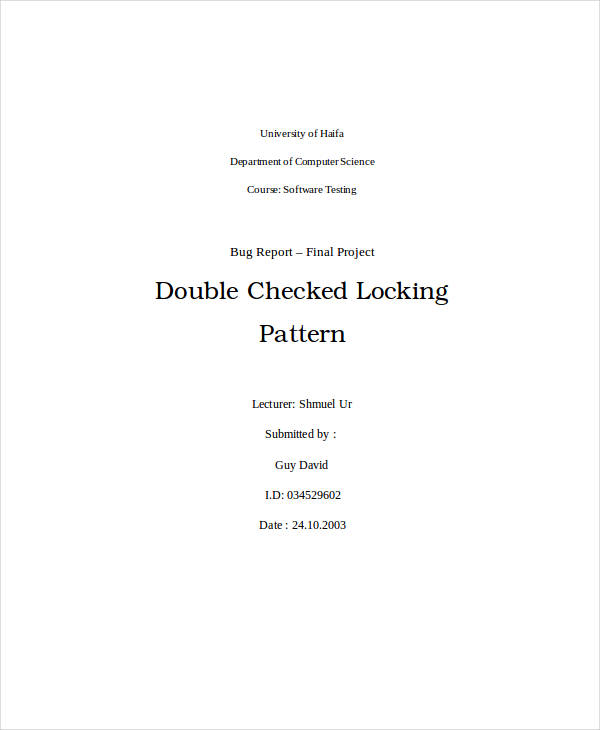 Bug severity describes the impact of the bug. It can also dictate the priorities of when should the bug be fixed. Indicated below are the common types of bug severity. This may vary depending on your project, organization, or company. You may also see access report templates.

All in all, creating a good bug report is vital to the software development process. As it is a document that serves as the line of communication between the tester and the developer, it is essential to create one that is clear and direct to the point. A good bug report may very well be the key to a fast remedy to your software problems. You may also see report template samples.