Electronegativity is all about how you measure the tendency of an atom to attract electrons. Sometimes it could be a functional group that attracts a bonding pair of electrons. With an Electronegativity Chart Templates, it is easy to have a chart with Table of Contents (ToC) with electronegativity values of the various elements one below the other on the periodic table. 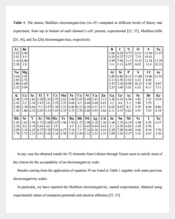 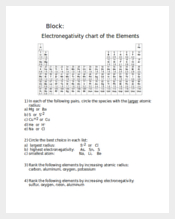 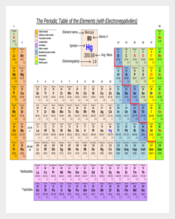 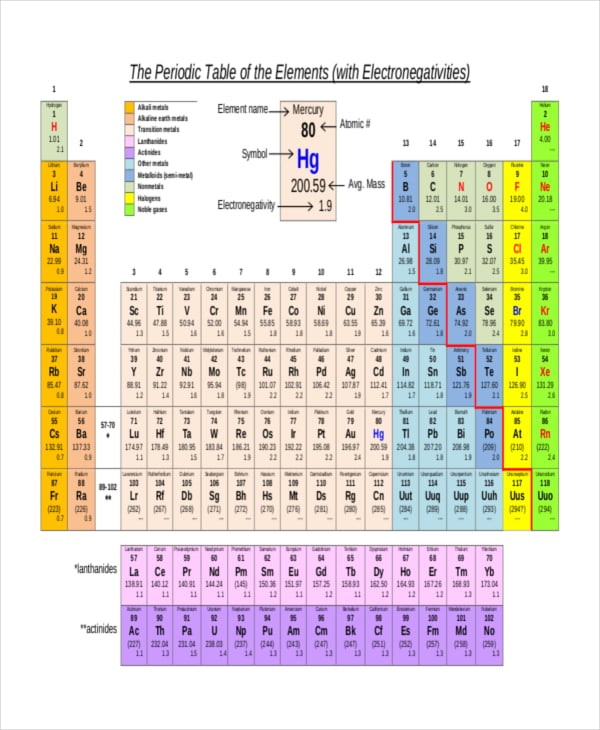 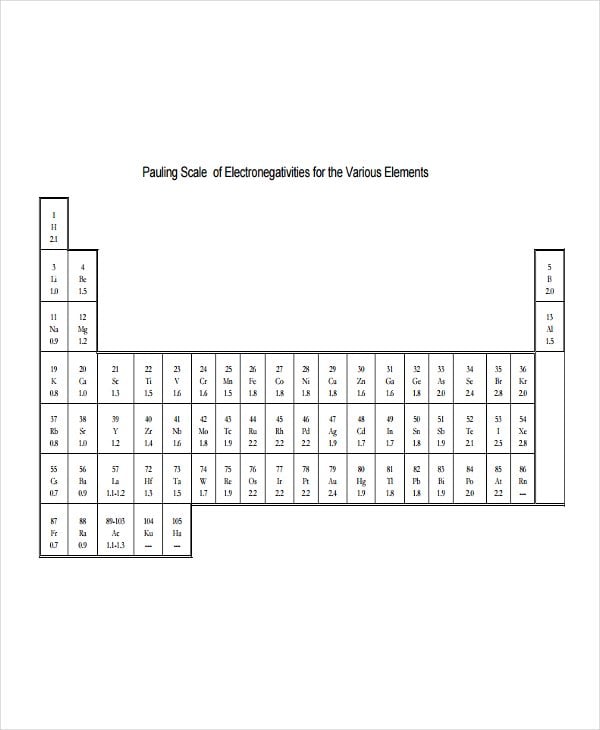 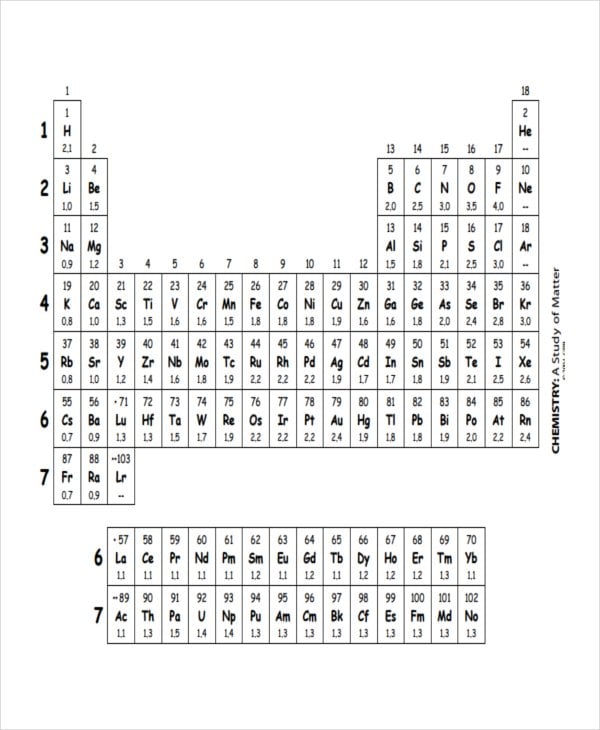 The Chemistry Electronegativity Chart Templates list out Chemical elements of the periodic table which are listed by electronegativity without any accidental mistakes. The chart consists of 118 elements of chemistry that starts with Actinium and ends with Fluorine. Furthermore, they even provide you health effects, environmental data, and chemical properties of each element. 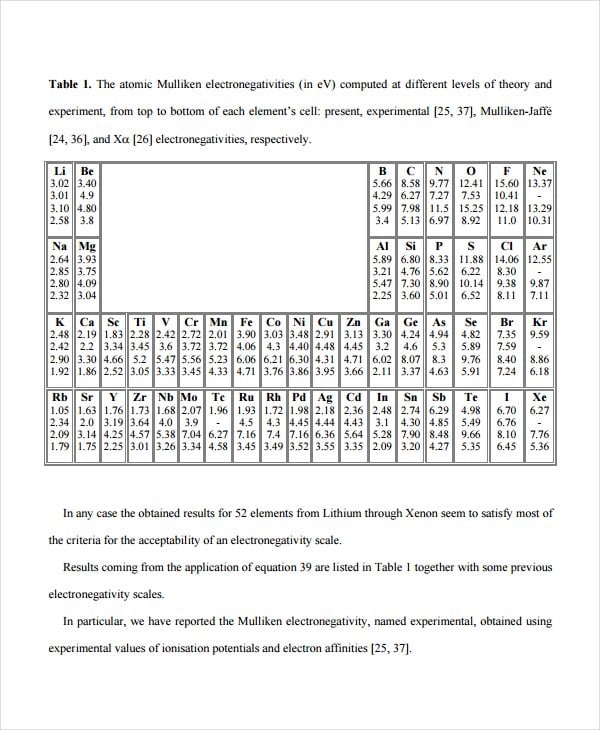 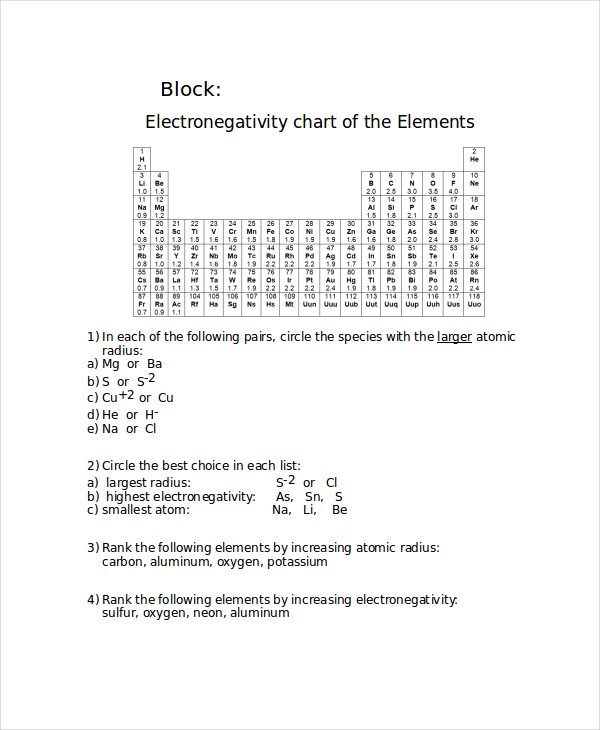 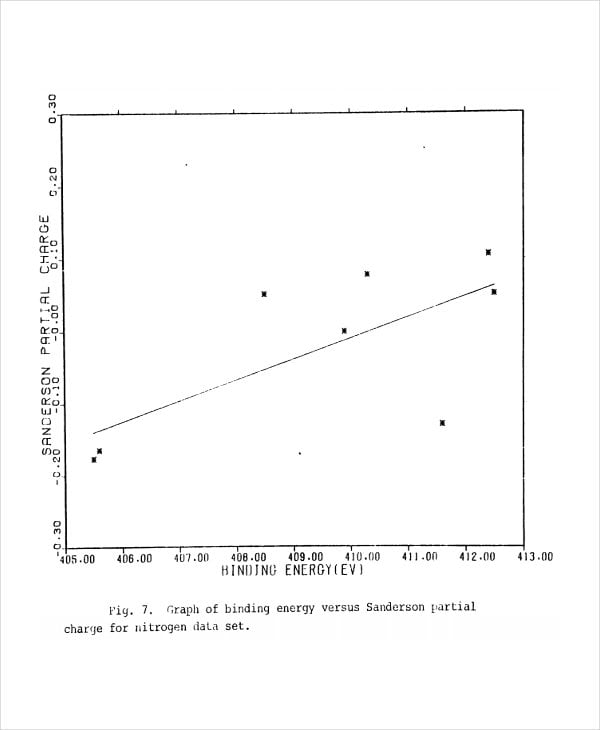 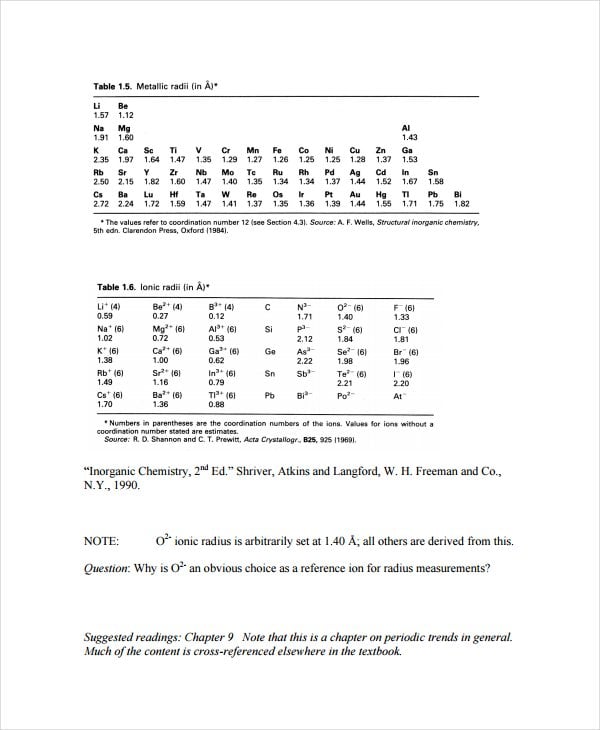 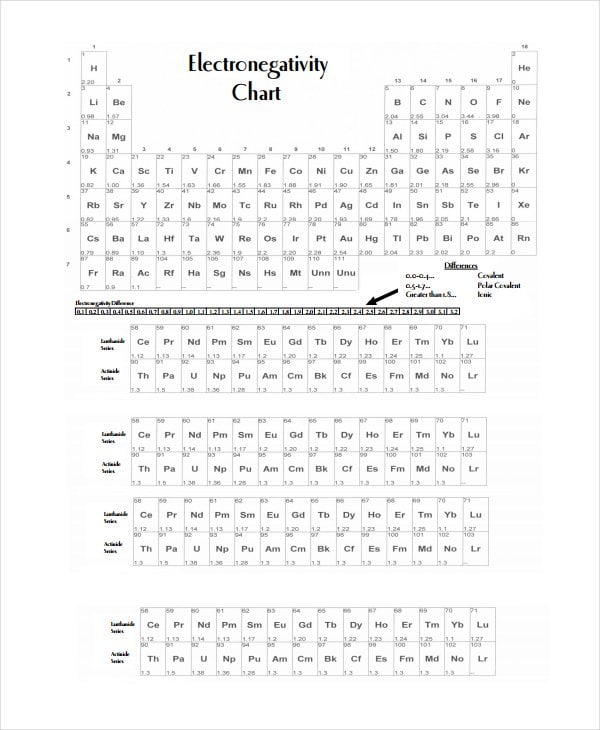 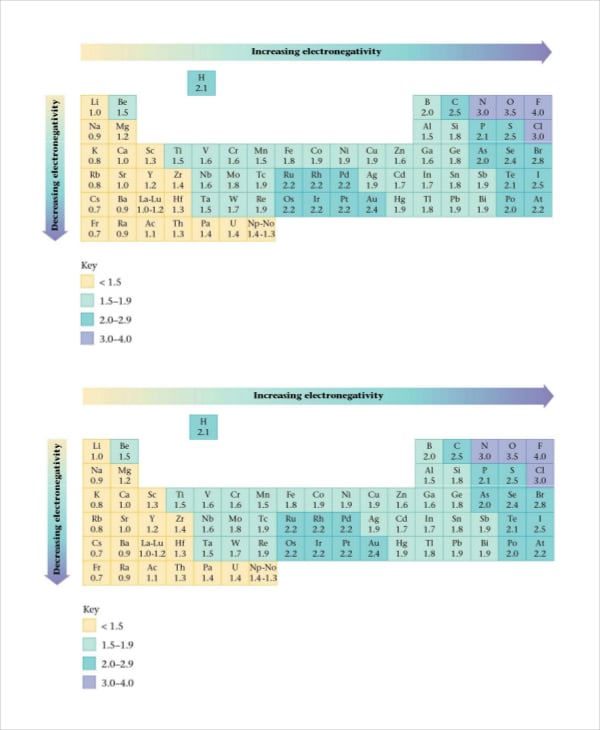 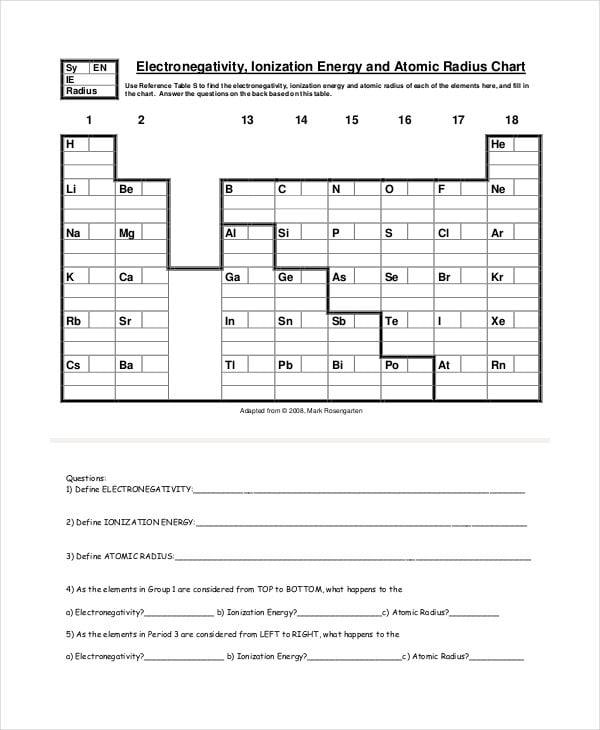 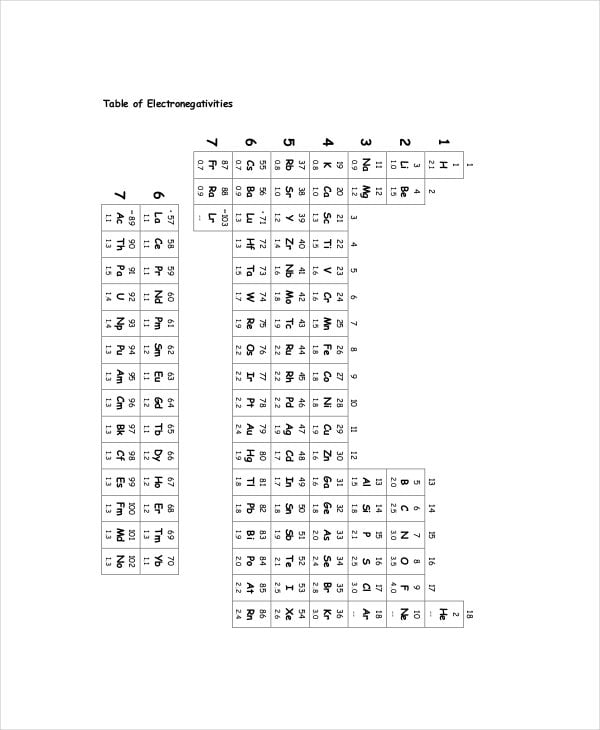 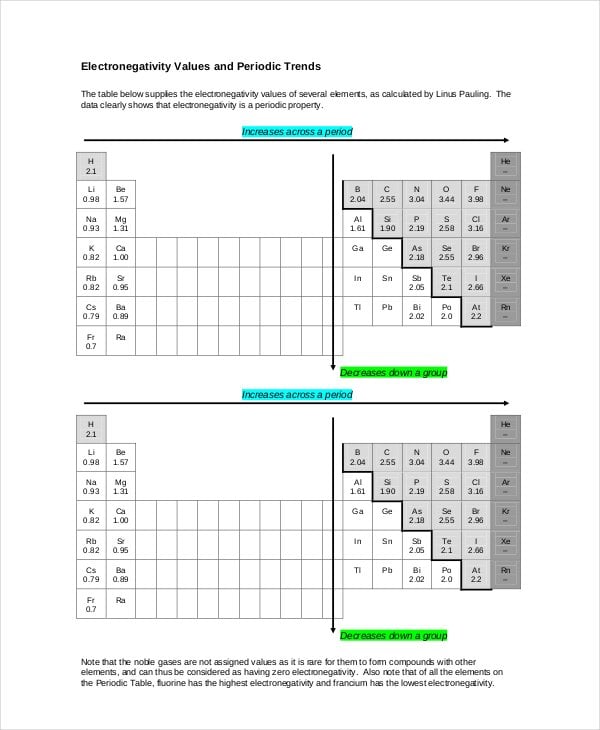 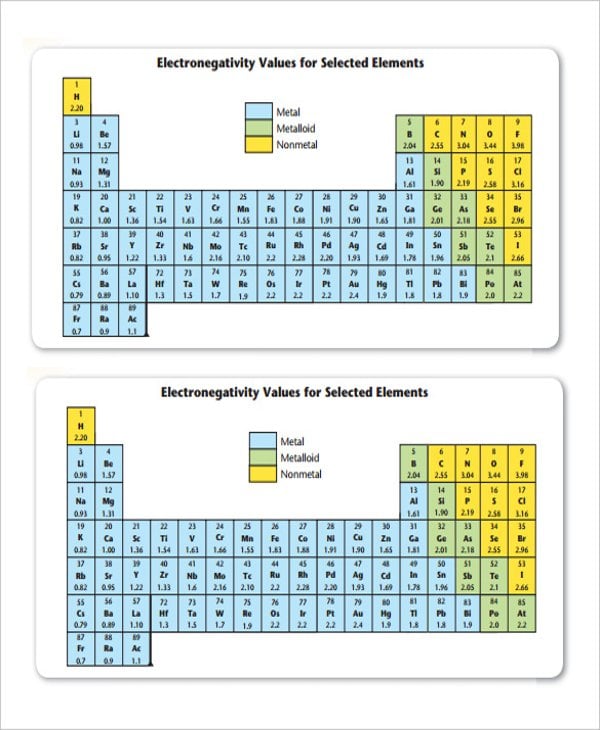 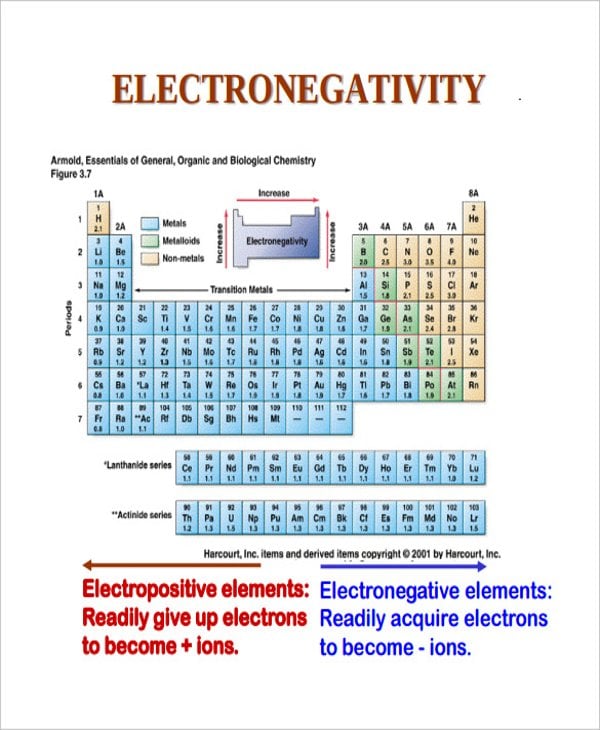 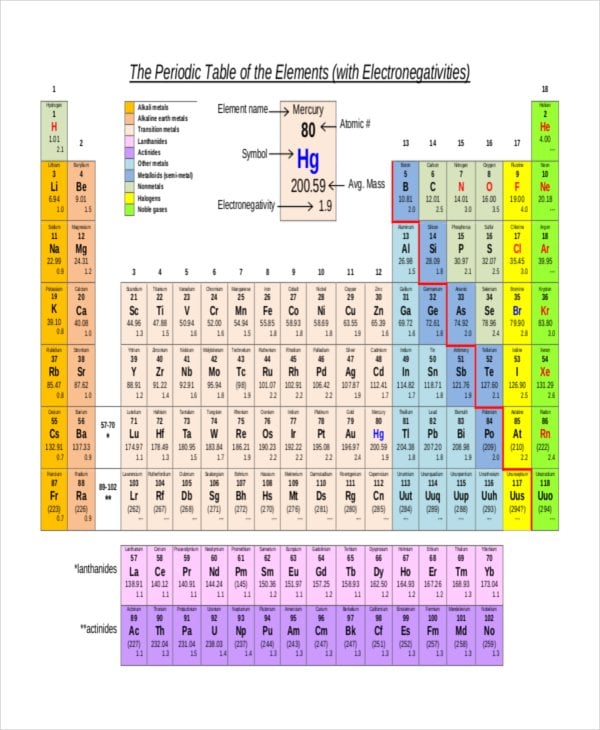 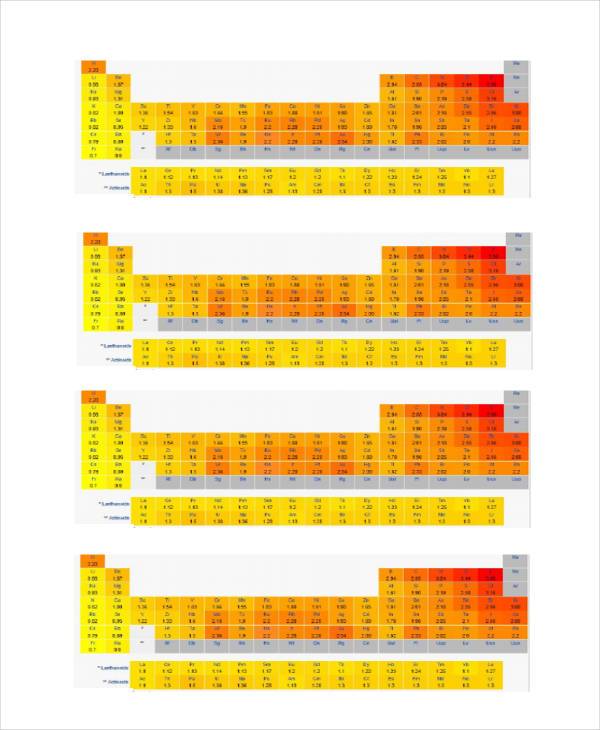 > What is a Polarity Covalent?

> What is an Ionic Bond?

A chemical bond that forms between two ions with opposite charges is called an ionic bond. Ionic Bond is the process in which the atoms of electrons transfer entirely in the bond. Ionic bonds form when one atom gives up one or more electrons to another. Take the example of Sodium Chloride.

> What Happens if Two Atoms of Equal Electronegativity Bond Together?

If two atoms of electronegativity bond together, then the bonding will be found on average halfway between the two atoms. And this could be considered as a purely covalent bond. That means the electrons in the molecular orbital move around all the time with the orbital. For example TH2 or Cl2. You may also see Flow Chart Templates.

> What is the Diagonal Relationship in a Periodic Table?

A diagonal relationship is a bonding within the periodic table by which individual elements in the second period have a close chemical similarity to the elements of the third period. A diagonal relationship is bonding between particular pairs of diagonally adjacent items in the second and third periods of the periodic table if we put it directly. As a result, the pairs of boron and silicon, beryllium and aluminum, and lithium and magnesium pose same properties.

> What is the Easiest Way to Remember a Periodic Table?

> What is a Nonpolar Covalent?

How do You Determine the Electro Negativity of an Atom?

Pick an atom with a higher value and then subtract that number from an atom with a lower value. The difference between the two is the covalent bond. Sure, the method is so simple, but that’s exactly how you would find the quality of the bond. Results below 0.5 indicate that the bond is non-polar covalent. Results between 0.5 and 1.6 indicate that the bond is a polar covalent.

What makes an Oxygen Atom Electronegative?

The first thing you need to understand is that the term electro negativity simply means the tendency to attract more electrons. Now, in answering the question above, we will assume a correlation between Hydrogen and Oxygen and use water as a preferable example since it has both oxygen and hydrogen.

Remember, the electro negativity of an atom increases across the periodic table. This Chart Templates explains why oxygen is more electro negative as opposed to hydrogen. Hydrogen, too, is electronegative. Unlike oxygen, though, its electro negativity is rather lower. As such, it tends to donate an electron to oxygen.

Which Element on the Periodic Table has the Highest Electro Negativity?

Fluorine is known as the most electro negative element in the periodic table. Its chemical symbol is F and it has an Atomic number of 9. It is important to keep in mind that at room temperature, Fluorine is a pure gas of a diatomic molecule. Moreover, it is the lightest element in the halogen’s family. Its primary color is pale yellow, usually in colored gas.

Electronegativity Chart Templates can be really helpful in measuring the tendency of an atom to attract the electrons. There is Best Tally Chart Templates available on the web easily and that has the information about all the elements present in the nature and they can be used for the many such purposes.