If you’ve ever used a Metric Conversion Chart, you know that these things save you a lot of time and mental power. Conversion charts allow you to translate one value into its equivalent in a matter of seconds. Speaking of seconds, one of the most-needed conversion charts is the military time conversion chart. The armed forces is notorious for operating under their own codes. Most notably, you have the NATO alphabet (“Alpha, Bravo, Charlie, Delta…”) and you have the military time. Military time format is known in several places as the twenty-four-hour format.

If you want to start using military time for practical (or arcane) reasons, these charts will be useful as training and reference tools. 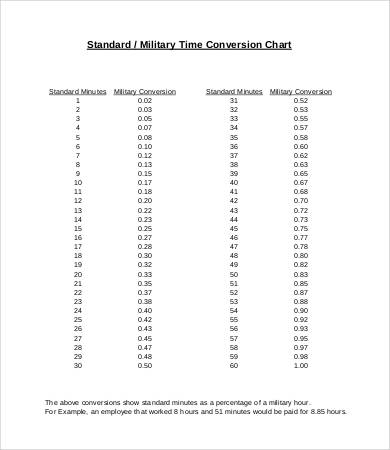 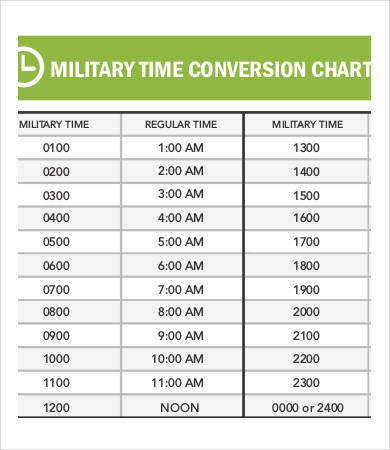 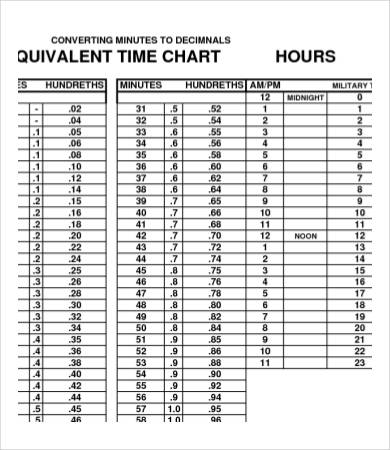 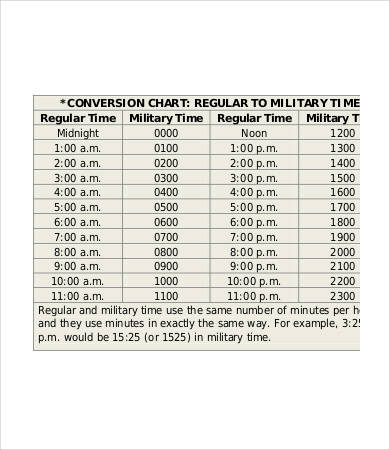 How Do I Convert 12-Hour Format to Military Time?

The Payroll military time format is actually available on your phone’s time settings. It is a format, or a measurement, that is not limited to the armed forces.

What it does differently from the usual 12-hour clock is that it calculates every hour as a separate hour from one midnight to the next. The 12-hour pattern starts at 1 again after 12 noon, while military time moves on to hour 13.

Each hour is a “hundred.” Just taking a look at some of these charts, you should notice the pattern.

You will often hear in soldier movies where the men are barking “fourteen hundred hours” to mean two in the afternoon.

They use this metric because it is more precise and is able to convey a lot of chronological information in short. And the military is all about efficiency and control.

You can get this in your own life as well by training yourself with these conversion charts. They are all available to download and print for free.

For other conversion charts to make your life easier, check these out: 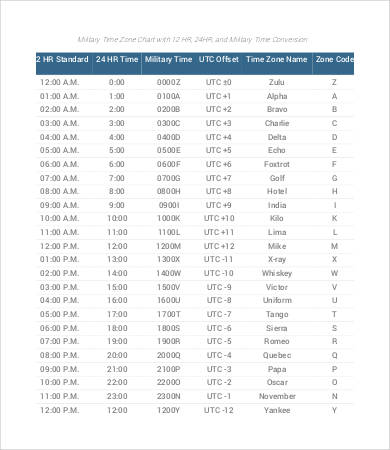 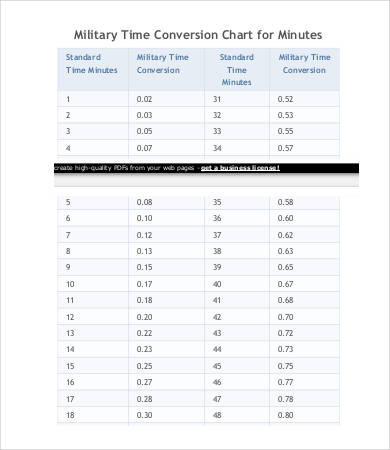 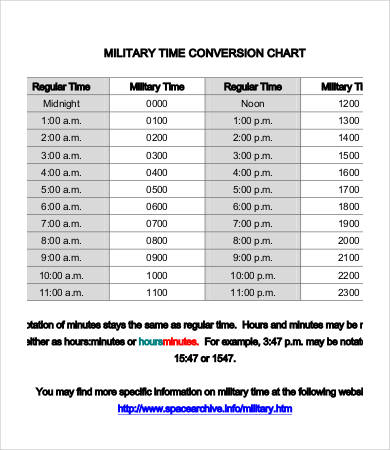 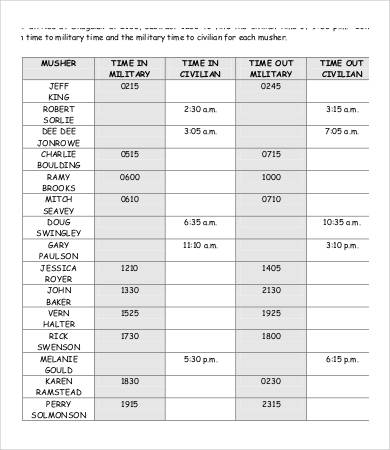 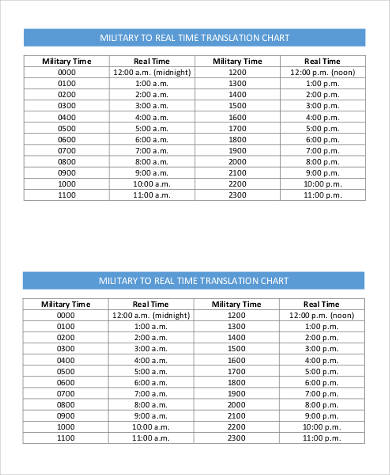 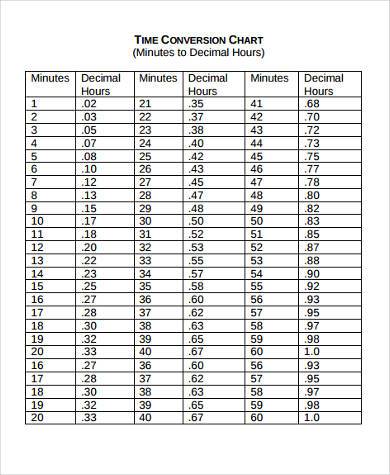 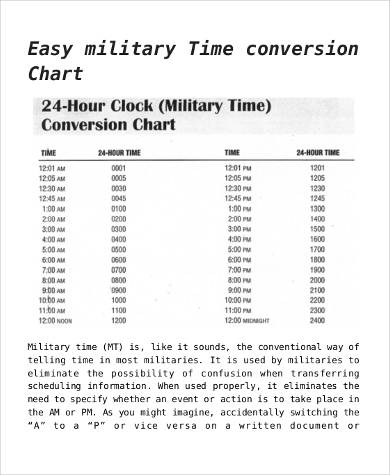 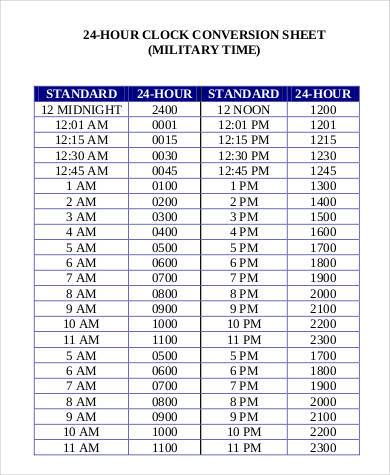 How Do I Use These Charts?

The first step is to download them. It’s fast, it’s free, it’s easy. The next step is obvious from there. Most of the conversion charts are merely for reference and will have different degrees of complexity. Any of them will help you get a solid grounding on how to convert from civilian time to military time cheat sheet, and in time and with practice, you might not need it anymore. (Which is more than can be said for a Metric Unit Conversion Chart Template, which you will need forever.)

Until then, these charts have your back.

What is Military Time Conversion Chart

In our daily life time is an important part of the day as it helps us in keeping a check on the routine. The military also uses time to keep a check on their daily routine and during the special military operations, the time plays a significant role but the fact is that the military doesn’t uses the standard format of the time. The military uses a slightly tweaked version of the time and the department uses a time conversion chart for the conversion of time to military format. For example, 1:00 AM in military time is 0100 hours and so on. Time Chart Template for the same is available online.

How do you Figure out Military Time?

It is easy to figure out military time and the hours from 1 am to the noon as same as the civilian time and hence there should not be any problem in understanding the time when it is between 1am and 12 noon. However, after noon, you would require to subtract 1200 to find the standard time. Once you have subtracted 1200 from the time, you can separate the two digits with colon and the two digits at the left most end will denote the hours while the two digits at right most end will denote minutes in the normal civilian time. Word Metric Conversion Chart Templates can be downloaded online.

How do you Convert Regular Time to Military Time?

How do you Say 10 am in Military Time?

While saying the time in military time, a standard practice of using 100 is used in the day to day communication. So as the question asks, 10:00 AM is written as 1000 in military format and it is said as 10 hundred hours. Care should be taken that this should not be pronounced as 1 thousand hours as the standard format includes saying hundred and not thousand. If it would have been 10P PM then it would have been pronounced as 22 hundred hours. While pronouncing the time when the time has minutes, each and every letter is pronounced during the use as per the Best Army Weight Charts.

How do you Say Midnight in Military Time?

It is always better to download Sample Chart Templates for military time so that there is no confusion as any confusion can cause a big problem in accounting of the time. A lot of people may confuse midnight by 24 hundred hours but this is totally incorrect and the correct way to say midnight in the military time is 00 hundred hours or Zero Hundred Hours. The reason for this is that the day starts at midnight and hence the time should also start from midnight so as per the standard procedure, the clocks are set to 0 at midnight in military time.

There are several places where military time is used. Most of the smartphones also have a feature to display the time in the military time format and the main advantage of that is the military time causes no confusion. Sometimes, because of distortion in the line, the other person may confuse AM with PM and hence that could cause a huge disaster.

To overcome such issues, military time is used across the world to pass on any critical information to the person on the other end. A lot of organizations also use time as per the military time standard and the same is listed in Sample Risk Management Chart Templates.