Writing and taking down notes, the simple thought of documenting what people are agreeing to and with, what a group of people are talking about and what each other’s suggestions are when they sit down and plan, make decisions or devise strategies is too often understated and sometimes forgotten, until such time you’re suddenly faced with having to rely on your memory for all the things everybody said and committed to. You may also see printable minutes of meeting samples.

In any organization, to say that the last thing a member of your staff wants to do is to be the one paying attention to a meeting so that he or she can take the minutes, is not far-fetched. Regardless of whether or not you look forward to doing the task, it’s something very important and often necessary that when your supervisor assign it to you, you’d do well to have an organized minutes for everybody’s reference. You may also see board meeting minutes templates.

Because at the end of the day, point of reference for what have been discussed during important meetings in a company, is what matters and meeting minutes makes up an equally important part of business record-keeping and documentation. 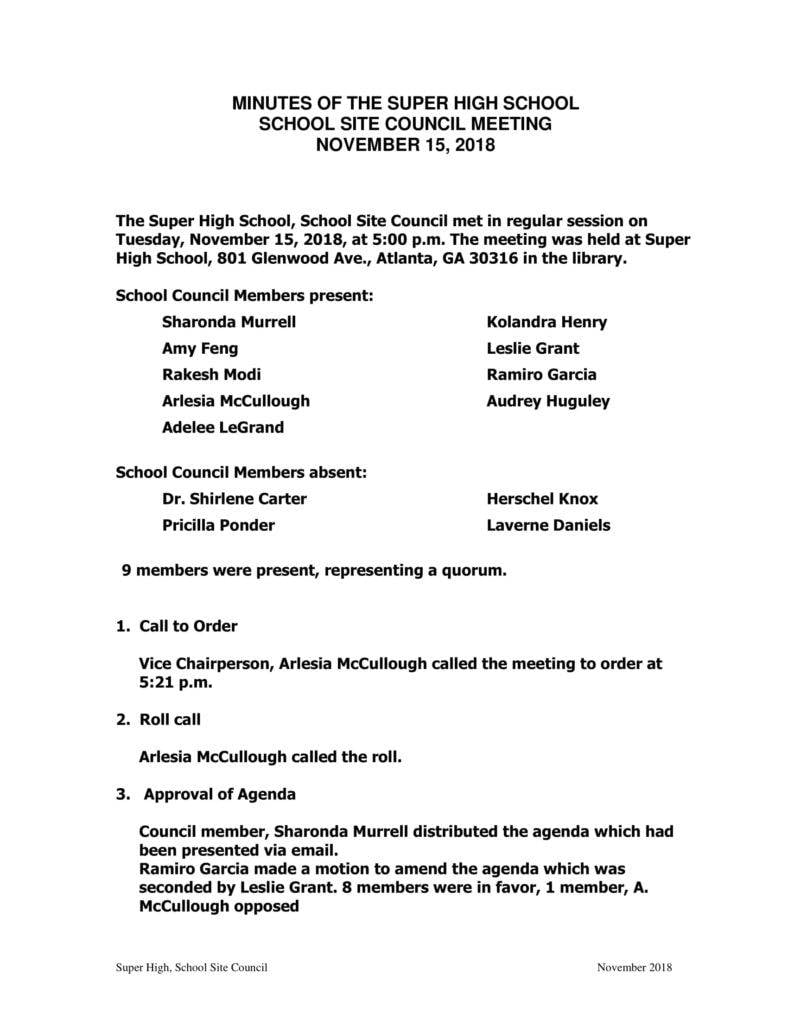 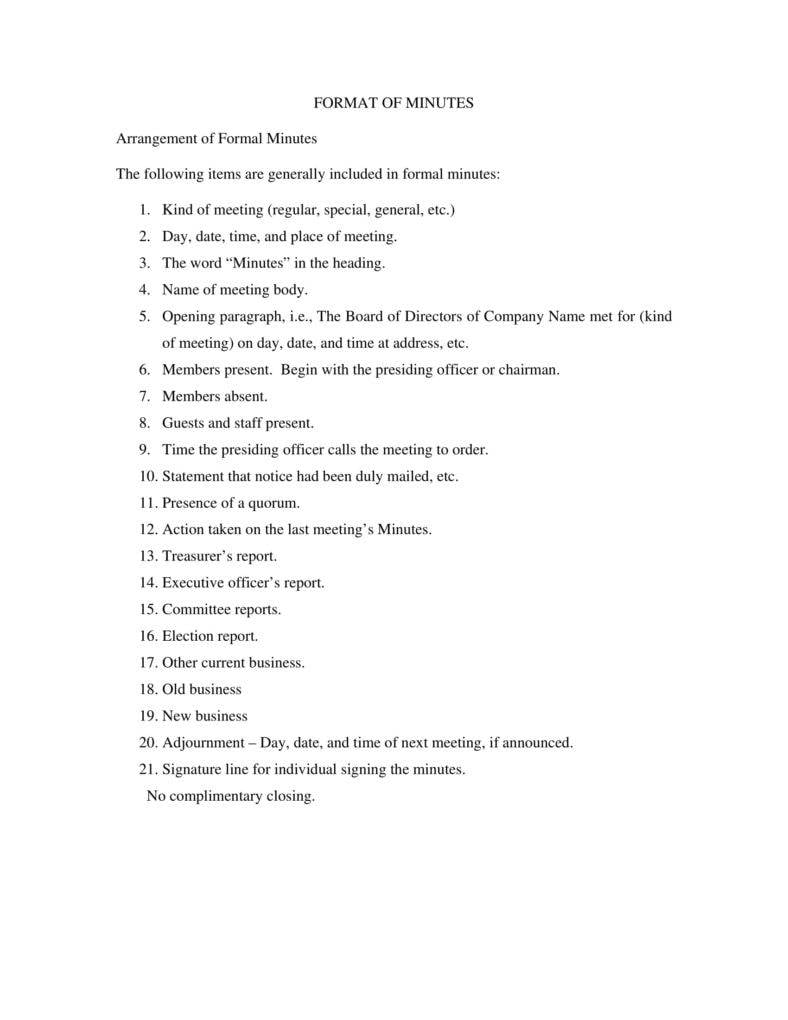 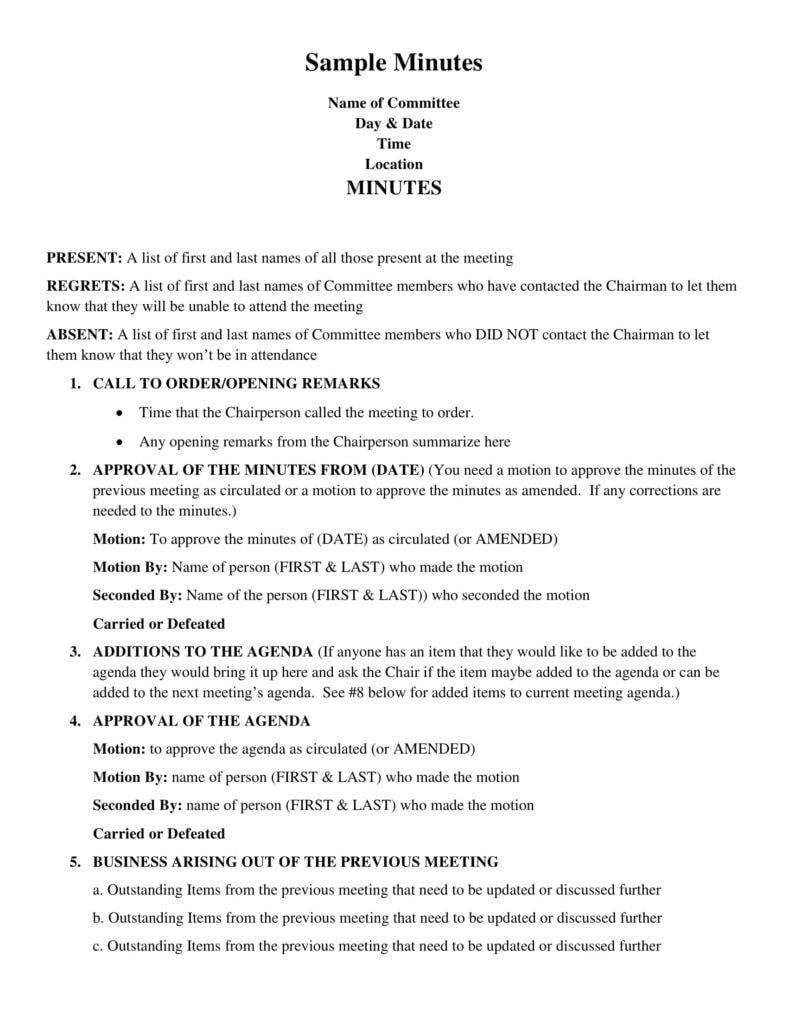 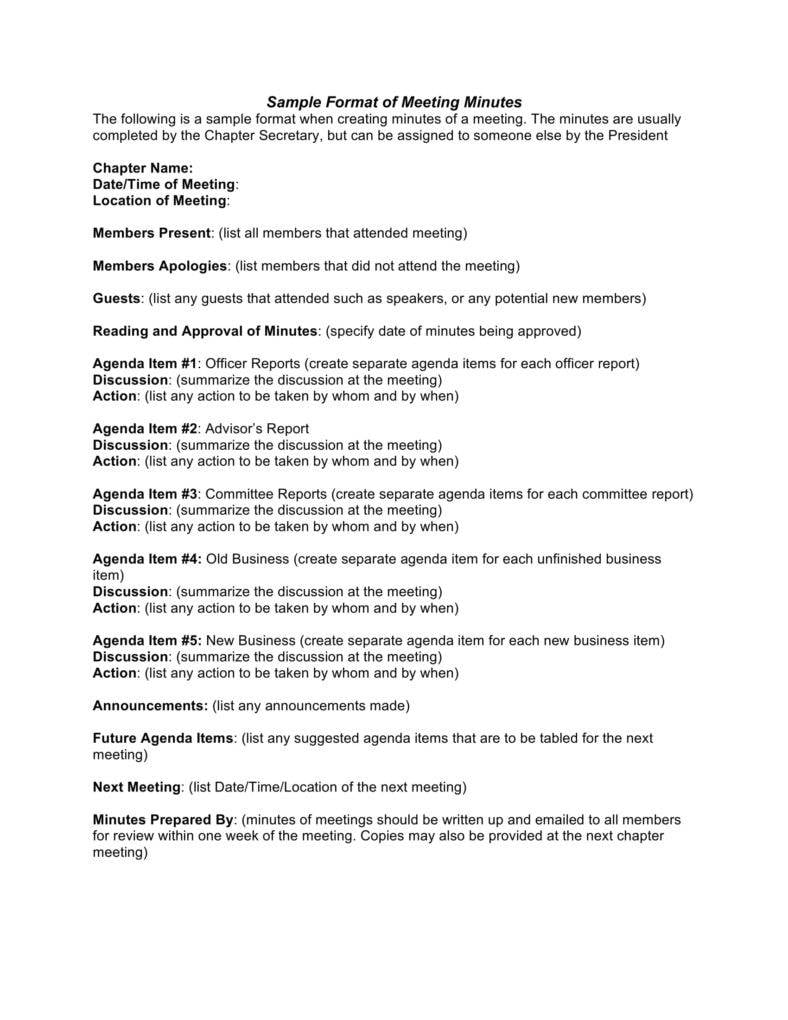 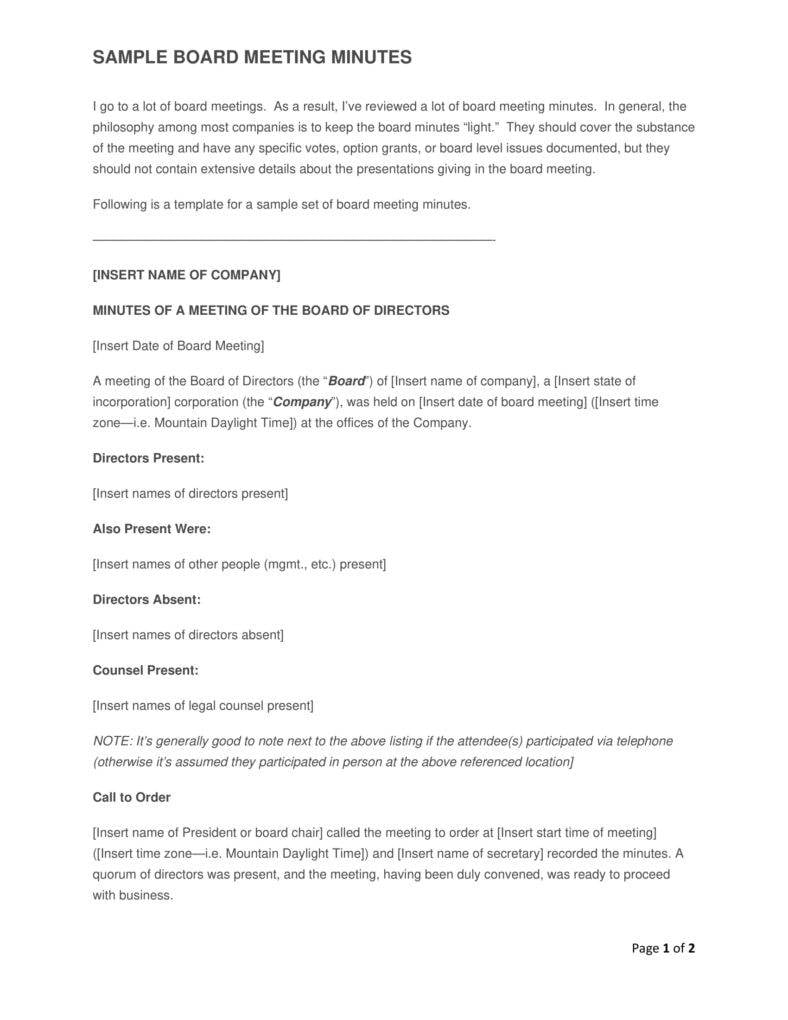 When talking about minutes in the corporate and organizational perspective, we usually refer to the process of formalizing an outcome for a structured meeting. There are definitely some existing guidelines as to how you can put together formal meeting minutes and what should be included versus that of an informal record for what you can safely assume as an informal meeting. Then again, if you have dedicated enough time in planning, coordinating and holding a meeting with the members of your team, it would be such a waste if you cannot aim for producing tangible results.

Thus, taking the time to carefully summarize points of discussion, key decisions, issues, and suggestions for the next steps to be undertaken by a working team, is only right. It also gives the participants a feeling of being valued for their efforts and is the best way to ensure you don’t have to repeat the things you have discussed with each other, for the next meeting. You may also see simple meeting minutes templates.

Minutes are very useful on so many levels, especially because none of us have such a detailed memory and even when you try securing personal notes and documentation during a meeting, it still wouldn’t be safe enough for the records since notes you’ve made here and there, have a way of getting lost, disappearing or being forgotten. Meeting minutes offer a more permanent way of having official records that can prove to be very useful to future members or participants in trying to understand how decisions or things came to be where they are, or what they are, in an organization. You may also see sample business meeting minutes templates.

First of all there have been quite a lot of debates and discussion about meetings; whether they are effective, whether they are done for compliance’s sake, albeit a waste of time. But since there are not many alternatives to meetings for collaboratively solving problems and effective planning, especially for a company’s long-term goals, it’s better to take advantage of meetings with your team or colleagues. You may also see sample meeting minutes.

The main reason why meetings are seen in a negative light in some organizations is that the results are not always sound and they’re not always seen. Even when they are concrete, participants tend o have different interpretations of what has been decided or planned when the meeting is over. You can’t be sure that everyone is on the same page with everyone having a different understanding of the outcome. These meetings also tend to put a focus on long-term goals so that it is easily quite forgotten, especially when people don’t pay much attention. You may also see free meeting minutes templates.

In this case, minutes taking is going to solve the problem of forgetting about the goal, if the goals and decisions are written down, people can look for them while implementing them. Handwritten notes, however, should never count as an alternative to writing minutes as they would be difficult to find after some time. On the other hand, you can be sure that minutes, counting as the official record, are kept in a safe place, with the people in charge having access to them, whenever they need to verify something. You may also see board meeting minutes examples.

The importance of taking minutes can be summarized into the following:

1)Board of directors meetings. Large companies and business corporations are required to keep track of certain practices and authorizations so that they can turn action into resolutions which the corporation would keep a record of. Failure to have minutes reflecting these resolutions accurately can lead to all sorts of trouble and risks that you can really do without. You may also see sample club meeting minutes templates.

2)Helping you in predicaments. Sure, you may think you’ve got every issue the company is facing, covered and that you’re in control, but if there are still some stuff going on which you and other members believe to be potentially damaging or may cause some issues in the future, having a good record through minutes with proper notations about who said what, what was voted on, things that were decided and things to be decided, can be very helpful should a legal fallout within the organization occur. You may also see meeting minute templates.

Five Reasons to Have Meeting Minutes

You probably already know how much legality means in the success of an organization. Minutes offer important details you simply can’t take for granted if you want to maintain your business’ compliance with state laws, and have a strong backup for your tax returns. Minutes reflect the actions that the board has taken, the establishment of company leadership, and are also considered legal documents by the authorities; auditors, the IRS, and the courts.  If an action a business has claimed merits to isn’t in the minutes, legal experts will maintain with conviction that it didn’t happen, and rightfully so. You may also see sample construction meeting minutes templates.

There may be no standardized format for taking minutes, however, the authorities consider it vital that you do it properly and make an effort in creating and writing down facts of the meeting. You must therefore make sure, that as someone tasked to do the minutes, you would study how it should be done to sufficiently describe how members of the board arrives at tangible decisions. You may also see board minutes templates.

You should also write down the name of your company, attendance, date, and time, the person who presided over the meeting and note all motions made by a quorum, only if there’s a quorum. Take note of issues such as conflicts of interest, members who decided to be excused from voting and who developed the minutes for the day, for the reference of the next taker. The current minutes should then be submitted for approval and signed by the board at the next meeting. You may also see annual meeting minutes templates.

Well-taken minutes help in the driving of action plans for both the workforce and the management team. They define the what, where, when, and how. They allow you to map out business plans which would get things done. For team members who weren’t able to attend the meeting for valid reasons, they provide more than reference, since they are also a source of valuable decision-making information.

It wouldn’t be as easy to keep tabs on meeting decisions and have a very good reference document in evaluating progress if it weren’t for meeting minutes you have access to. This is also a good tool for accountability because responsibilities and actions that people have committed to are pretty much on record and in detail. You may also see project meeting minutes templates.

Accountability is important when it comes to decisions, especially those decided by a board or members. Ownership works the same way. Votes that are recorded with names of who voted for what and which people abstained from voting, serves many purposes, that goes beyond being taking the blame or responsibility of motions taken which led to a decision because it gets members somehow protected from trouble with the law if the majority has approved a motion that caused a lawsuit to be filed against them. If one ember for example abstained, he isn’t accountable and he is considered to be set apart from the majority who needs to face the legal suit. You may also see meeting minutes samples. 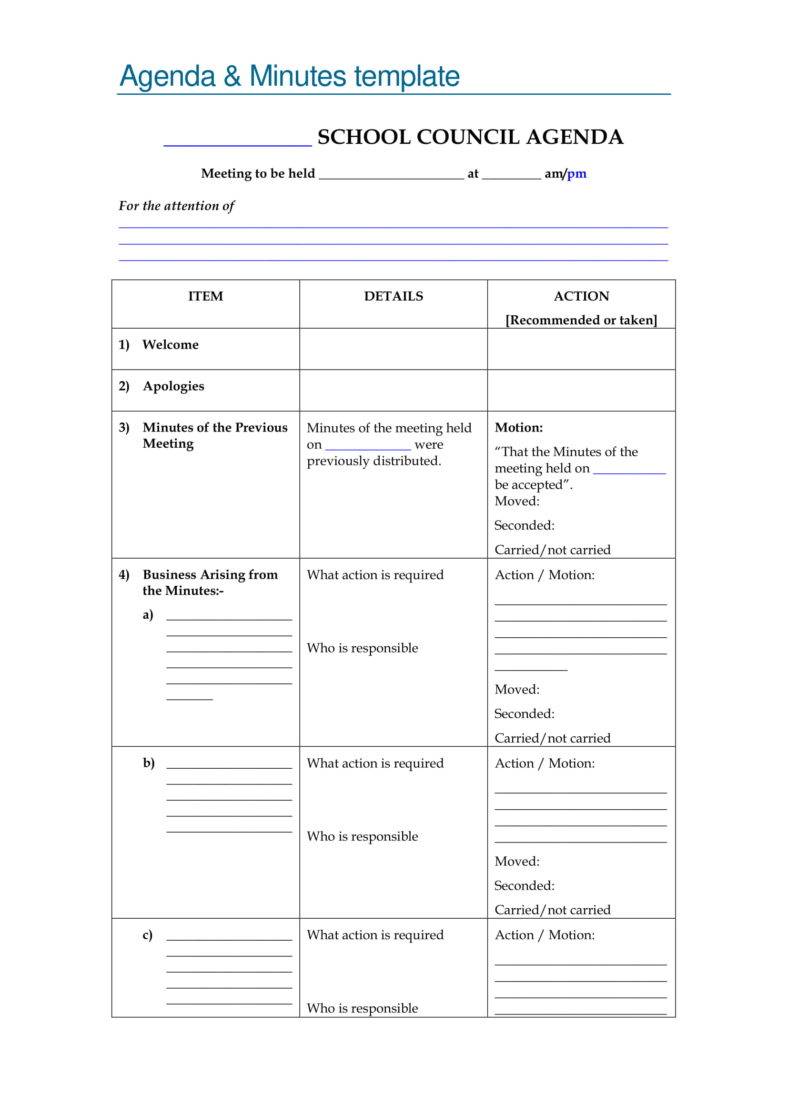 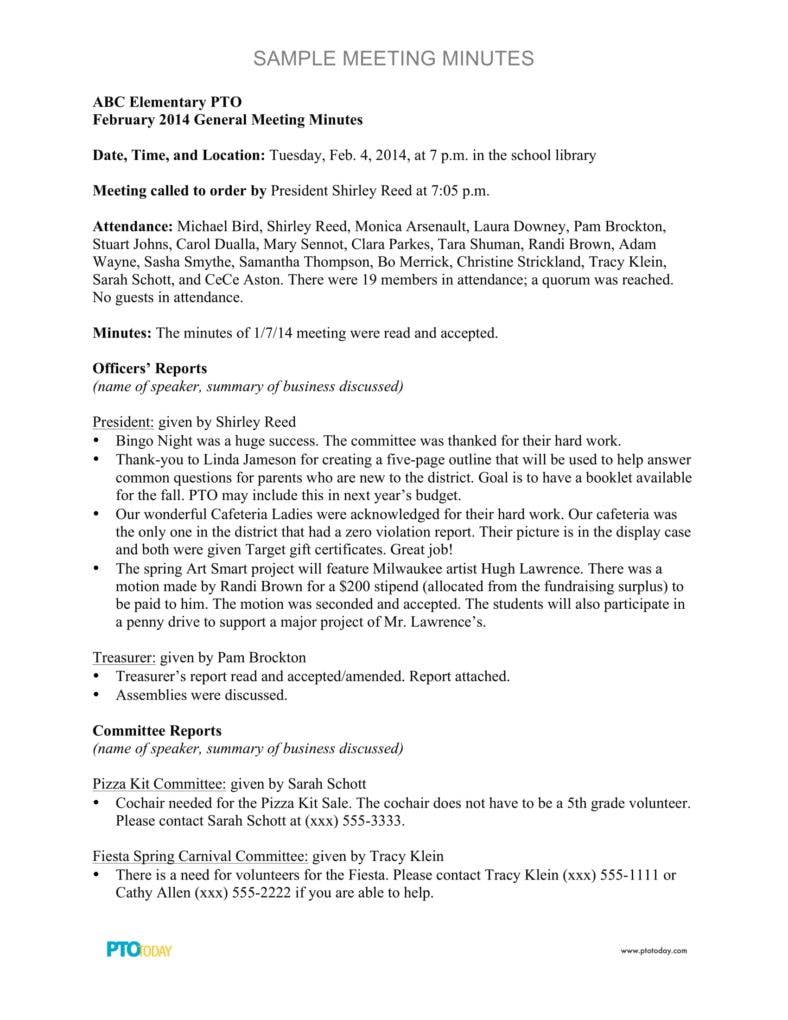 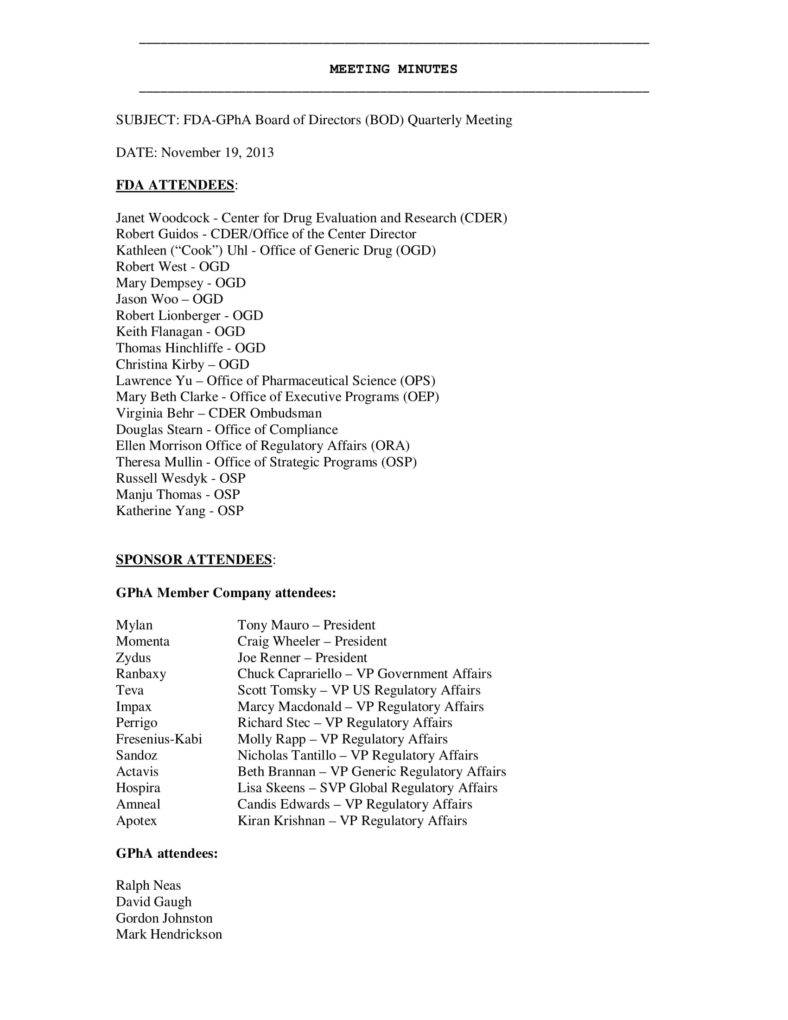 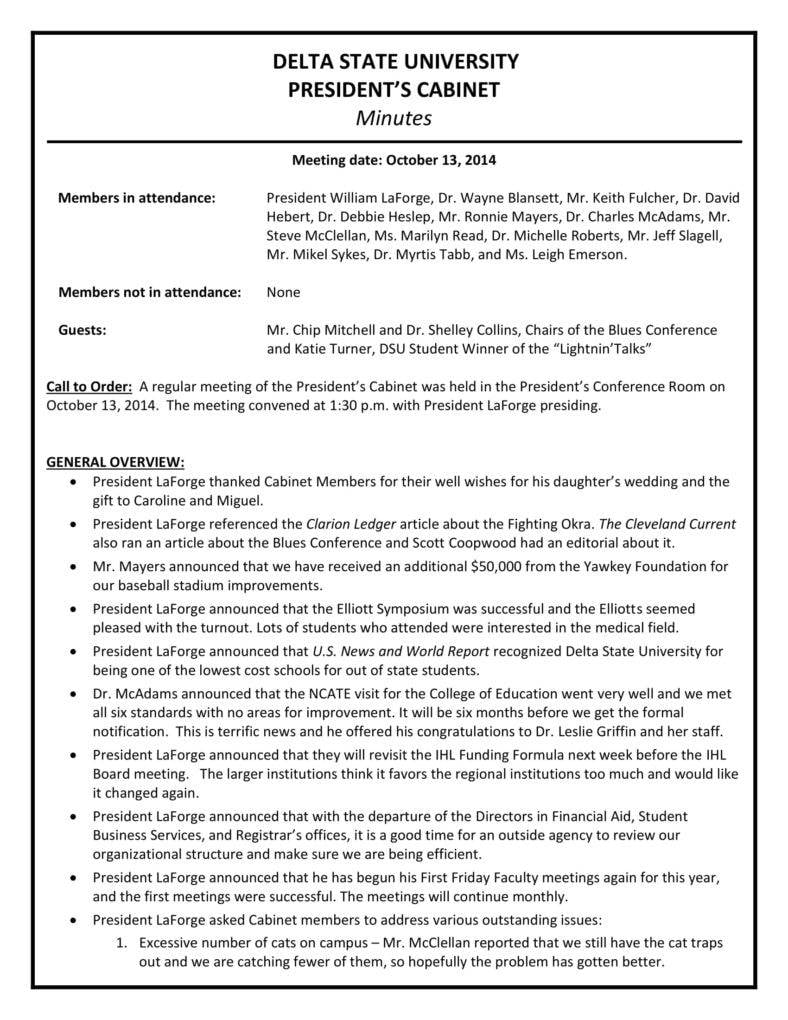 Meeting minutes can be complicated, oftentimes long and adds to your already piling workload. The good thing is, it wouldn’t really pressure you as much, since you need to take it real-time, in the board room, where meetings take place. They can also be short and concise, depending on the agenda of the meeting and the discussion. You may also see sample informal meeting minutes.

Naturally, emergency meetings would need a detailed record, making sure that everything is accurate, organized and clear. When it isn’t of critical importance, you can just make a simple list of what has been decided and what actions where suggested to be taken regarding issues and concerns, although in general, minutes should be as simple and short as possible, highlighting all important information. You may also see business minutes templates.