Work life in a sense can be like heaven and hell. You experience hell when you have disagreements with some of your co-employees or when you get reprimanded by the boss for a simple mistake and nothing but hatred and frustration clogs up your thinking because you believe that you were right. Yet, there are times where it feels so good that you just want to go to your office every day and stay there for a longer period of time. This could be for numerous reasons. You may also see Meeting Minutes Templates.

It could be because you like the people you work with, you enjoy your job, you had success with your team, your boss surprisingly acknowledges your effort out of nowhere or you had a successful turn result in a project with your team. You may also see construction meeting minutes templates. 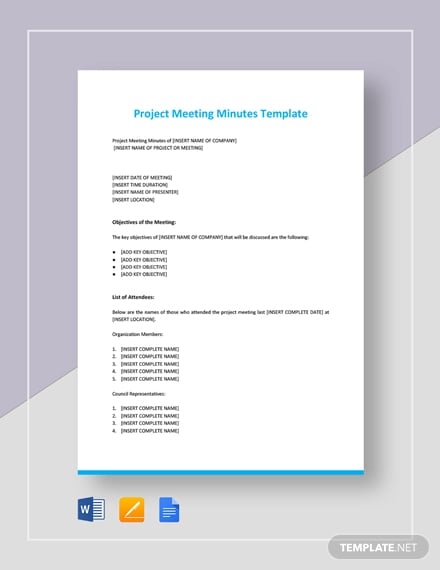 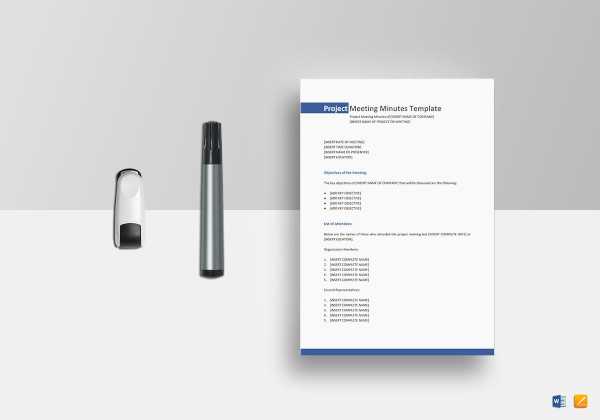 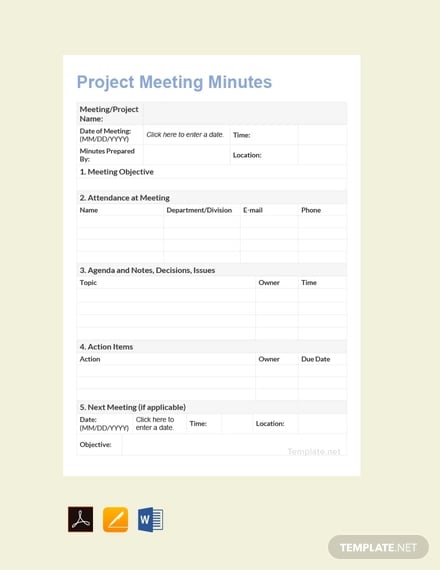 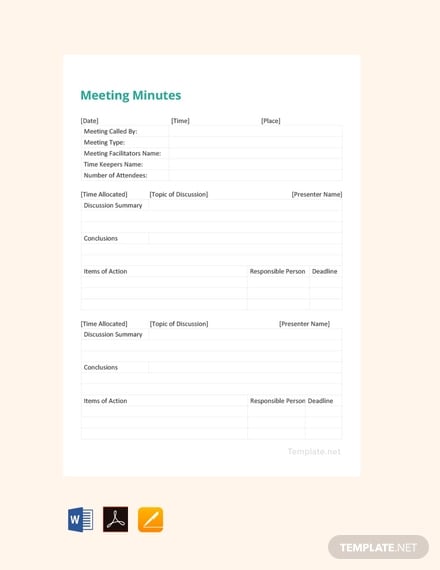 Success can never own up to its name without careful planning and hard work. Often, success needs to be planned out because one knows that you can never make it to the top right then and there. A team in the office needs to plan it out first before they actually do something for the success of the project and they can do that by having a project meeting.

This meeting will have topics being discussed, agreements and disagreements, a votation on whose suggestion to go to at the end of each topic that requires a decision, making of short and long-term goals just to have an intellectual group discussion to find the best solution to have a successful project. It involves people who are creative and eager to take the company to a new level by making projects that are community oriented. You may also see team meeting minutes templates.

This kind of meeting usually happens when the manager announces that there will be an annual event coming and that he would want a team to do a certain project and achieve with flying colors by the end of it all or maybe there is already presence of a project team in the company and that they are already assigned to it  because it is part of their job description.  Then, they will get to decide on when and where the project meeting would take place. Normally, they would assign people to specific tasks that they should do for the benefit of the meeting that will be taking place as soon as possible.

One important task that someone would get assigned to is doing the project meeting minutes. To know what the project of the meeting is and knowing its parts, read the next sub-topic after this paragraph. Make sure you take down notes if ever you have a future of becoming the one assigned to do the minutes of the meeting for your team in a big or small project.

Project Minutes of a Meeting Sample 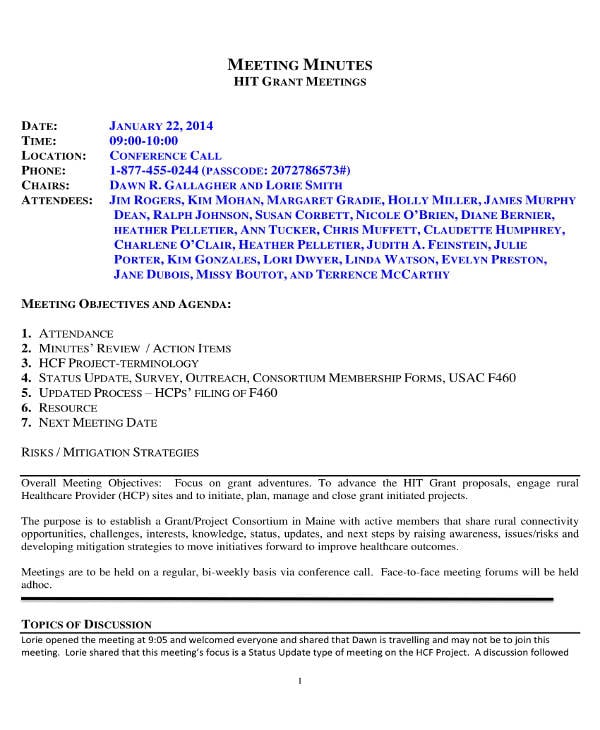 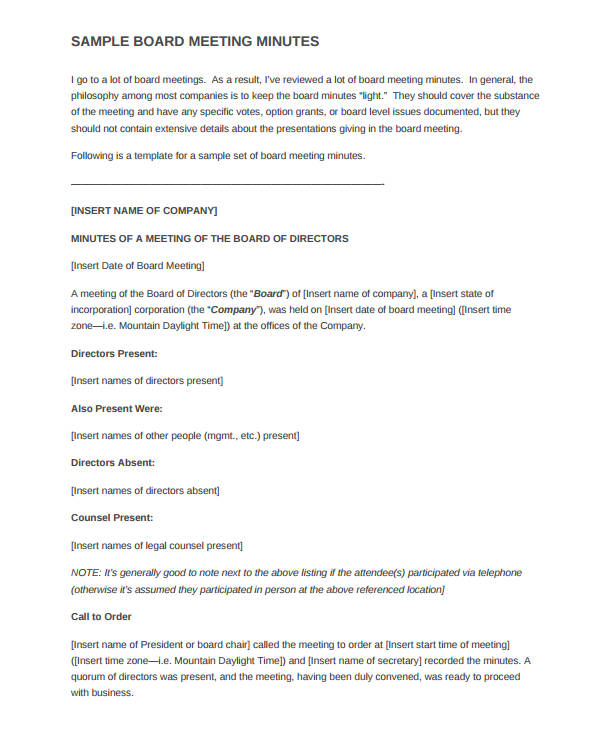 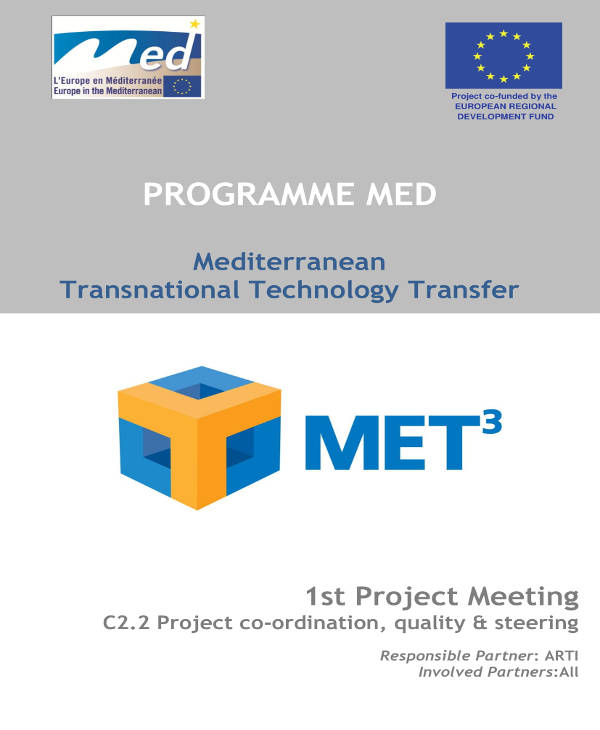 Minutes of a Meeting 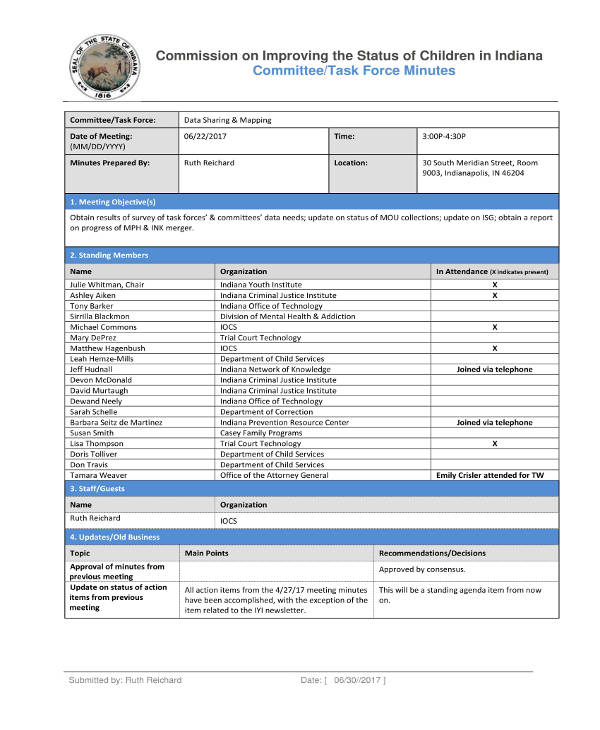 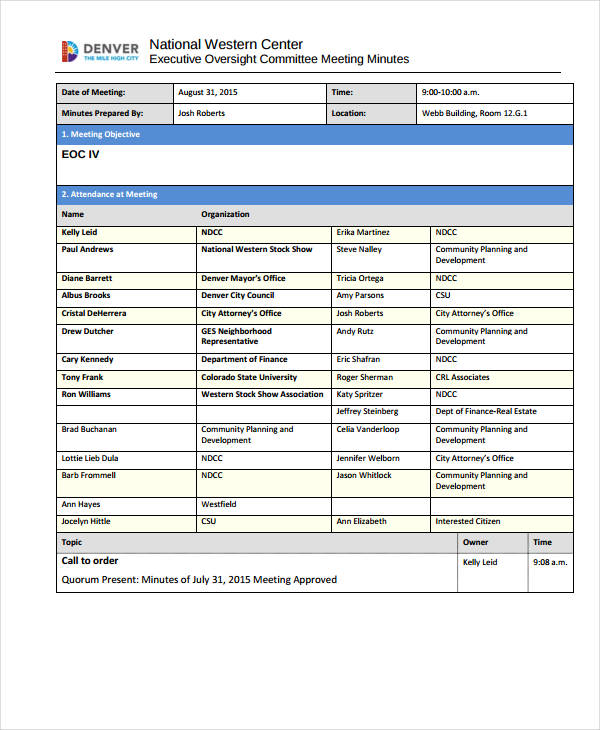 The Definition and Parts of Project Meeting Minutes

This is what comes first in every minute of a meeting. This will be composed of the different agendas and topics that are supposed to be discussed for they will be of good use to the project whenever there is a need for the topic to have a conclusion through votation of opinions from the members in the meeting. The heading will also consist of the name of the committee or the team. Do include the address of the meeting and what time it is expected to start and the time it is expected to end. You may also see business meeting minutes templates.

2. Checking of attendance of the members

If you are also early, the attendees could inform you right away if there is any part of the day that they might leave for a while or will be absent. Make sure they tell you what specific time they would leave and know the reason why for such a surprise. Not only will you be able to record the attendance of the members but you will also gain a good impression from your office mates as someone who is disciplined enough to wake up early. You can carry that discipline all throughout your work life which is really beneficial. You may also see committee meeting minutes templates. 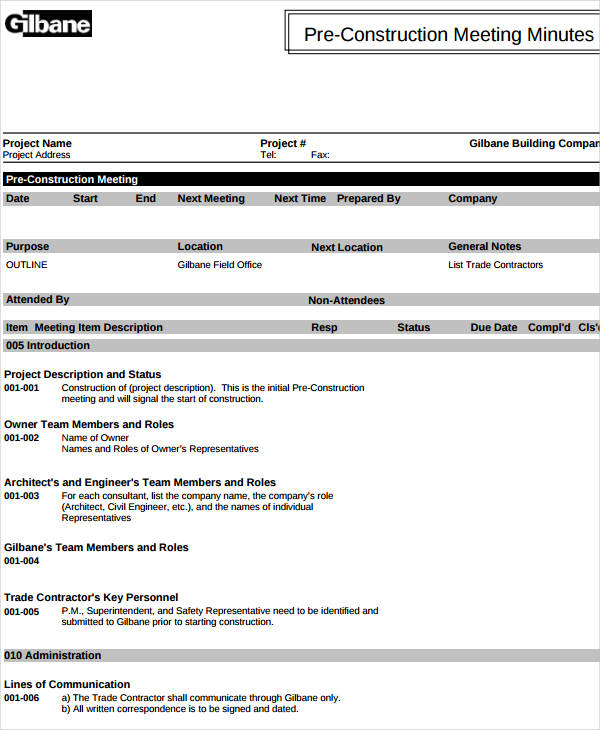 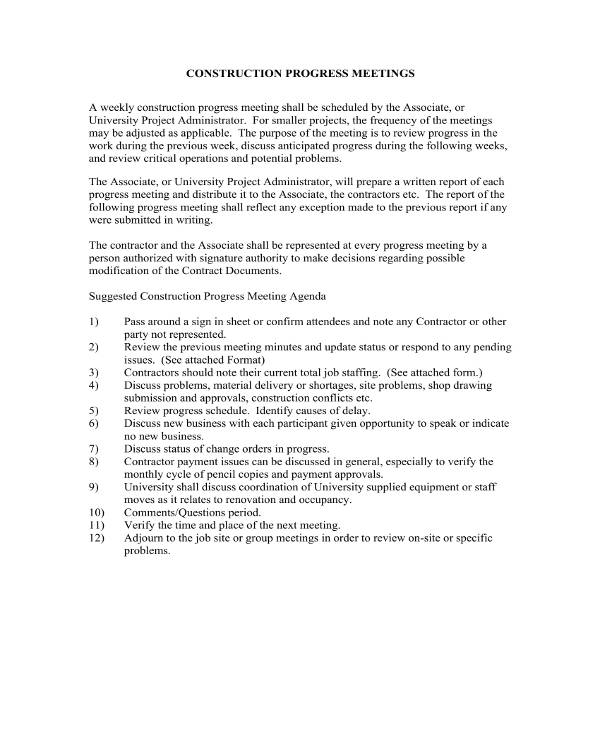 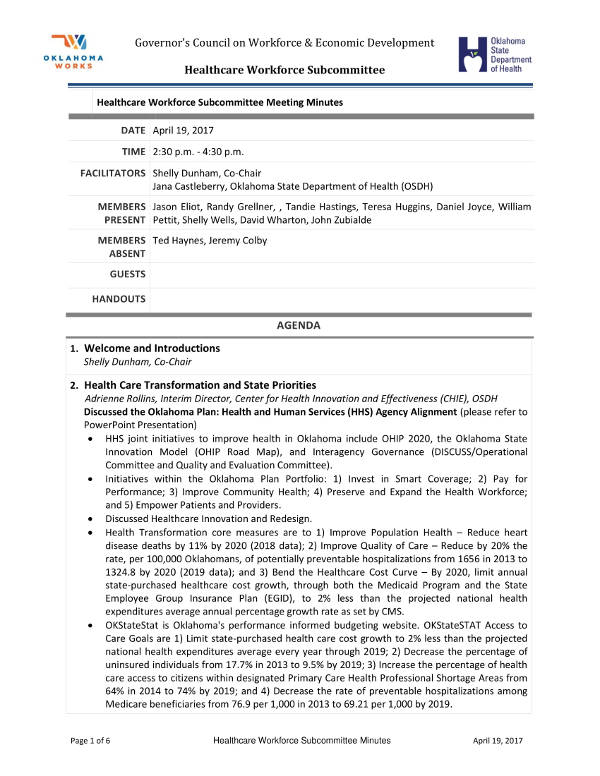 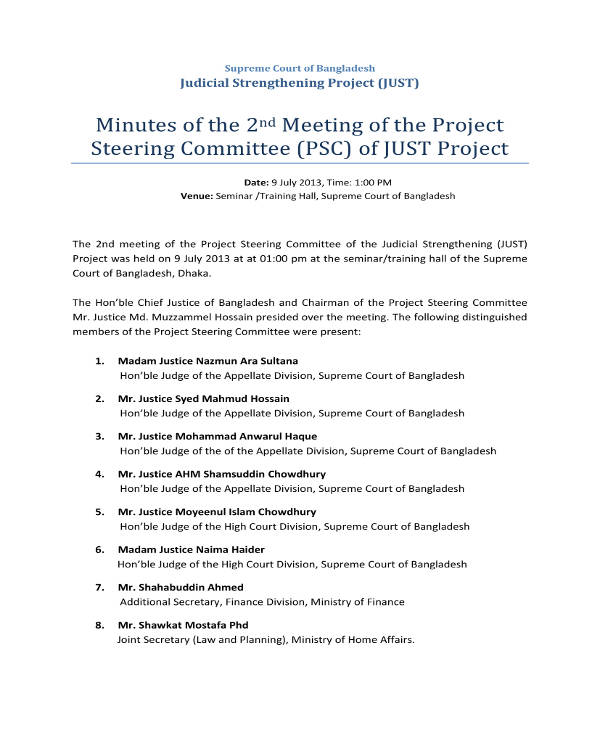 3. Discussion of topics and agendas

This is the part where you would write the things being discussed and who is assigned to talk about it. After which, you would write some of the suggestions, queries, and conclusions. You take note of the important parts that have been taking place in the meeting especially the end results of each agenda and topic. Also, take note of the people that suggested or gave their own personal opinion if to you it is relevant to the current agenda at hand. You may also see staff meeting minutes templates.

It is important to always have your full attention on the matters being deliberated so that you would not miss any important detail that can be crucial to the success of the project in the long run. Do not always look at your phone and scan through social media if you are already bored. You have a task to do, better do it properly and professionally. Take note also of the people who were assigned to do a specific task based on the conclusion each agenda and topic.

Before the meeting would end, someone might make important announcements. This might be simple office reminders or team reminders but it is still important to take note of these things so that everyone would remember once you have passed the final minutes of the meeting document. You may also see safety meeting minutes templates.

The one who is assigned to do and record the minutes of the meeting will write the actual time the meeting had officially ended. He or she should also note who is still present in the meeting during the end of it and note who left earlier with a specific time. You may also see board meeting minutes templates.

This is the final part of the project of the meeting minutes document. It is where you would write your complete name and affix your signature to assume responsibility. This means that everything you wrote in the document is the truth and nothing but the truth. If some issues, and we mean legal issues would arise, you will be held responsible because you basically wrote everything their. You may also see annual meeting minutes templates.

If you get caught overstating something or making something up because of your own bias, this will give you a bad name not only towards your team but also to the company. You would eventually get fired if the manager thinks you have done a great deal of crime. This would let you have a hard time searching for a new job because of your bad reputation that your boss would spread to other companies or by your own co-employees. 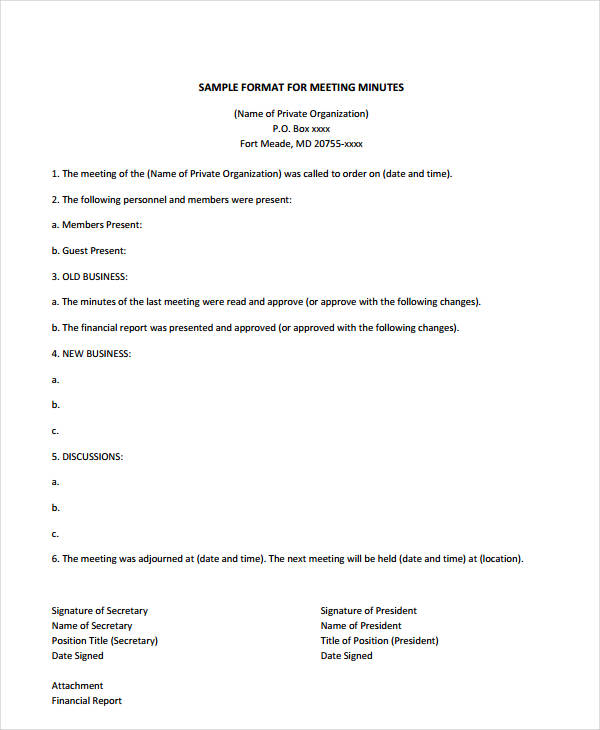 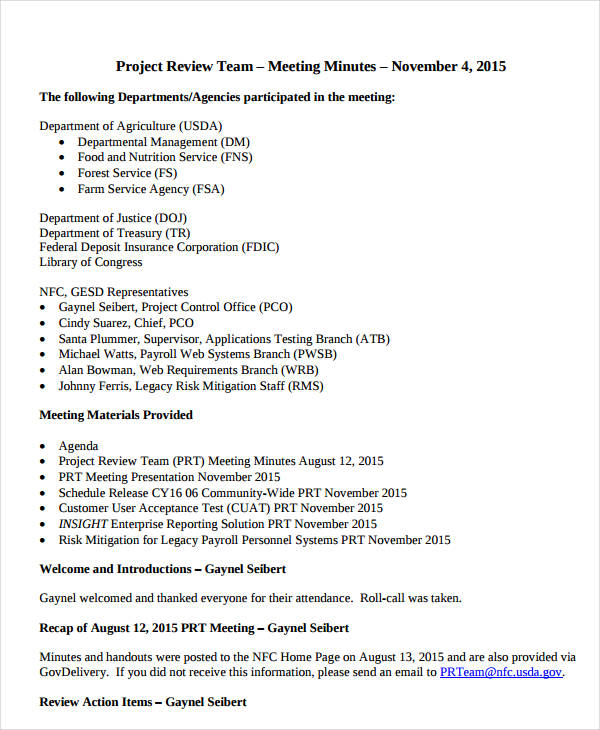 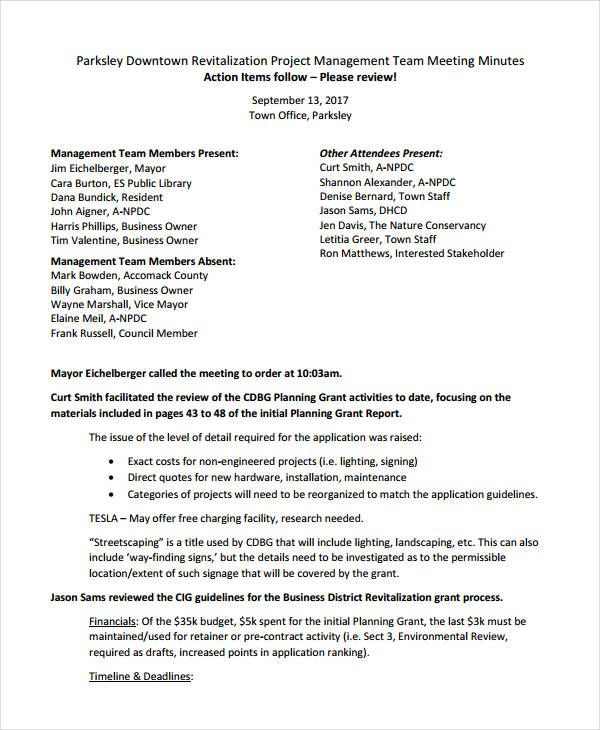 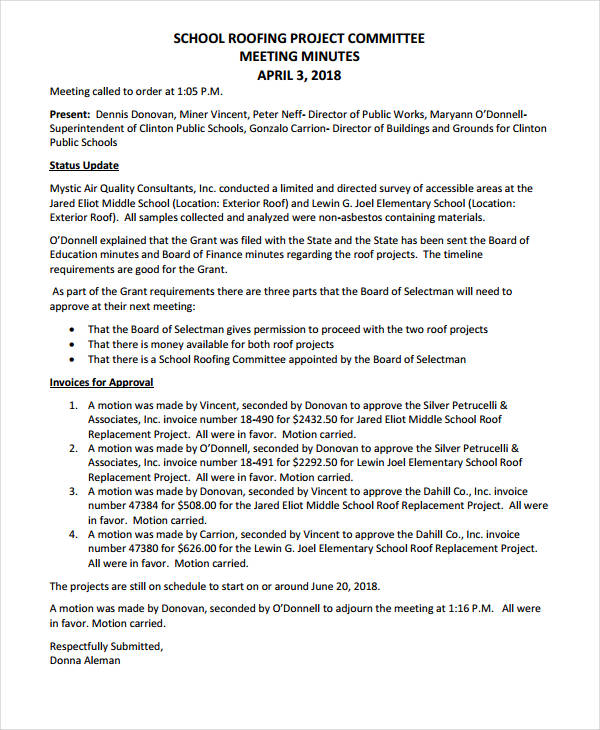 Those are the basic and general parts of minutes of a meeting or in this case, a project’s minutes in a meeting. Make sure that you are honest and attentive in the meeting as this responsibility is something big and your teammates are trusting you to do good in this. Do not ever lose their trust and just do your job properly and hope for the success of the project.