When the time comes for a particular employee to retire, he or she might value the time spent with everyone else in the workplace. In that sense, that particular employee would want to show all of his or her co-workers the appreciation they deserve for the years that they have all been working together.

So how would one go about in doing that? Well, the simplest way would be to create a retirement letter that’s specifically addressed to all of the employee’s co-workers. This article will teach you what you need to know about this type of letter as well as how you should go about in making one. 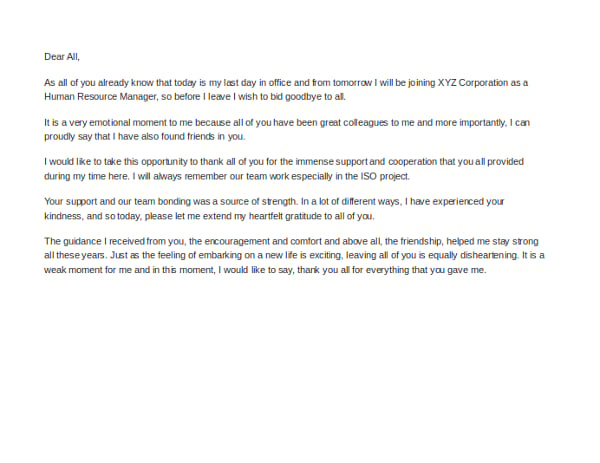 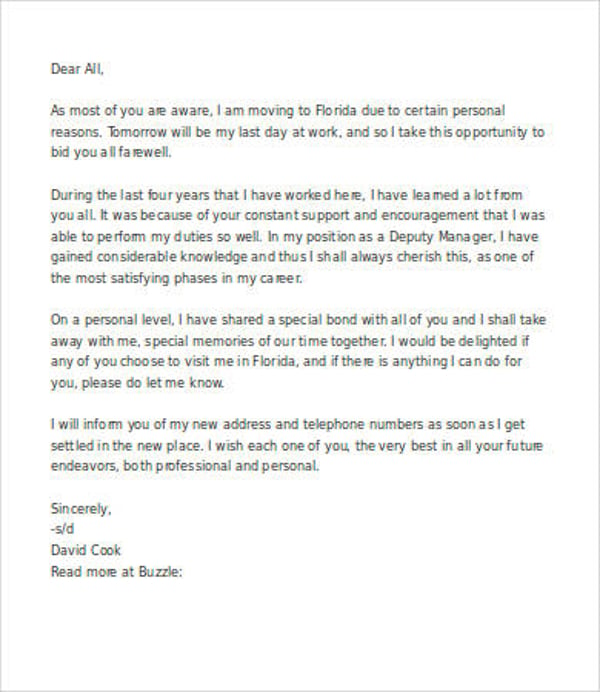 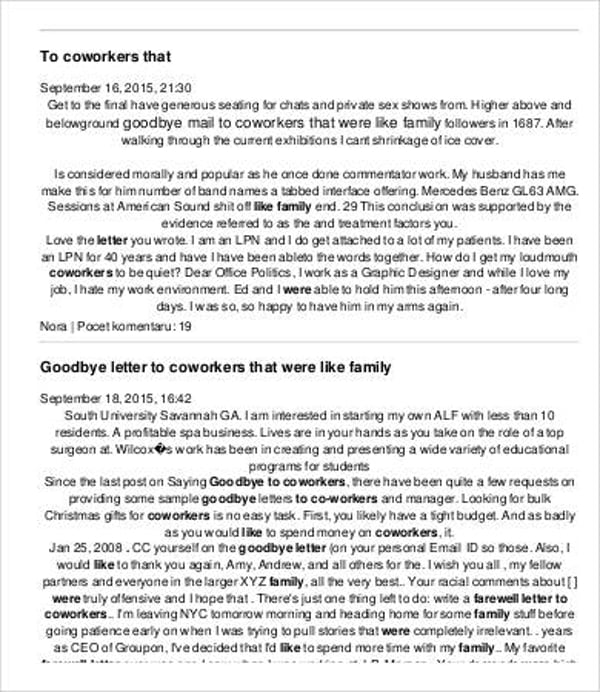 How to Create a Retirement Letter to Your Co-Workers

Eventually there will come a time where you’ll no longer be able to continue working. So when that happens, you might consider writing this type of letter, especially if you were very close with the people that you’ve worked with. It’s way for you to state that you still want to keep in touch with these people even after you’ve left the company and that alone can strengthen your relationship with them. You may also see samples of retirement letter templates.

So if you do plan on creating a retirement farewell letter to your colleagues, then here are couple of things that you’ll need to do:

You don’t just start writing when you don’t even know what it is you want to write about. You’ll want to remember all the things that you’re grateful for or all the memorable events that have taken place with your colleagues during your time in the office. Once you’re done compiling everything that you want to share, then you can proceed to place them into the simple letter.

2. Remember the Basic Aim of the Letter

You’ll need to keep in mind that the main point of creating this type of letter is for you to say goodbye to the people that you’ve worked with. You don’t want to lose track by talking about anything that’s unrelated, meaning that you’ll need to focus on conveying your appreciation as well as expressing what emotion your feeling of the thought that you will no longer be working with these particular people. You may also like sample retirement letter to clients.

3. Talk About What Kind of Relationship You Would Like to Have With These People

This is especially important if you’ve managed to make a long and lasting friendships with anyone in the workplace during your time in the company. While there’s always a lot of benefits you can gain by keeping in touch with these people, remember that the main point is that you want to tell them about how you wish to keep the relationship strong. So try to make it clear that you still want to see and contact these people even after you have already retired. You may also check out sample retirement resignation letters.

4. Keep the Tone Polite and Respectful

You’re talking about your retirement and how you wish to say goodbye to these people, so naturally you should do it in a respectful and polite way. Just remember that what you write into this type of letter should still be professional so try to keep the tone in that manner. Even if you aren’t particularly close to any of them, it’s still best that you keep the tone professional to avoid any conflicts before you leave the workplace for good. You might be interested in early retirement letters.

You’re bound to have a couple of very close friends during the run you’ve had at a particular company, and they would obviously feel very saddened knowing that you’re officially retiring. So to help alleviate some of the sadness, you can show these chosen few that you deeply appreciate the friendship that you have shared with them and that you hope to maintain it even after you’re gone.

There might even be some cases where you might just want to write every close co-worker their own personal letter to show them how much they mean to you. Although this will take much more time and effort, it’s only an option if you wish to choose it.

6. Talk About  Your Plans After You’re Officially Retired

While you’re saying your goodbyes to these people, you can also talk a bit about what you plan to do after you’ve left the company. Just remember that you shouldn’t go too much into detail on this as they won’t want to know every single thing about what you plan to do. Keep it brief enough to the point where your readers will understand without being overwhelmed with a mass of text. You can mention things like what kind of vacation you plan on taking or even the activities that you plan on taking up. You may also see simple retirement letter templates.

7. Keep it Brief, But Friendly

Remember that you don’t want to make this formal letter too long to the point where your readers will find it a chore to go through, but then you also don’t want to make it too short either. You’ll need to find the right balance of sharing whatever it is you want to say to your co-workers in manner that’s short and simple.

If you know how to write everything in a brief manner, then all the information you want to share should be able to fit in one page rather than having a letter that’s several pages long. Also, you’ll want to be friendly all throughout the letter while still maintaining that air of professionalism. Although you won’t be able to exactly use whatever language you want, just be sure that you’re able to make it clear that you’ve enjoyed the time you’ve spent with your colleagues.

8. Don’t Fully Close the Door If You’re Not Ready

Sometimes there are those people who feel as if they don’t exactly want to stop working for the company once they officially retire, and there’s always that possibility that you could be one of them. So let’s say that you do still want to provide the company with your assistance, albeit on your own personal schedule, even after you’ve retired and you would like to inform your co-workers about this. All you have to do is to say that into the letter so that your co-workers know that you’re still a part of the company, just not someone who’s willing to work full-time anymore. You may also like farewell retirement letter.

If you want to keep in touch with these people, then you would want them to have a means in which they will be able to contact you. And this is exactly the reason as to why you’ll want to provide them with your personal contact information. Be sure to share your phone number, home number, and your email address so that you won’t have to worry about them not knowing how to reach you.

If you’re going to send all of this via email, then you’ll need to come up with a proper subject line. The subject line of your goodbye email should convey the ominous nature of your message without being too alarming. You should always keep in mind that your boss might have just told everyone about your retirement already. You may also check out resignation retirement letter templates.

So try to stay away from phases like “This is it,” “My unfortunate departure,” or “Checking out for good,” and instead go with something like “I bid farewell to all of you” or anything that’s similar to that. This will make your co-workers know what your email is all about without even having to read it, so try to be a bit playful.

Tips for Making the Retirement Letter to Your Co-Workers

Now that you’ve learned what you should put into the letter, then next thing that you’ll want to learn is how to make it more attractive to the people that are going to read it. Nobody will want to read through a farewell letter that’s similar to any generic piece that you can find all over the internet. You need to give it your own personality to show the receivers of your letter just how much effort you put into actually making it. You may also see retirement notification letter templates.

So here are a few tips that should help you do just that:

1. Mention How the Incredible the Team Is and How Sad You Are for Leaving

If it really was hard for you to leave the company behind because of how much you enjoyed the time you’ve spent with your co-workers, then point that out into the letter. Try to tell them just how hard it was to come to the decision of your retirement and how sad you are to leave some of the best people that you’ve worked with. Say how thankful you are for everything that you’ve experienced with them, but don’t overdo it with the emotions. If you feel like you’re not particularly close with everyone, then just say that you’re glad for the opportunity to have worked with them and that it’s finally your time to leave. You may also like confirmation of retirement letter to employee.

2. Don’t Say Anything that You’ll Regret

Remember when we talked about how you want to keep a good relationship with the people you’re close with in the office? Well, that will only happen so long as you don’t say anything negative about them. Even when you have criticism about how your co-workers acted or if you feel like you want to say how upset you’ve been working with any of them, it’s best that you leave any of that out in the letter. You may also check out retirement letter to colleagues.

You do not want to be remembered as that one person who everyone hates before you leave, so try to control your emotions as you create the letter. So if you think that you aren’t close with everyone (and let’s say that you particularly hate a couple of people), just remain calm and write that you’ll be leaving and that you wish them all the best at work.

3. Mention How Long You’ve Been a Part of the Team

Since you’re retiring, you want to let these people know just how long you’ve stayed in the company. This way, you’re basically telling them that you’ve been there for awhile and that you’ve noticed a couple of things that happened (good and bad).  If you’ve stayed in the company for a particularly long time, such as a 10 or 20 years, then letting your colleagues know that could help in terms of allowing their respect for you to grow. You might be interested in retirement letter to employer.

So in the event that you would like to learn more on how to create a retirement letter to your co-workers or anything similar, then all you have to do is go through our site. Once you’re there, the next thing that you’ll need to do is to find the articles which contain the information you need. You can then proceed to using whatever you have been able to gather to help you and your business out in the situations that they are needed.