It’s that time of the year when the rate of couples tying the knot is rising, and in our other article that talked about wedding invitations, we mentioned a few reasons why many women prefer to get married in June. But what usually comes before the wedding day? A bridal shower, of course. Some would consider bridal showers as something similar to a bachelorette’s party, but some would also consider it as a different kind of event.

But regardless of what you think, we can all agree that this event takes place days or weeks before the actual wedding day and that it involves gift-giving, games, and other exciting activities. But to be able to gather attendees, you will need to send out invitations, of course. Below is a collection of various bridal shower templates and designs that you can use for that purpose, go ahead to check them out.You may also see card Templates. 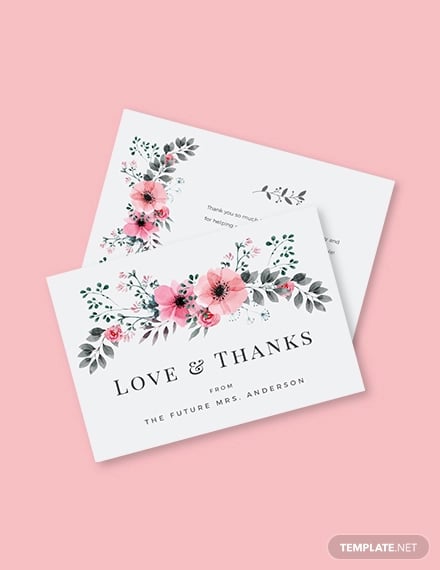 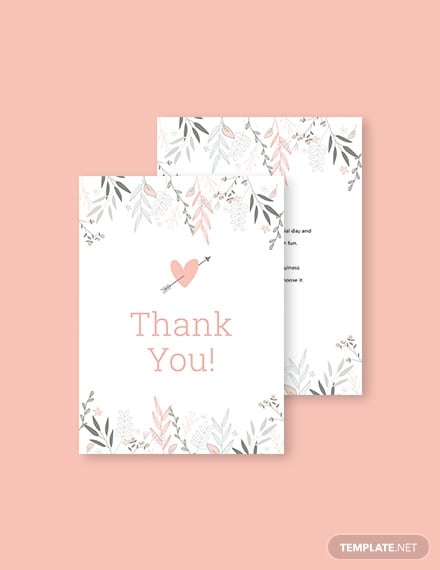 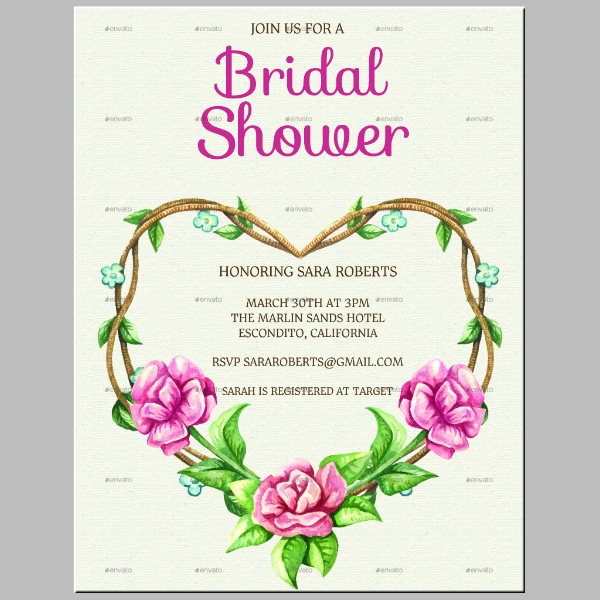 Want your invitation to look simple and have a rustic theme? Why don’t you check out the artistic bridal shower template above? The design is very straightforward while retaining its level of visual appeal. 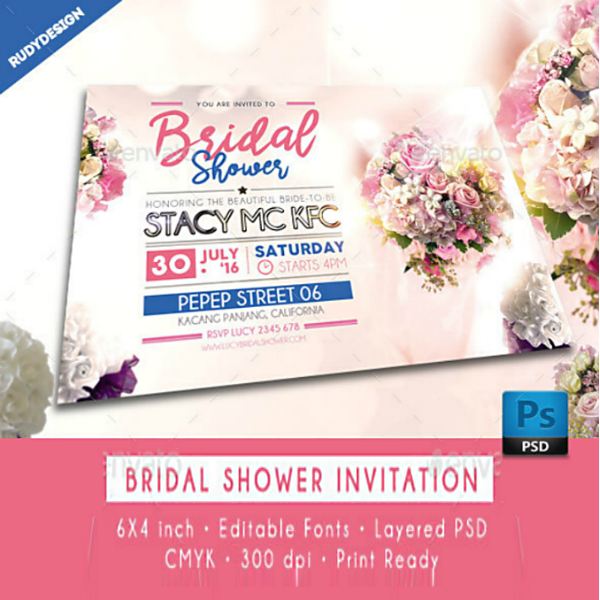 According to tradition, the bride should have her own bouquet during the wedding, she brings this bouquet as she walks down the aisle and she tosses this during the reception. For the invitation template above, half of the design shows a photorealistic image of the bridal bouquet which adds to the overall beauty of this design.

What Is a Bridal Shower?

A bridal shower is an event that is held in honor of an unmarried woman who is soon to be wedded to her fiancée. Just like baby showers wherein gifts are given by the guests in anticipation of the baby’s birth, bridal showers are originally intended for guests to give gifts to the bride-to-be in anticipation of her wedding. Though this was what bridal showers were intended to be, it has now become something that is more extravagant and exciting with the inclusion of games and other activities.

According to experts, the tradition of throwing bridal showers originated in the 1890’s wherein goods are provided for the upcoming matrimonial household. Some would even say that this originated as a modified version of the dowry system that were once practiced by different cultures.

Today, bridal showers are very common all over the world regardless of their culture, though they may also have their own twist to the celebration. But one thing’s for certain, bridal showers are almost always attended exclusively by women, unless maybe specifications are indicated by the host that men are also permitted to attend. You may also see wedding card templates. 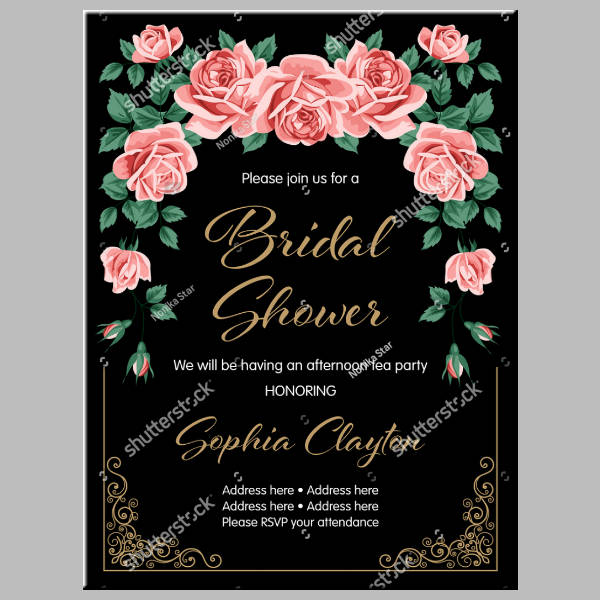 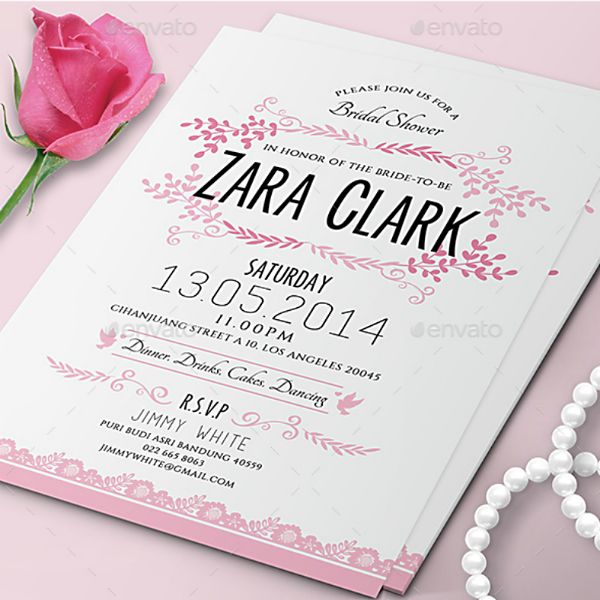 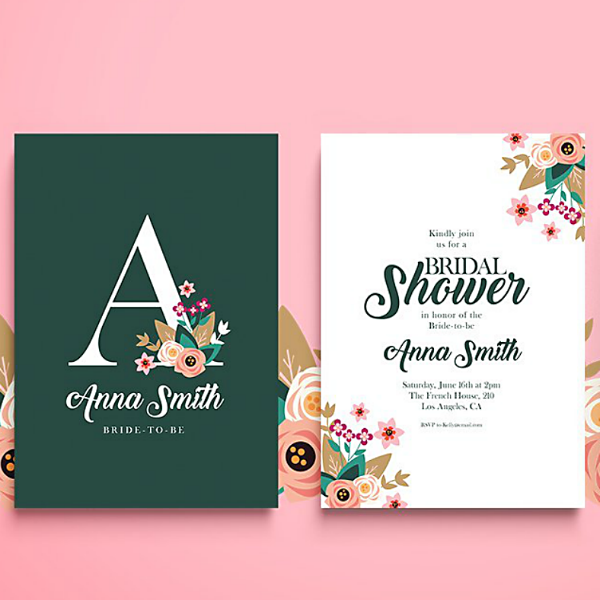 If you want simple but also symbolic, go with the elegant bridal shower party invitation above. The design on this template is very simple wherein the use of elements are kept at a minimum, but also symbolic in a way that it uses a lettermark theme. 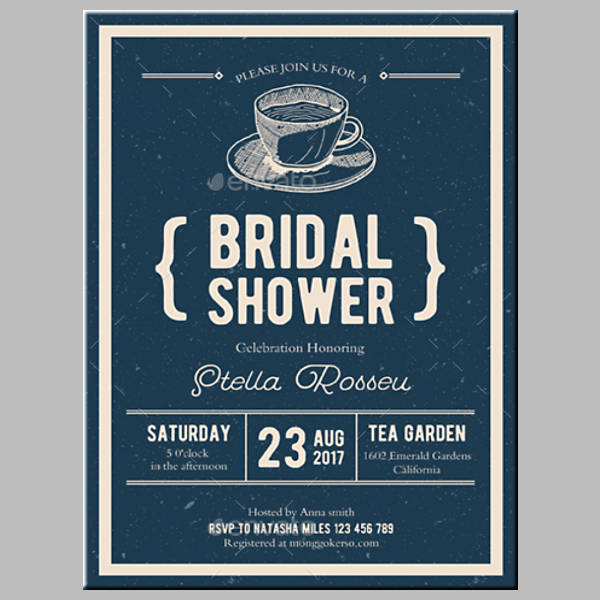 What Can You Expect From Bridal Showers?

1. Bridal showers are commonly thrown by someone within the bride’s entourage, which means there is a very likely chance that it will be planned by the bridesmaids. Though there have also been instances wherein the bridal shower is planned by a family member or friend who is not a member of the bridal party.

2. Bridal showers are always exclusive for female attendees only, and instances of having men attend bridal showers are very unlikely, unless you include the male dancer. On the other hand, the groom and his party will also have their own exclusive event, and this is the bachelor’s party. You may also see bridal shower invitation templates.

3. Almost always, the bride will have no idea regarding the bridal shower, which means they can always expect it at any day. But very commonly, bridal showers are held two to three days before the wedding day. You may also see PSD bridal shower templates.

4. Bridal showers will involve a lot of food and drinks considering that it is, in fact, a party to celebrate the bride’s last few days of being single. The food will range from finger snacks to sandwiches and even actual meals, depending on the host. And for the drinks, these will almost always include alcoholic beverages such as wine, champagne, and beer. You may also see printable bridal shower samples.

5. You can also expect to see guests bringing gifts for the bride during the bridal shower. The gifts involved here will most likely have an adult theme such as lingerie, sex toys, or condoms. But of course, guests may still be allowed to give more practical presents such as clothes, gift cards, or even glassware.

6. What would a party be without games? During bridal showers, you can definitely expect a few games to keep the guests engaged. The games that will be included here will also very likely have an adult theme considering that the party itself will usually be attended by adults. You may also see wedding shower invitations. 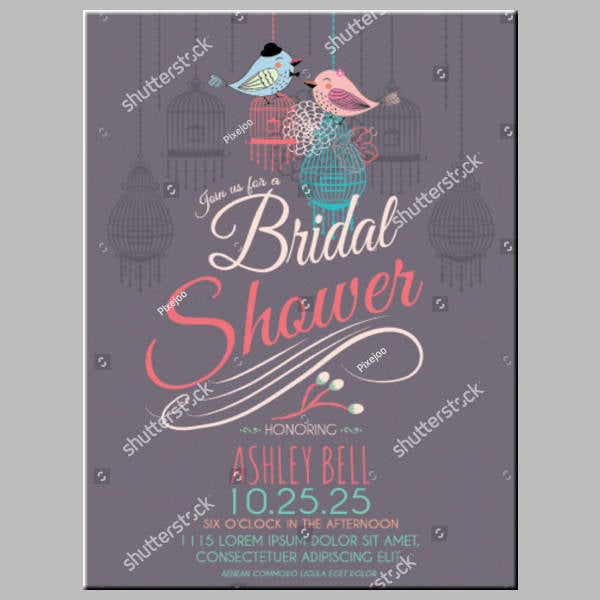 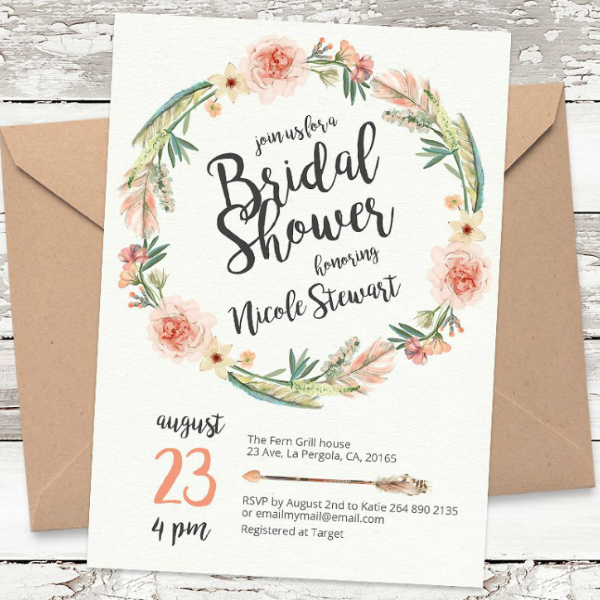 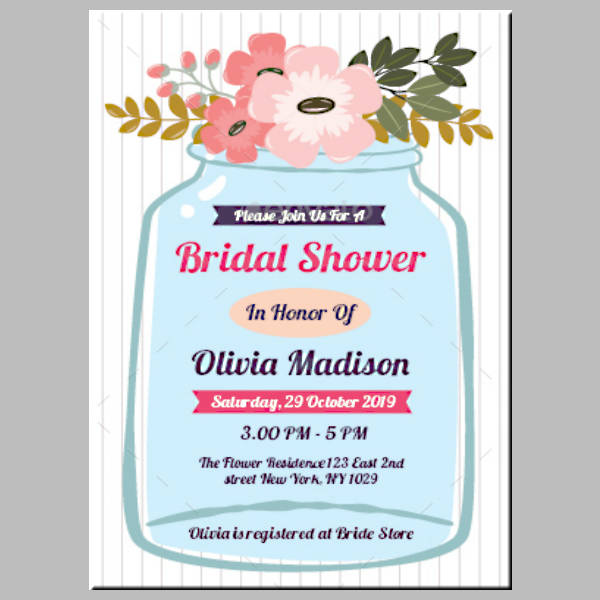 Importance of the Use of Invitations

Invitations are also highly informative, and you don’t even need to exert a lot of effort just to convey those information. Instead of having to tell each and every invitee the information that they need to know about the event, you will only need to indicate these information on the invitation and print multiple copies of it. But aside from that, sending invitations is also the most proper way of inviting people. You may also see bridal shower thank you cards.

And lastly, invitations are tangible and can double as a souvenir that the guests can keep after the event. Yes, email invitations nowadays can be conveniently sent through the internet, but this somehow takes a bit of the value away. This is absolutely the reason why it is very important to design your invitation cards at its best so that they can really be worth treasuring. 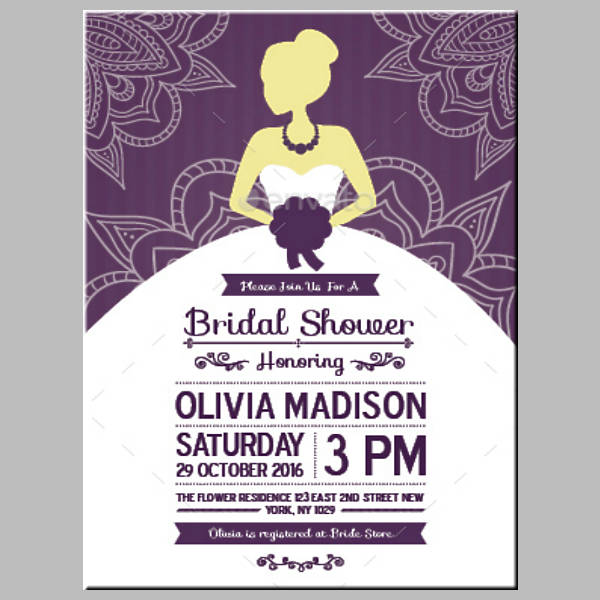 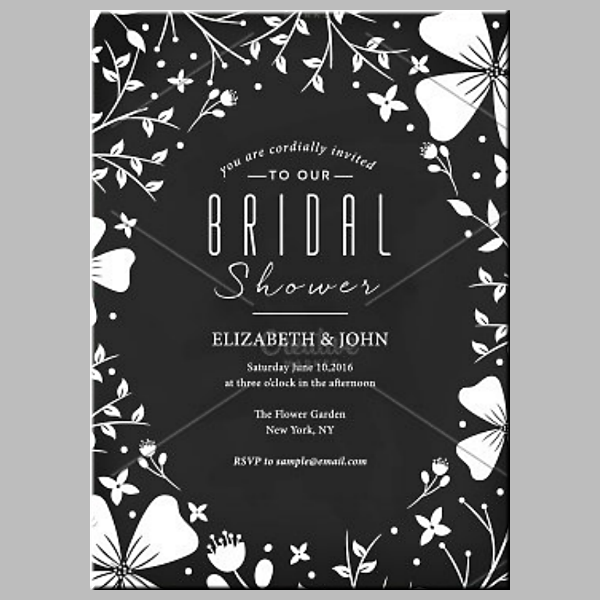 If you want simplicity at its best, then you might want to use the invitation design template above. This template uses an achromatic color scheme and relies on the arrangement of the elements to make the design visually appealing. 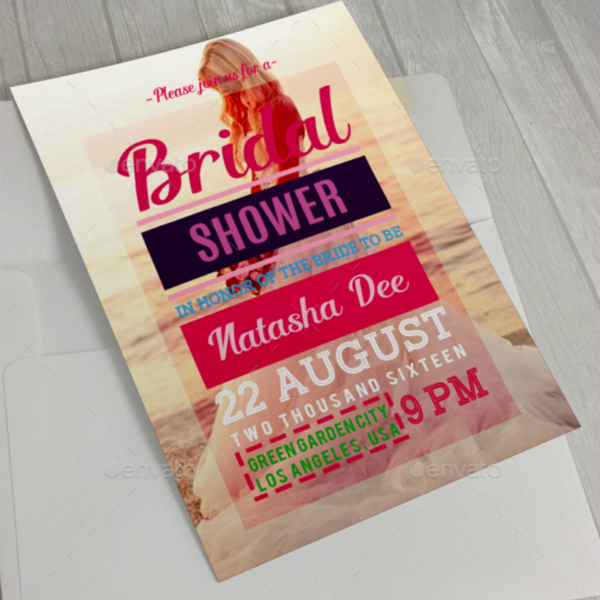 Take advantage of the photos taken during the pre-nuptial pictorial and use it as the background image of your invitation as seen on the sample above. If you can pull this off effectively, then your invitation card may probably end up looking like a book cover or movie poster.

How to Plan a Bridal Shower?

By now, you probably already have an idea on what to expect during bridal showers, which is already able to answer partly the “what” question. But let’s elaborate further on the other aspects when it comes to bridal showers. This way, we’ll be able to know how to plan a bridal shower properly. You may also see beautiful bridal invitations.

You may be wondering who should throw the bridal shower, and the answer to that—according to etiquette—is the bride’s maid of honor. According to traditionalists, bridal showers that are hosted by a family member themselves is improper since it comes as rather rude or greed for the family to ask for gifts for their own relative. When it comes to the expenses and the overall preparation of the event, the host may and probably should ask for assistance from the bridesmaids. You may also see printable wedding cards.

With regards to the venue, bridal showers can actually be held anywhere, from a dance club to the bride’s own home. It is up to the host on where they want to throw the party, and they should always coordinate with whoever is in charge of the place. If it takes place in a house, then the owner should be informed so that the male members of the household will have enough time to figure out where to go or stay while the party is going on. Otherwise, reservations should be made if the bridal shower is held someplace else. You may also see bridal shower thank you notes.

And lastly, to answer the “who” question, you can actually invite any female friend or family member of the bride considering that they are aware of the wedding. If you want to keep it personal or intimate, then you can always refer to the wedding’s guest list and invite the female invitees to the bridal shower. Usually, the bride has the copy of this guest list and if you want the party to be a surprise, then you can always ask it from either the bride’s mother or the fiancé. And once again, it’s your call as the host to decide whether or not you would want male guests to the party. If so, then indicate it on the bridal shower invitation.