In the workplace, sometimes it becomes necessary to send warnings to employees so as to maintain discipline, especially in cases where infractions have been committed. Of course, it is to be expected that staff warning letters are meant to be used so as to provide a measured response to such infractions. After all, it would generally be unwise to resort to drastic measures after only one offense.

As such, first warning letters would be an excellent method for dealing with such issues, being that they can provide exactly that measured response to infractions. Of course, even if you have taken every step to salvage repeat offenders, at some point you would have to rely on final warning letters to provide one last chance for your employees. In a way, you could be seen as cutting your losses after having done everything in your power to salvage such employees. 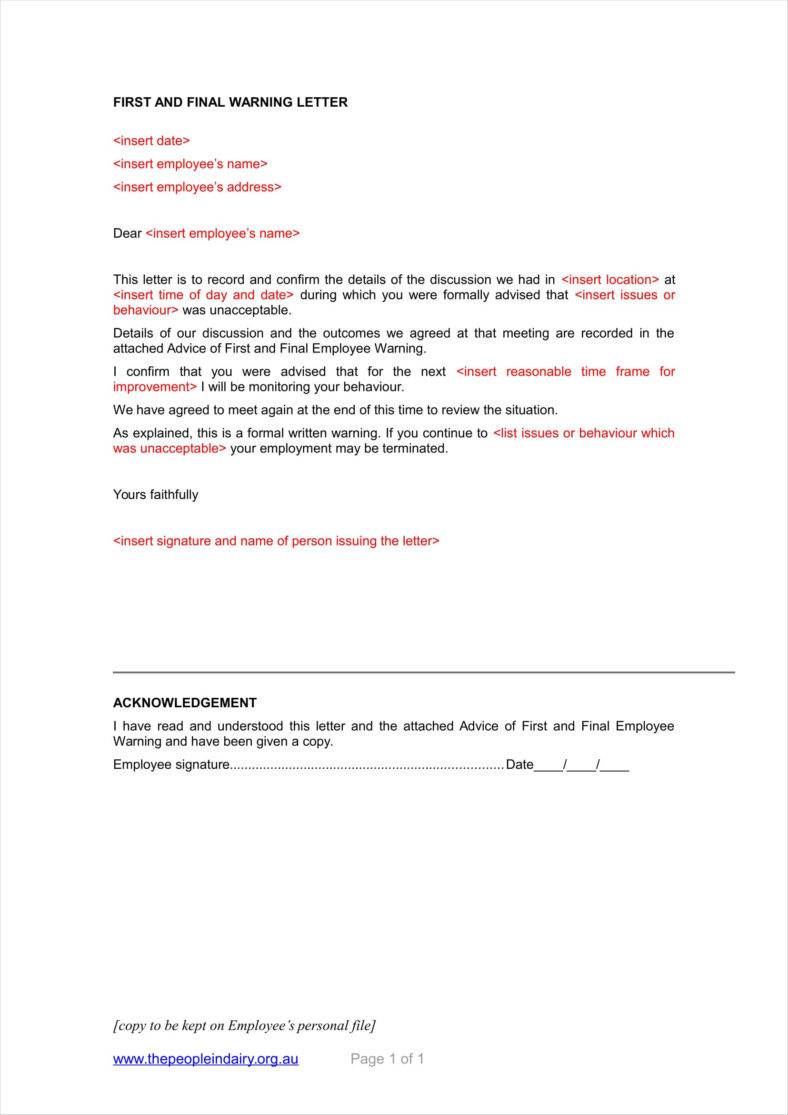 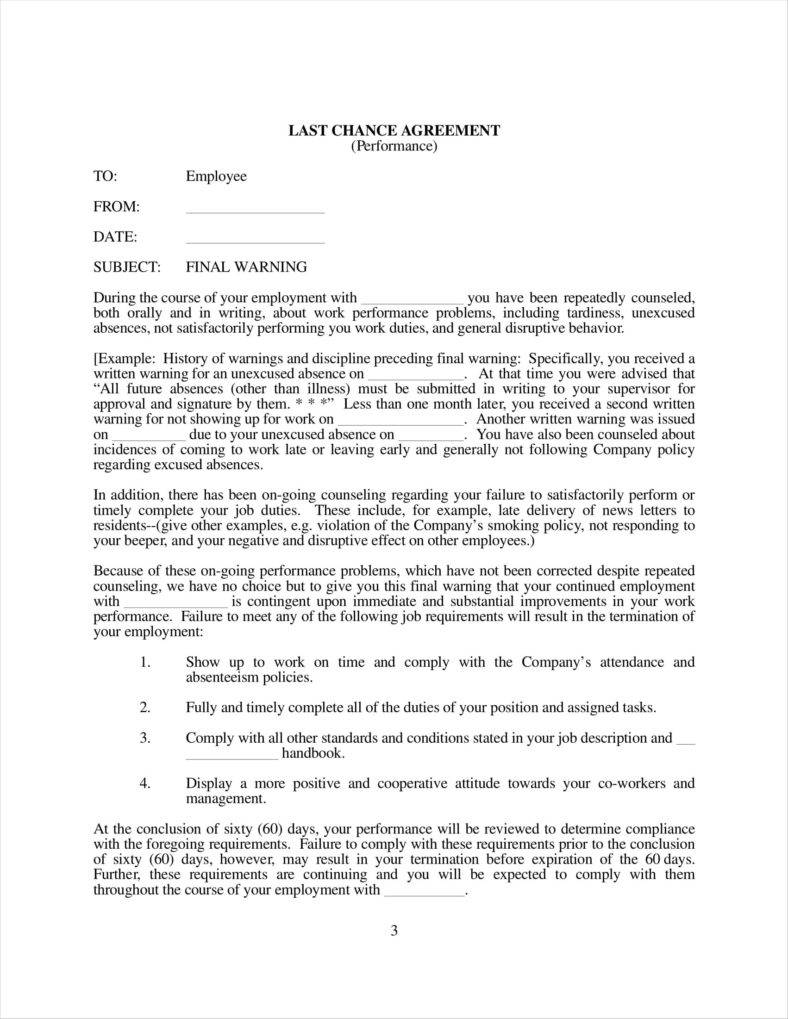 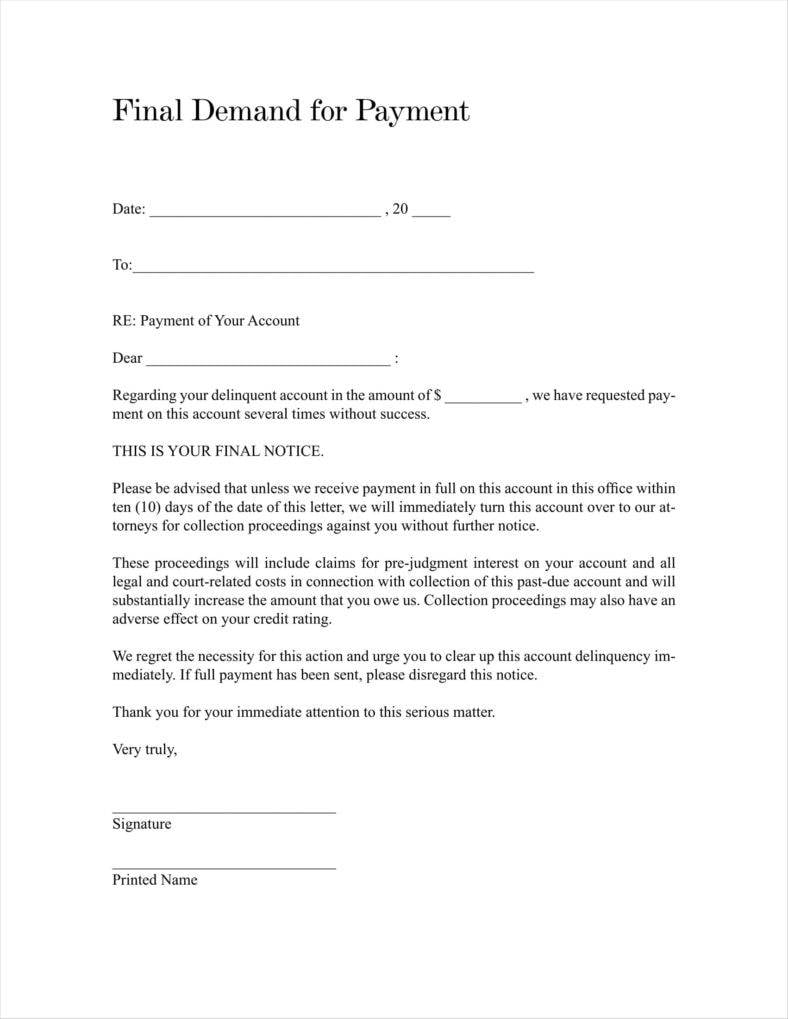 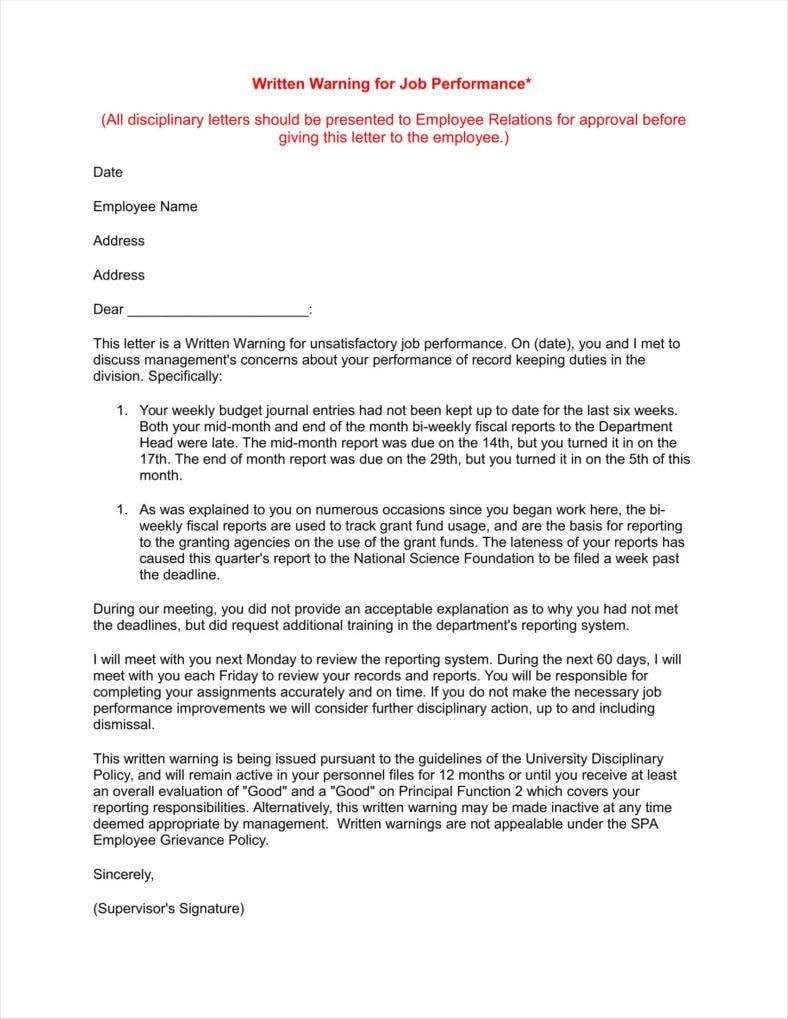 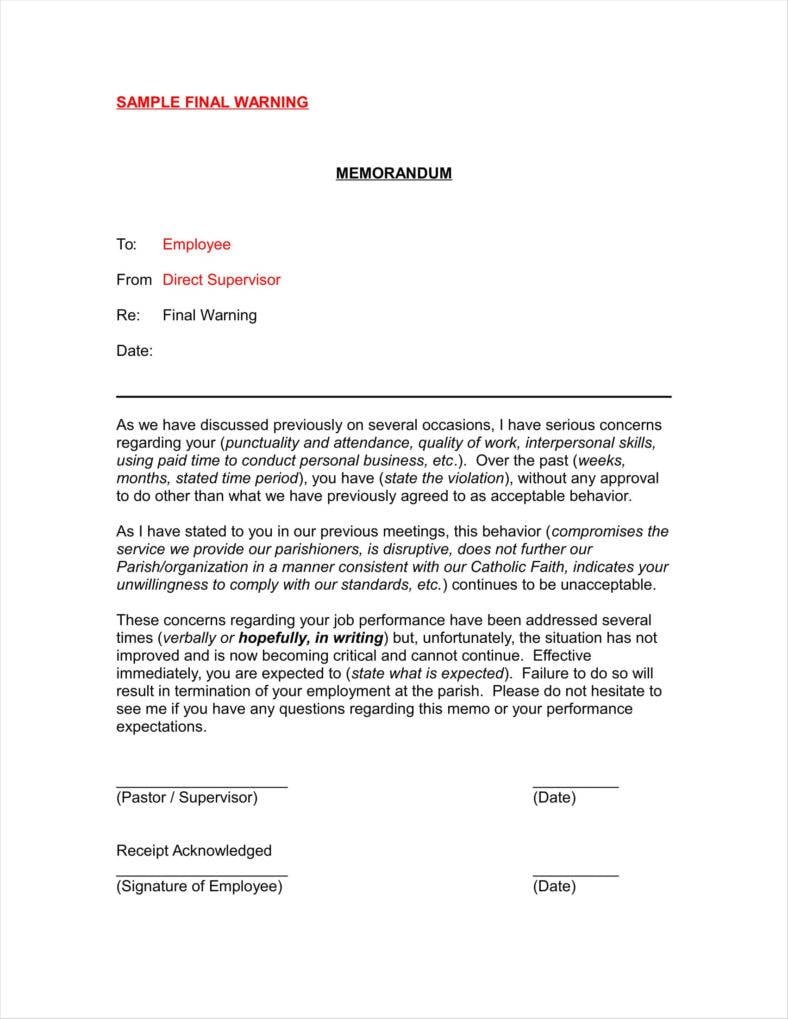 Why You Would Send Final Warning Letters

If you are in any kind of position of leadership, you would know that tools like HR warning letters are occasionally necessary in order to maintain discipline among employees. Of course, being that final letters naturally have an air of finality to them, they are clearly not tools to be used lightly. With that in mind, it would be wise to know when you can use such warning letters so as to use them most effectively.

In the case of repeat offenses.

In many cases, you can send letters such as performance warning letters whenever you have cause to warn your employees of any conduct that may merit further warnings or punishments, particularly if that is reoccurring behavior. Of course, and this ought to come up in such letters, things may reach a point where you may have no choice but to resort to sending final warning letters if you do not see enough improvement. In such cases, it should be clear that you have done everything in your power to deal with the problem, which has only continued to escalate further.

In the event of serious offenses.

In the case of different job warning letters, it is understood that there are different levels of offenses that employees can commit. Naturally, more heinous offenses merit more serious punishment. In such cases, it may be necessary to dispense with additional warnings and provide only a single warning, in light of the seriousness of such offenses. This should be understood that this letter is a first and final warning so as to impress the gravity of the offense and your zero-tolerance approach to it.

So as to provide a final lifeline.

Any final warning letter should also be understood by all to be a given employee’s final chance to retain their employment with their company. As such, your letter needs to be seen as providing one last chance for them to turn themselves around and shape up. This is only fair, as the employee would need to make an effort to do so, but you do need to provide at least one last chance for them to do.

To make one last effort to salvage that employee.

Your official warning letters are also the last chance on your part, as this is one last chance on your part as well. After all, the argument can be made that your previous warnings were based on a desire to keep the employee within your company. As such, this warning can also be seen as your last attempt to keep that employee before making any decision to retain them or not depending on whether or not that employee has become more trouble than he is worth. 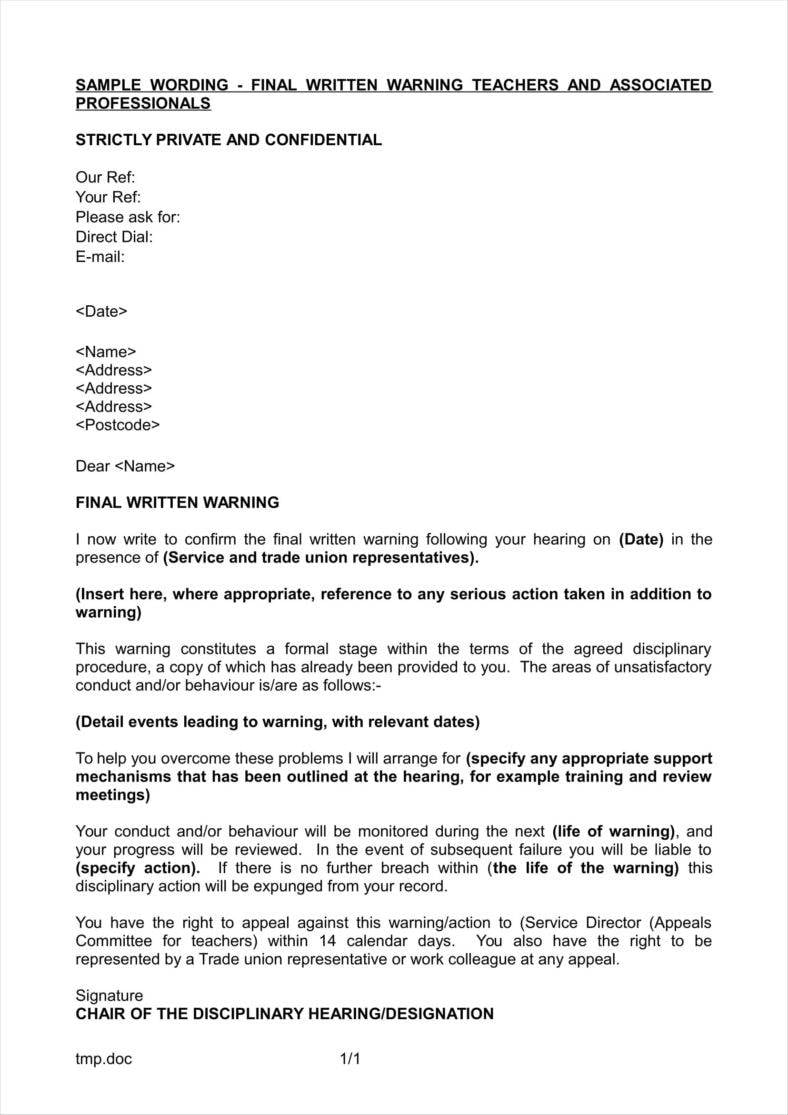 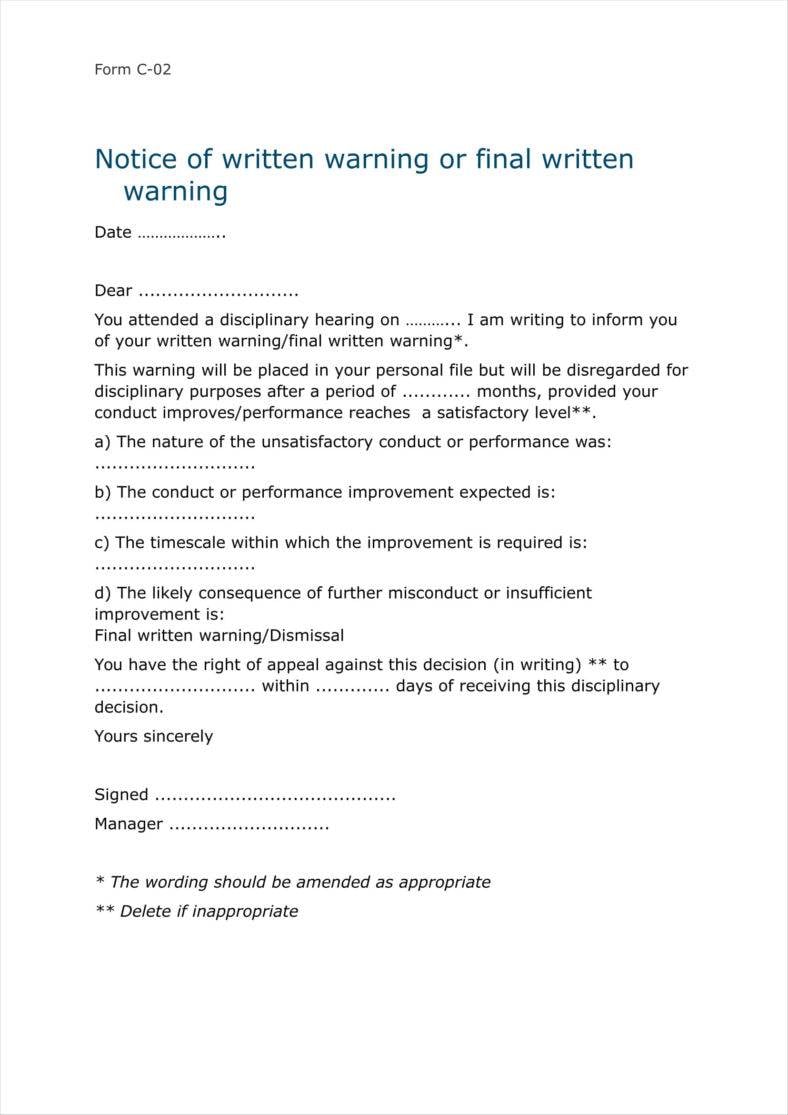 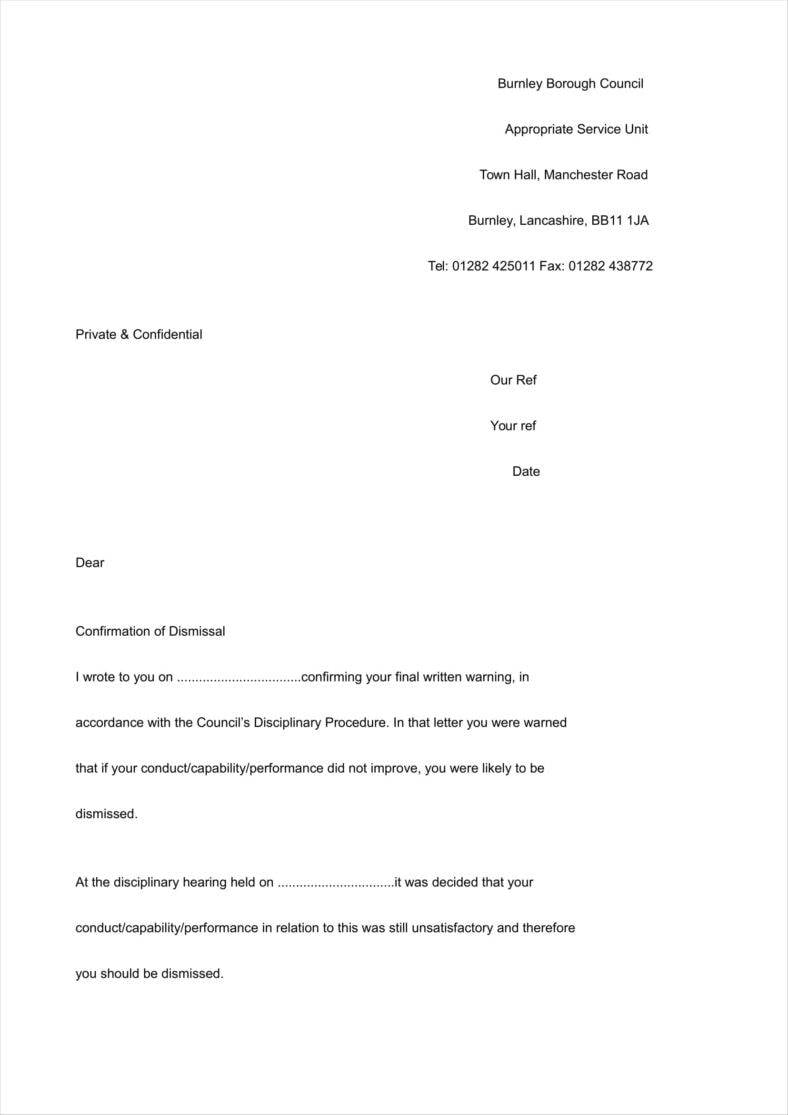 Like other kinds of documents you could make, there are a number of tips you can use so as to help improve your writing of final warning letters. These particular disciplinary warning tips and samples should help make sure that your letters are written according to standards so as to contribute to avoiding potential problems down the road.

Make sure to refer to previous disciplinary actions.

As you may have seen in other warning letter examples, it is important that you always refer to previous actions you took to address the issue at hand. This matters as it helps create a sense of continuity between those previous actions and this final warning. Put simply, this shows that you have taken actions to to address the issue, apparently to no avail, hence the writing and sending of this letter. This all serves to show that your particular final warning letter is not something made lightly, and is a last-ditch response to a continuing situation.

Be sure to cite specific instances of employee offenses.

Printable employee warning notices should always take care to be specific when citing any previous instances of employee infractions. After all, if you are to cite instances that merited sending warning letters in the past, it helps to be specific so as to help your own case. Citing such instances ensures that you can establish a specific pattern of behavior that has generally persisted up to this point, hence the need to make a final warning in the first place.

Always include your expectations.

In order to help your employee improve their behavior, it pays to include clear expectations so as to give them concrete goals to work toward. This is true even of final warning letters. If you are still bent on keeping that employee, you would need to provide them with your expectations as to what improvements need to be made. This also serves to make your employees understand that their continued employment is conditional upon such improvements, which would serve to underline how far the situation has escalated.

In the name of fairness, your final employee warning letters should also provide a set period to give your employees time to improve their performance. For example, you may set the time to roughly 60 days to see if your employees can meet your expectations. Of course, you should also make it understood that any further escalations can lead to the termination of their employment within the period. You should also make clear that employees should have shown marked improvement within that probationary period so as to show signs of putting in the effort.

Also, include the option of appealing the decision.

In less serious cases, you may elect to provide employees with the opportunity of appealing your final warning. In such cases, you should also take the time to inform them that they may also bring representation of some kind with them to the appeal hearing, so as to provide a fair chance for the employee to provide their side of the issue. 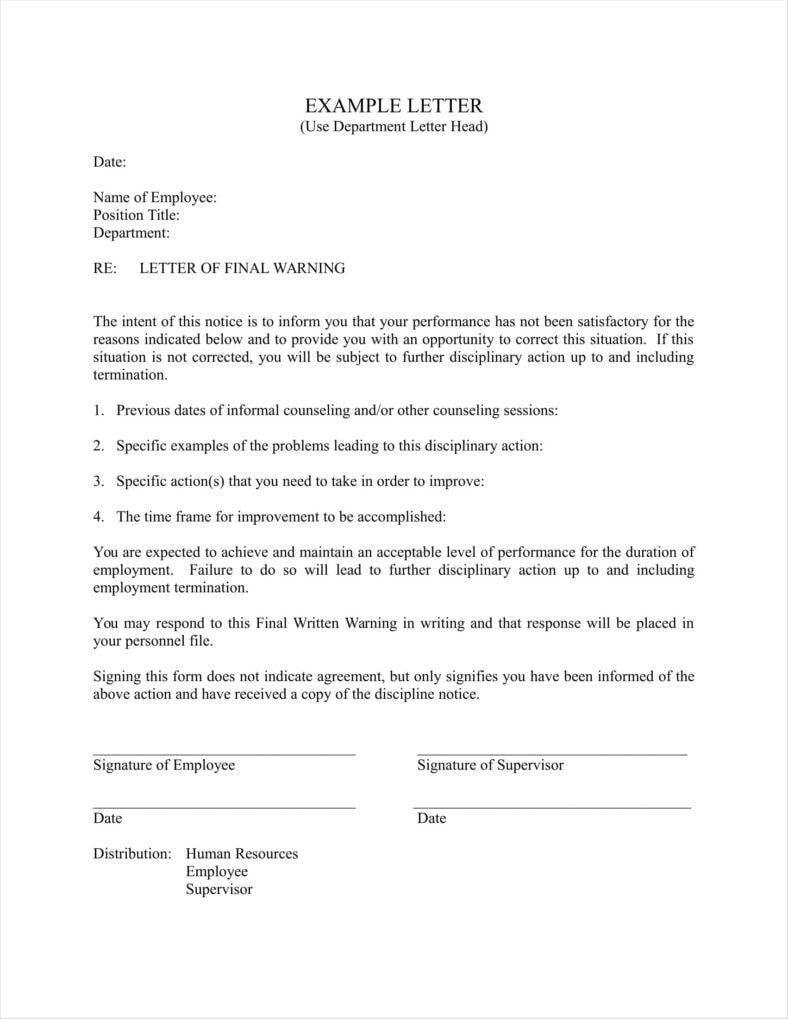 Who Can Use Final Warning Letter Templates?

While many of these printable written warnings are primarily meant to be used in a workplace setting, that is not to say that that is the only place where one can expect to find final warning letters being used. After all, there are a number of different positions which could find a use for such warning letters in order to maintain discipline among their subordinates, which can include:

Since many examples of final warning letters are themselves business warning letters, it is unsurprising that managers could find uses for these letters themselves. After all, it is more than possible that managers may need to maintain discipline among the employees under them. In the case of employees, it would be pragmatic to take every step to retain them, which is part of the reason why managers and employers ought to rely on such tools to begin with.

Landlords may also need such letter forms. Much like employees, tenants could be capable of different kinds of infractions that could prove troublesome for their landlords, such as property damage, noise, and others. In such cases, it may be necessary for landlords to send final warning letters before finally taking steps to evict such tenants from the premises.

Business partners may also be able to send these letters to one another, assuming that one party has committed offenses of some kind against the other. After all, it is entirely possible for such offenses to be grounds for breaking off partnerships. Of course, it would be wise to provide fair warning first in the form of final warning letters so as to avoid taking one’s partners by surprise.

These insights may well go some way to explaining how to make better use of final warning letters. After all, these insights should provide you with more knowledge on how they operate, which should be an aid for learning when, where, and how to use them.