Are you looking for a great simple contract template, then know that you do not have to look far to find one. Regardless of what your specific use for it may be, we guarantee only the utmost satisfaction once you take a closer look at the product we have in store exclusively here on Template.net. What we can assure you, in addition to its marvelous simplicity, would be the fact that our template is professionally-designed to be as easily editable and printable as possible. Act now and buy our subscription plan so you can get yourself a high-quality Simple Contract template in file formats like Google Docs, Apple Pages, and MS Word.

What Is a Simple Contract?

A simple contract are contracts that are made either in writing or verbally. This contrasts those made under seal. It needs consideration to become valid, although they can also be implied from the conduct of parties that are bound by the contract. The use of this document extends to a wide variety of areas, including employment contracts, construction contracts, and payment schedules. Speaking of its oral aspect, it was back in 1828 when the Parliament of the United Kingdom first amended the statute of frauds, preventing the use of oral acknowledgments as evidence of an existing simple contract.

How to Write a Simple Contract 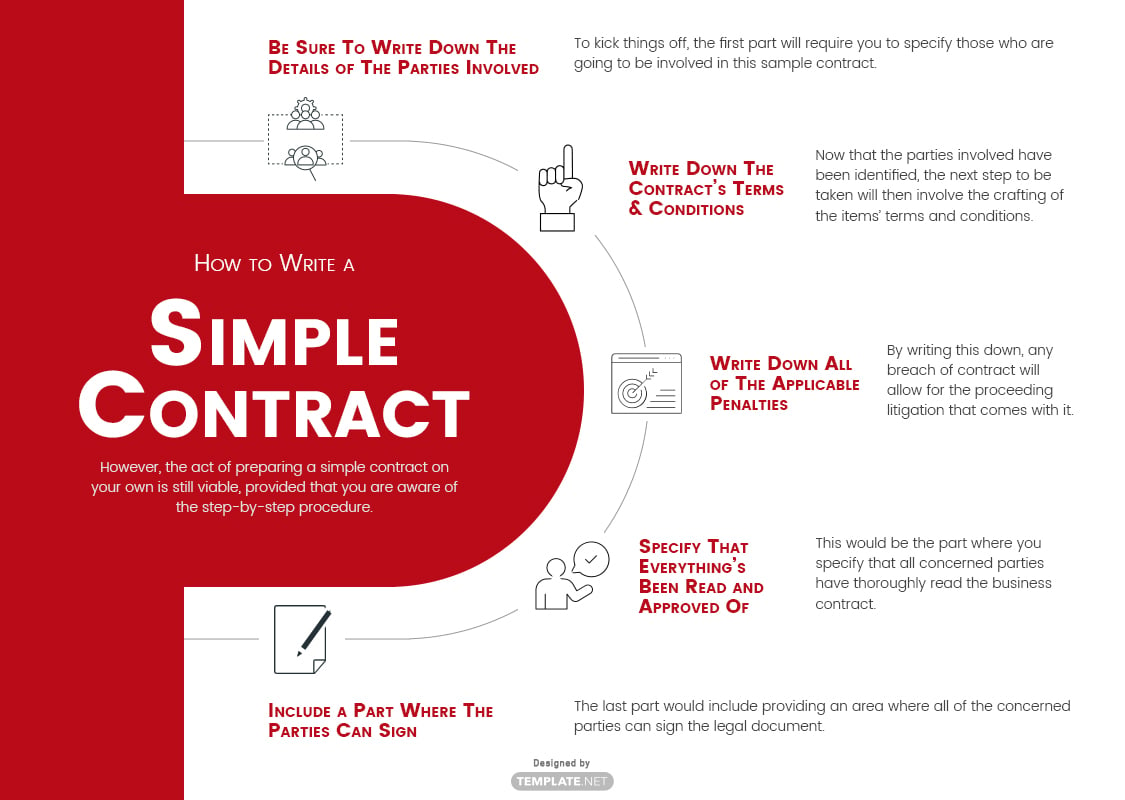 The act of writing a simple contract is something that most would consult a lawyer or an attorney for. This is because of how complex even the simplest contracts can be and having a professional that’s trained in its intricacies will ensure that nothing goes wrong with whatever it is that you want to get into. However, the act of preparing a simple contract on your own is still viable, provided that you are aware of the step-by-step procedure. Regardless of what your specific purpose for this document is, know that the following instructions are guaranteed to help you out and are general enough to fit more than one specific need.

1. Be Sure To Write Down The Details of The Parties Involved

To kick things off, the first part will require you to specify those who are going to be involved in this sample contract. That would mean writing down the legal names of everyone, in addition to any of their valid addresses.

3. Write Down All of The Applicable Penalties

In the event that either one of the concerned parties is unable to fulfill the consideration, then applicable penalties must be specified and then enacted. By writing this down, any breach of contract will allow for the proceeding litigation that comes with it.

4. Specify That Everything’s Been Read and Approved Of

This would be the part where you specify that all concerned parties have thoroughly read the business contract and have consensually given their approval to it. A step like this should not be neglected since this is quite useful in the case of litigation: parties would then be able to claim that they were not made aware of any terms and conditions in such an event.

The last part would include providing an area where all of the concerned parties can sign the legal document. This act is typically done in the presence of an attorney, who can attest to the legally-binding nature of it all.